John Robert McCloskey (September 14, 1914 – June 30, 2003) was an American writer and illustrator of children's books. He wrote and also illustrated nine picture books, and won two Caldecott Medals from the American Library Association for the year's best-illustrated picture book. [1] [2] Four of the nine books were set in Maine: Blueberries for Sal, One Morning in Maine, Time of Wonder, and Burt Dow, Deep-water Man; the last three were all set on the coast. His best-known work is Make Way For Ducklings , set in Boston. In longer works, he both wrote and illustrated Homer Price and he illustrated Keith Robertson's Henry Reed series. [lower-alpha 1]

McCloskey was born in Hamilton, Ohio, in 1914 to Howard and Mable McCloskey. He had two sisters, Melba and Dorothy. [3] [4] He reached Boston in 1932 with a scholarship to study at Vesper George Art School. After Vesper George, he moved to New York City for study at the National Academy of Design. [1]

In 1940, he married Peggy Durand, daughter of the children's writer Ruth Sawyer. [1] They had two daughters, Sally and Jane, and settled in New York State, spending summers on Scott Island, a small island off Little Deer Isle in East Penobscot Bay. [5] McCloskey's wife and elder daughter Sally are the models for little Sal and her mother in Blueberries for Sal (1948), a picture book set on a "Blueberry Hill" in the vicinity. Three others of his picture books are set on the coast and concern the sea.

McCloskey won the 1942 Caldecott Medal for Make Way for Ducklings . The story, set in Boston, Massachusetts, features a mallard pair that nests on an island in the Charles River. After raising eight ducklings on the island, the mother leads them to the Public Garden downtown. A friendly policeman stops traffic to let them cross a busy street. The story soon became a Boston institution. Sculptor Nancy Schön created a bronze statue of Mrs. Mallard and the ducklings in 1987, installed along a walkway between pond and street. [6] There thousands of children climb them every year and many more people photograph them; the park is also the annual site of a Make Way for Ducklings Mother's Day parade, featuring hundreds of children dressed in the costumes of their favorite characters. Since 2003 Make Way for Ducklings is the official children's book of Massachusetts. [7]

McCloskey won a second Caldecott Medal in 1958 for Time of Wonder . Meanwhile, he had been a runner-up in 1949 for Blueberries for Sal , in 1953 for One Morning in Maine , and in 1954 for JourneyCake, Ho!, the latter written by his mother-in-law Sawyer. [2] In a 1958 magazine article titled "Bob McCloskey, Inventor", another Medal winner Marc Simont observed that "[his] talent for devising mechanical contraptions is topped only by his ability to turn out books that carry off the Caldecott Medal." [8]

The Homer Price stories (two books) were translated into Russian-language in the 1970s and became popular in the Soviet Union. [9]

In 1964, film producer Morton Schindel and Weston Woods Studios made Robert McCloskey, an 18-minute documentary that is sometimes screened in art schools. It shows McCloskey sitting in Boston Public Garden intercut with pages from his sketchbook drawings for Make Way for Ducklings, while the illustrator recounts experiences that influenced his work and discusses the relationship of craftsmanship to inspiration. [13]

In Boston Public Garden a sculpture of a family of nine ducks, by the sculptor Nancy Schön, installed in 1987, commemorates McCloskey's Make Way for Ducklings. [17] A version was installed in Moscow in 1991. In Hamilton, Ohio, McCloskey's hometown, another sculpture by Schön, installed in 2002, depicts a boy and dog from McCloskey's first book, Lentil, published in 1940. McCloskey named the boy Lentil, but in a competition among schoolchildren the dog was given the name Harmony. [18] In Boothbay Harbor, Maine, in the Coastal Maine Botanical Gardens, another sculpture by Schön, dedicated in 2010 and known as Sal's Bear, depicts a baby bear and a nearby spilled pail of blueberries, based on the drawings in McCloskey's Blueberries for Sal. [19]

As author and illustrator

The Vesper George School of Art in Boston, Massachusetts, United States, closed in 1983. For many years the school contributed to the Boston art community, training many talented artists, many of whom are still active in both commercial art and fine arts. In addition to training artists, it served to allow many artists to maintain a living as instructors while they were building their careers. 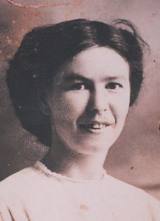 Ruth Sawyer was an American storyteller and a writer of fiction and non-fiction for children and adults. She may be best known as the author of Roller Skates, which won the 1937 Newbery Medal. She received the Laura Ingalls Wilder Award in 1965 for her lifetime achievement in children's literature.

Donald Alan Schön was a philosopher and professor in urban planning at the Massachusetts Institute of Technology who developed the concept of reflective practice and contributed to the theory of organizational learning.

Make Way for Ducklings is a children's picture book written and illustrated by Robert McCloskey. First published in 1941, the book tells the story of a pair of mallards who decide to raise their family on an island in the lagoon in Boston Public Garden, a park in the center of Boston.

Domestic ducks are ducks that are raised for meat, eggs and down. Many ducks are also kept for show, as pets, or for their ornamental value. Almost all varieties of domestic duck apart from the Muscovy duck are descended from the mallard. 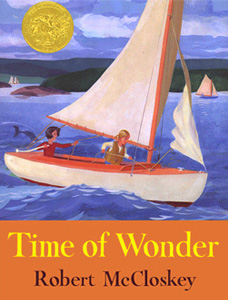 Time of Wonder is a 1957 children's book written and illustrated by Robert McCloskey that won the Caldecott Medal in 1958. The book tells the story of a family's summer on a Maine island overlooking Penobscot Bay, filled with bright images and simple alliteration. Rain, gulls, a foggy morning, the excitement of sailing, the quiet of the night, and the sudden terror of a hurricane are all expressed in this book. This was McCloskey's second Caldecott, the first being Make Way for Ducklings in 1942.

Blueberries for Sal is a children's picture book by Robert McCloskey. It was awarded the Caldecott Honor in 1949.

Weston Woods Studios is a production company that makes audio and short films based on well-known books for children. It was founded in 1953 by Morton Schindel in Weston, Connecticut, and named after the wooded area near his home. The company's first project was Andy and the Lion in 1954, and its first animated film was The Snowy Day in 1963. Starting in 1968, Weston Woods began a long collaboration with animator Gene Deitch and opened international offices in Henley-on-Thames, England, UK, in 1972; Canada in 1975; and Australia in 1977. In addition to making the films, the company also conducted interviews with the writers, illustrators, and makers of the films. The films appeared on children's television programs such as Captain Kangaroo, Pinwheel, The Great Space Coaster, Lunchbox, Eureeka's Castle, and Mister Moose's Fun Time. In the mid-1980s, the films were released on VHS under the Children's Circle titles, and Wood Knapp Video distributed these releases from 1988 to 1995.

Keith Carlton Robertson (1914–1991) was an American writer of children's books and murder mysteries. He was a former captain in the United States Navy.

Nancy Schön is a sculptor of public art displayed internationally. She is best known for her work in the Boston, Massachusetts area, notably her bronze duck and ducklings in the Boston Public Garden, a recreation of the duck family in Robert McCloskey's children's classic Make Way for Ducklings. It is featured on the Boston Women's Heritage Trail. In 1991, Barbara Bush gave a duplicate of this sculpture to Raisa Gorbachev as part of the START Treaty, and the work is displayed in Moscow's Novodevichy Park. 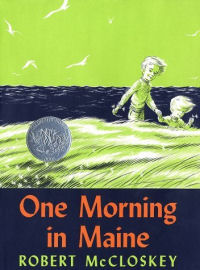 One Morning in Maine is a picture book by Robert McCloskey set in Brooksville, Maine. It was awarded the Caldecott Honor in 1953. It features Robert McCloskey, his wife Peggy, and their two real-life daughters, Sarah ("Sal") and Jane. McCloskey was a professional illustrator, and drew his wife's and daughters' facial-features to accurately show what they really looked like. McCloskey also cleverly depicts the adventurously-rambunctious little Jane in his drawings of their mainland adventures; on every page, the robust tousle-headed toddler is usually shown to be exploringly bustling about independently of the two others in her group, engaged in "typical young tomboy" activities such as perching high up on a work-table, climbing on a stack of tires, snuggling with a furry puppy who has wandered into the garage, etc.

Marla Frazee is an American author and illustrator of children's literature. She has won two Caldecott Honors for picture book illustration.

Camp Campbell Gard is a YMCA camp located on 600 acres (2.4 km2) along the Great Miami River six miles (10 km) northeast of Hamilton, Ohio. The camp is on Augspurger Road in St. Clair Township.

A Big Mooncake for Little Star is a 2018 picture book written and illustrated by Grace Lin. The story is about Little Star gradually eating the mooncake that her mother has baked. The book was a departure for Lin both thematically and in her use of illustrative style. The book was well reviewed and was awarded a Caldecott Honor. The illustrations feature heavy use of black and rely on both the pictures and words to convey the story and its themes.

Journey Cake, Ho! is a 1953 picture book written by Ruth Sawyer and illustrated by Robert McCloskey. The book tells the story of a boy who chases a journey cake around a farm. The book was a recipient of a 1954 Caldecott Honor for its illustrations. 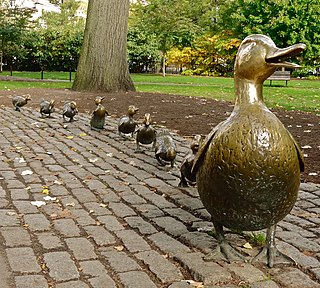