Robert Mueller Municipal Airport( IATA : AUS, ICAO : KAUS, FAA LID : AUS) (1930–1999, /ˈmɪlər/ "Miller") was the first civilian airport built in Austin, Texas, United States. It was replaced as Greater Austin's main airport by the Austin–Bergstrom International Airport, which is located on the site of the former Bergstrom Air Force Base. [2] A few miles northeast of downtown Austin, the airport was named after Robert Mueller, a city commissioner who died in office in January 1927. [5] [6] Robert Mueller Municipal Airport was identified with the airport code AUS, which was reassigned to Austin–Bergstrom International Airport in 1999.

As the need for commercial air service became clear in the 1920s, the 1928 Austin city plan called for the establishment of a municipal airport. Austin voters supported a bond election to fund the airport (among other projects) later in 1928. The airport was constructed a few miles northeast of downtown, on what was then the edge of the city. The airport began operation on 14 October 1930; airline flights began in 1936. [1]

In the 1950s, developers began building housing beneath the flight paths of Mueller and airport traffic increased as the city grew. The April 1957 OAG lists 33 weekday departures on three airlines: fifteen on Braniff International Airways, ten on Trans-Texas Airways (TTa) and eight on Continental Airlines. Nonstop flights didn't reach beyond San Antonio, San Angelo, Dallas Love Field or Houston Hobby Airport. The first scheduled nonstop beyond Texas was a Braniff Boeing 727 to Washington Dulles Airport in 1968; that flight lasted until 1980. It was the only nonstop out of the state until Braniff tried a Chicago O'Hare Airport nonstop in 1978.

In early 1976, the same three airlines were at AUS (Trans-Texas Airways had changed its name to Texas International Airlines). [11] Braniff was operating up to eight nonstops a day to Dallas/Fort Worth International Airport with Boeing 727-100s and 727-200s, the nonstop 727 to Washington Dulles Airport, and a nonstop 727-200 to San Antonio. Braniff 727s flew one-stop direct to Chicago O'Hare Airport, New York JFK Airport, Kansas City, Memphis and Amarillo and direct, multi-stop to Detroit, Newark and Washington National Airport. All of the Continental service was being operated with Boeing 727-200s, nonstop three times a day to Houston Intercontinental Airport and to Midland/Odessa, and one stop to Miami and El Paso. Continental was also operating direct, multi-stop service several times a day to Los Angeles (LAX), Phoenix and Tucson, and later flew Boeing 720Bs to Mueller on the multi-stop route between IAH and LAX. Texas International was flying nonstop Douglas DC-9-10s to Dallas/Ft. Worth International Airport, Houston Intercontinental, Lubbock and San Antonio with one-stops to Albuquerque, Amarillo, Corpus Christi, Laredo and Little Rock. Texas International also flew direct, multi-stop DC-9s to Denver and Los Angeles and nonstop Convair 600 turboprops to Houston in addition to its DC-9 service on the route. By 1979, Texas International was flying McDonnell Douglas DC-9-30s and DC-9-10s and all airline flights from Mueller were operated with mainline jets. [12]

On February 13, 1978 Southwest Airlines, operating as an intrastate airline at this time, began Boeing 737-200 service to Mueller. [13] In July 1978, Southwest was flying nonstop from Austin to Dallas Love Field, Houston Hobby, Corpus Christi and Harlingen. [14] In 1979, Delta Air Lines and Eastern Air Lines began serving Austin, both airlines flying nonstop to Atlanta with Eastern also operating nonstop to Houston Intercontinental and one-stop to Boston. [12] Delta was operating Boeing 727-200s while Eastern was flying Boeing 727-100 and McDonnell Douglas DC-9-30s to the airport. In 1981, American Airlines began service to Mueller, [15] followed in 1983 by United Airlines and USAir (which was renamed US Airways and subsequently merged with American Airlines). [16] American was flying nonstop to Dallas/Ft. Worth (DFW), Chicago O'Hare, and Corpus Christi during the early 1980s and was operating Boeing 727-100s and 727-200s as well as McDonnell Douglas MD-80 and wide body McDonnell Douglas DC-10 jets into the airport. American introduced Austin's first wide body service with nonstop DC-10 flights to Dallas/Ft. Worth and would later operate the Boeing 767 to DFW from Mueller as well. United was operating nonstop Boeing 727-100s to Chicago O'Hare, Denver, Dallas/Ft. Worth, and San Antonio while USAir was flying nonstop to Houston Intercontinental with one flight a day operated with a Boeing 737-200 with direct, one stop service to Pittsburgh. Other airlines operating jets to Austin during the 1980s included America West Airlines, Emerald Air (which was based in Austin and operated not only independently but also as Pan Am Express), Muse Air and its successor TranStar Airlines, Northwest Airlines, Pan Am, Trans World Airlines (TWA), and Western Airlines. [17] By the late 1980s, every major U.S. air carrier was serving Robert Mueller Municipal Airport with mainline jets.

A major expansion at Robert Mueller Municipal Airport took place in the 1970s, including improvements to the runways and the terminal. Before the expansion, the departure area consisted of 4 to 5 gates, not enclosed but covered by a large awning, and no jetways . [18] Mueller's longest runway was 7,269 feet (2,216 m) long, and by the late 1990s the passenger terminal was at full capacity with 16 gates.

For a number of years, the Texas Army National Guard had facilities at the airport.

Whether the aging Mueller should be relocated to Manor, Texas, was a perennial issue in Austin politics, until the closure of Bergstrom Air Force Base opened another possibility. [19]

Nearby Bergstrom Air Force Base to the southeast of downtown Austin closed as an active military base in 1993, and it was decommissioned as a reserve base in 1996. [20] The primary runway, designed for military cargo and high-performance jets, was left intact and required little work to return to serviceable condition. Smaller military-era buildings at the site were demolished, and a new terminal building and traffic/parking infrastructure was built in their place, creating an international-capable civilian airport to replace Mueller Airport. [20]

The 711 acres (3 km2) [22] of land that once housed the airport sat vacant and unused for more than half a decade until the city approved a development plan. The new Mueller Community broke ground in 2007 and is expected to take at least ten years to be fully developed.

The airport's control tower has been preserved and restored in response to the local community's desire to keep the iconic 1961 structure. [23] The view of the Texas State Capitol from the base of the tower became one of the Capitol View Corridors protected under state and local law from obstruction by tall buildings in 1983, though redevelopment of the Mueller subdivision is exempt from the regulation. [24]

Robert Mueller Municipal Airport also left behind about 20 acres and 10,000 square feet of hangar buildings that have been converted into sound stages and renamed Austin Studios. It is the home to several Austin based film and production companies such as Austin Film Society, Rooster Teeth, and Robert Rodriguez's production company, Troublemaker Studios.

William P. Hobby Airport is an international airport in Houston, Texas, located 7 miles (11 km) from downtown Houston. Hobby is Houston's oldest commercial airport, and was its primary airport until the Houston Intercontinental Airport, now known as the George Bush Intercontinental Airport, opened in 1969. Hobby was initially closed after the opening of Houston Intercontinental; however, it was re-opened after several years, and became a secondary airport for domestic airline service, and a center for corporate and private aviation.

Panama City–Bay County International Airport(IATA: PFN, ICAO: KPFN, FAA LID: PFN) was a public airport 3 miles (4.8 km) northwest of Panama City, in Bay County, Florida. It was owned and operated by the Panama City–Bay County Airport and Industrial District. All airline services moved to the Northwest Florida Beaches International Airport on May 22, 2010, but the airfield was open to general aviation aircraft until October 1, 2010. The grounds will eventually be turned over to LUK-MB1 LLC, which plans to remove the runways and build homes, shops, walking trails and a marina.

Rick Husband Amarillo International Airport is a public airport six miles (10 km) east of downtown Amarillo, in Potter County, Texas, United States. The airport was renamed in 2003 after NASA astronaut and Amarillo native Rick Husband, who died in the Space Shuttle Columbia disaster in February of that year. 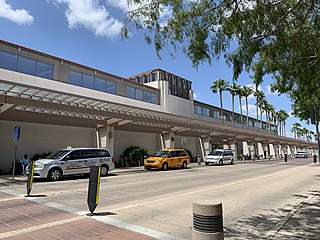 Valley International Airport (VIA) is owned by the City of Harlingen, in Cameron County, Texas, United States. It is operated by a nine-member airport board appointed by the mayor. HRL is centrally located in the Rio Grande Valley and is referred to as the "Gateway to South Padre Island" with travel amenities and door to door transportation to South Padre Island. With over 2,400 acres (970 ha) HRL is the largest airport in the RGV with room for future expansion. HRL has the longest runways in the area with modern aircraft approach systems that minimize chances of delays during bad weather.

Jack Brooks Regional Airport, formerly Southeast Texas Regional Airport, is near Port Arthur, Texas, nine miles (14 km) southeast of Beaumont and northeast of Port Arthur. It was Jefferson County Airport, but its name was changed to honor former U.S. Representative Jack Brooks. The airport is southwest of the city of Nederland in unincorporated Jefferson County, and is used for general aviation. Southwest Airlines ended scheduled jet service in 1980 and several other airlines have started and ended service as well including American Eagle, Continental, Delta/Delta Connection and United Express. The latest chapter is the resumption of service by American Eagle for American Airlines to Dallas/Ft. Worth (DFW).

Combi aircraft in commercial aviation are aircraft that can be used to carry either passengers as an airliner, or cargo as a freighter, and may have a partition in the aircraft cabin to allow both uses at the same time in a mixed passenger/freight combination. The name combi comes from the word combination. The concept previously existed in railroading, as a passenger car that contained a separate compartment for mail and/or baggage. 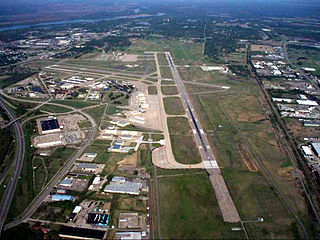 Fort Smith Regional Airport is a public use joint civil–military airport located near the Interstate 540 freeway three nautical miles (6 km) southeast of the central business district of Fort Smith, in Sebastian County, Arkansas, United States. FSM is governed by the Fort Smith Airport Commission as established by the City of Fort Smith, Arkansas. It serves the transportation needs of residents and businesses of western Arkansas and eastern Oklahoma. FSM is currently served by American Eagle, the regional airline affiliate of American Airlines. It has a large population of corporate and general aviation aircraft. A full-service fixed-base operator (FBO), TAC Air, provides service to general aviation, airline, and military operators. 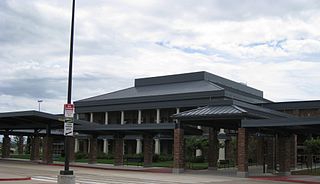 Abilene Regional Airport is a public airport 3 miles (5 km) southeast of Abilene, in Taylor County, Texas. It is within the Abilene city limits and owned and operated by the city. 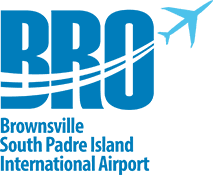 Emerald Air was an airline headquartered in Austin, Texas, United States. Founded by William Ford and Richard Martel It was formerly known as Emerald Valley Airlines. Emerald Airlines' brief history is marked by arrangements to feed connecting flights into both passenger airlines and cargo airlines much larger route systems. The airline also independently operated scheduled passenger flights within the state of Texas during the mid-1980s with Douglas DC-9-10 jet and Fairchild Hiller FH-227 turboprop aircraft and briefly served Oklahoma City, Oklahoma and later Wichita, Kansas and Omaha, Nebraska as well. 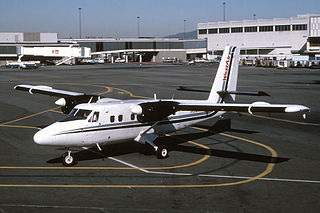 Intrastate airlines in the U.S. are defined as air carriers operating inside of one individual state and thus not flying across state lines. Larger intrastate airlines in the U.S. that operated mainline turboprop and/or jet aircraft were created as a result of former federal airline regulations, as passenger air carriers that only flew intrastate service were not regulated by the federal government but were instead primarily regulated by the respective state governments in their home states. For example, Pacific Southwest Airlines (PSA) and Air California were both regulated by the California Public Utilities Commission (CPUC) prior to the federal Airline Deregulation Act of 1978. Although intrastate airlines in some states used only turboprop aircraft, scheduled passenger service on jet aircraft was operated by intrastate air carriers in California, Florida, Hawaii and Texas.