Dale was born in London and educated at Spring Hill College, Birmingham, for the Congregational ministry. In 1853 he was invited to Carr's Lane Chapel, Birmingham, as co-pastor with John Angell James, on whose death in 1859 he became sole pastor for the rest of his life. In the University of London M.A. examination (1853), he came first in philosophy and won the gold medal. The degree of LL.D. was conferred upon him in 1883 by the University of Glasgow during the lord rectorship of John Bright. Yale University gave him its D.D. degree, although he never used it. He served as Chairman of the Congregational Union of England and Wales in 1868 and President of the International Congregational Council in 1891. [1]

Dale normally read his sermons, because "if I spoke extemporaneously I should never sit down again". [2] He did not use the title "Reverend". He was a strong advocate of the disestablishment of the Church of England, holding that the Christian church was essentially a spiritual brotherhood, and that any vestige of political authority impaired its spiritual work. In church government he believed strongly that congregationalism was the most fitting environment for Christianity. He published lectures on such topics as The Atonement (1875, and frequently reprinted), sermons, and the Manual of Congregational Principles (1884); and, at his death, he left an unfinished history of Congregationalism, [1] revised by his son, A. W. W. Dale.

The "Civic Gospel" and politics

Dale's integrity, intelligence, moral passion and oratory soon made him a national figure in an age when the strength of non-conformity was at its highest. [3] He welcomed social improvement and was an advocate, with George Dawson, of what became known in Birmingham as the Civic Gospel. [4] The health, housing, sanitation and living conditions in Birmingham had suffered from its rapid population expansion in the previous thirty years. [5] Dale argued "the public duty of the state is the private duty of every citizen": service on the town council to improve the wellbeing of Birmingham was advocated by Dale as having moral and religious worth. [6] He was an advocate of free public education, social improvement, the extension of the franchise, the recognition of trades unions, and understanding the links between poverty and crime.

Although Dale did not preach politics, he was a keen Liberal and worked with other Birmingham reformers and radicals including Joseph Chamberlain, William Kenrick, Jesse Collings, George Dixon, John Bright, John Henry Chamberlain, William Harris, and Samuel Timmins. He played a major part in opposing the religious elements of the Forster Education Act of 1870 (see below).

He was a member of the Arts Club, which existed from 1873 to 1880 for the purpose "of facilitating the daily social intercourse of gentlemen professing Liberal opinions, who are engaged or interested in the public life of Birmingham": it was described in a local newspaper as "the real seat of government, where all measures are framed for the ordering of our municipal, social, charitable, and political institutions". [7] [8] [9]

When Joseph Chamberlain resigned from the Liberal government in 1886 over William Gladstone's proposals for Irish Home Rule, Dale supported him. This point marked a significant split in the Liberal party, but did not reduce Dale's influence.

When Forster's Elementary Education Bill appeared, Dale attacked it. He argued that the resulting schools would often be purely denominational institutions and the Bill's "conscience clause" gave inadequate protection to Nonconformists. Dale criticised the way school boards would be empowered to make grants out of the rates to maintain sectarian schools. He was himself in favour of secular education, claiming that it was the only logical solution and was consistent with Nonconformist principles. In Birmingham this controversy was ended in 1879 by a compromise.

His interest in educational affairs had led him to accept a seat on the Birmingham school board. He was appointed a governor of Foundation of the Schools of King Edward VI in Birmingham and served on the Royal Commission of Education. Dale took a great interest in Spring Hill Congregational College, Moseley (where he had previously studied). Largely due to his initiative, Spring Hill College, renamed Mansfield College after its founders, was moved to Oxford in 1886 and he became chairman of the council of what is now Mansfield College, Oxford.

The 1886 split within the Liberal Party over Irish Home Rule marked the disintegration of what had been a close-knit circle of like-minded reformers. In 1892, looking back to the 1870s, Dale wrote: [10]

Birmingham is still a remarkable place, … but it seems to me that the interesting people are gone. … There was Dawson, … [Charles] Vince, John Henry Chamberlain and Harris, and Joseph Chamberlain in his fresh and brilliant promise. Dawson, Vince, and John Henry Chamberlain are dead; Harris remains, and is as kindly and epigrammatic as ever; but in the break-up of the Liberal Party he remained with Gladstone and I seldom see him.
Joseph Chamberlain is, of course, still immensely interesting; but I am not sure that he is as interesting as he was twenty years ago, and he is necessarily much away from Birmingham. The time was when I used to have a smoke with him, and J. H. Chamberlain, and Timmins, and the rest, as often as two or three times a week. The split of the Liberal Party has made an immense difference to my private life. There are two clubs and I belong to neither; I have friends on both sides, but the discussions that we had at the old Arts Club before the quarrel I look back upon with lasting regret.

Dale died on 13 March 1895 and was buried in Key Hill Cemetery, Hockley.

A statue of Dale sculpted by Edward Onslow Ford in 1898 was rediscovered in 1995, and is now on loan from Birmingham Museum & Art Gallery to Carr's Lane Church Centre (his old church). [11] The National Portrait Gallery holds a carte de visite photograph and a wood engraving of him. [12]

Joseph Chamberlain was a British statesman who was first a radical Liberal, then, after opposing home rule for Ireland, a Liberal Unionist, and eventually served as a leading imperialist in coalition with the Conservatives. He split both major British parties in the course of his career. He was father, by different marriages, of Nobel Peace Prize winner Austen Chamberlain and of Prime Minister Neville Chamberlain. 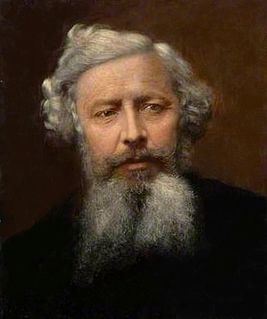 George Dawson was an English nonconformist preacher, lecturer and activist. He was an influential voice in the calls for radical political and social reform in Birmingham, a philosophy that became known as the Civic Gospel. 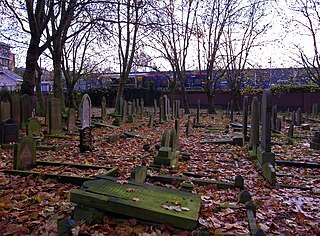 Key Hill Cemetery,, originally called Birmingham General Cemetery, is a cemetery in Hockley, Birmingham, England. It opened in 1836 as a nondenominational cemetery, and is the oldest cemetery, not being in a churchyard, in Birmingham. The principal entrance is on Icknield Street to the west, with a secondary entrance on Key Hill to the north. The cemetery contains the graves of many prominent members of Birmingham society in the late 19th century, to the extent that in 1915 E. H. Manning felt able to dub it "the Westminster Abbey of the Midlands". 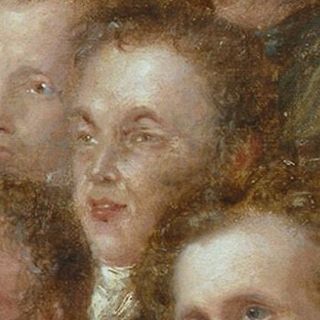 Henry Richard was a Congregational minister and Welsh Member of Parliament between 1868–1888. Richard was an advocate of peace and international arbitration, as secretary of the Peace Society for forty years (1848–1884). His other interests included anti-slavery work.

The Birmingham board schools were set up very rapidly after the Forster Elementary Education Act 1870 was enacted, covering England and Wales. Over forty were created in Birmingham.

The National Education League was a political movement in England and Wales which promoted elementary education for all children, free from religious control. 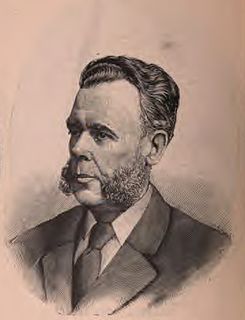 John Campbell (1795–1867) was a Scottish Congregationalist minister at the Moorfields Tabernacle in London. He was the second successor there of George Whitefield the Calvinistic Methodist. He founded and edited religious magazines and journals, including the Christian Witness and the British Banner.

The City Temple is a Nonconformist church on Holborn Viaduct in London. The current minister is Rodney Woods. The church is part of the Thames North Synod of the United Reformed Church and is a member of the Evangelical Alliance. 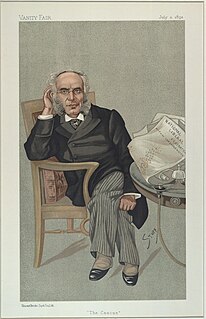 Francis Schnadhorst was a Birmingham draper and English Liberal Party politician. He briefly held elected office on Birmingham Council, and was offered the chance to stand for Parliament in winnable seats, but he found his true metier was in political organisation and administration both in his home town as secretary of the highly successful Birmingham Liberal Association from 1867 to 1884, and nationally as secretary of the newly formed National Liberal Federation from 1877 to 1893. He was famously described as "the spectacled, sallow, sombre" Birmingham draper who within a short period of time was to establish himself through the Birmingham Liberal caucus as one of the most brilliant organisers in the country.

The Civic Gospel was a philosophy of municipal activism and improvement that emerged in Birmingham, England, in the mid-19th century. Tracing its origins to the teaching of independent nonconformist preacher George Dawson, who declared that "a town is a solemn organism through which shall flow, and in which shall be shaped, all the highest, loftiest and truest ends of man's moral nature", it reached its culmination in the mayoralty of Joseph Chamberlain between 1873 and 1876. After Dawson's death in 1876 it was the Congregationalist pastor R. W. Dale who took on the role as the movement's leading nonconformist spokesman. Other major proponents included the Baptist Charles Vince and the Unitarian H. W. Crosskey.

The Church of the Saviour in Edward Street, Birmingham, was a liberal Unitarian church founded in 1845 for the liberal nonconformist preacher, George Dawson. It became the centre of the programme of social and municipal improvement known as the Civic Gospel, and was instrumental in launching Joseph Chamberlain's political career.

Carrs Lane Church, also known as The Church at Carrs Lane is a church in Birmingham and is noted as having the largest free-standing cross in the country. 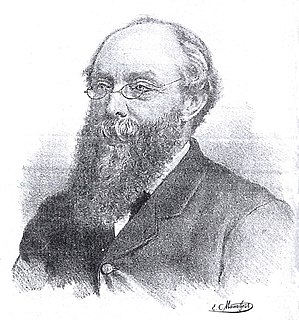 William Harris was a Liberal politician and strategist in Birmingham, England, in an era of dramatic municipal reform. On his death, he was described by one obituary-writer as "one of the founders of modern Birmingham". J. L. Garvin called him "the Abbé Sieyès of Birmingham" ; and Asa Briggs "a most active and intelligent wire-puller behind the scenes". He was dubbed the "father of the Caucus", the highly organised and controversial Liberal party machine that had its origins in Birmingham, but was afterwards introduced at national level to the National Liberal Federation. He served as the first Chairman of the National Liberal Federation from 1877 to 1882. By profession he was an architect and surveyor; and he was also a prolific journalist and author.