Hernández Ramirez received a bachelor's degree in business administration from the Ibero-American University (1964), co-founded Acciones y Valores de México (Accival) in 1971, later in 1974 he became the youngest president ever of the Mexican stock exchange. [1] IN 1989 he became the president of FICSAC, an organization created to raise funds to build a new Universidad Iberamericana. Later in '91 he and Alfredo Harp Helu acquired Banamex, and formed the Grupo Financiero Banamex-Accival and was part of the Board of Directors. A year later Roberto founded Fomento Social Banamex of which he became co-president. In 1993 he became president of FUNED ( fundacion Mexicana para la educacion, la tecnologia y la ciencia). Four years later in 1997 Hernandez became the Director of Banamex. The following year he headed the MUNAL 2000 to create a national art museum, as well as assuming the presidency of the Pro-Universidad Veracruzana patronage. In 2000 he formed the Fomento Ecologico Banamex of which he became co-president. In 2001 a major transaction takes place between the US and Mexico when Banamex-Accival is sold to Citigroup, after this he became a member of the Board of Directors. In '02 he became a member of the International Advisory Committee of the Federal Reserve Bank of New York. During that year he also founded two foundations; Pedro y Elena Hernandez, A.C. and Fundacion Haciendas del Mundo Maya, A.C. [2] The following year he became the Vice Chair of The Nature Conservancy (TNC). [3] In 2005 he was awarded the Sorolla Medal by the Hispanic Society in New York for his contribution and promotion of the arts in Mexico. A year later he assumed the presidency of the patronage of the Hospital Infantil de Mexico "Federico Gomez". [4] Few events are more emblematic of the fusion of high-level government officials, corporate finance, and drug trafficking than a meeting in Mérida between then-President George W. Bush and Calderón in March 2007. The meeting hatched the initial plans of the Mérida Initiative, or Plan Mexico, which has made Mexico the number one recipient of U.S. military aid in Latin America, surpassing Colombia. Narco News reported the Mérida summit was being hosted at the property of accused narcotrafficker and money launderer Roberto Hernández Ramírez. The narco-estate had also been the site of a 1999 anti-drug summit between President Bill Clinton and his Mexican counterpart Ernesto Zedillo.At the time of the 1999 meeting, Hernández was the owner of Mexico's national bank, Banamex. By the time of the following presidential summit in 2007, Hernández had become a board member of Citigroup, which had bought Banamex. (Mexican daily Por Esto! and Narco News broke the story about the narco-banker and defeated Citigroup's libel and slander suit against their reporters; for a full account, see The Narco News Bulletin.)https://nacla.org/news/mexico%E2%80%99s-emerging-narco-state

Grupo Financiero Banorte, S.A.B. de C.V., doing business as Banorte and as Ixe, is a Mexican banking and financial services holding company with headquarters in Monterrey and Mexico City. It is one of the four largest commercial banks of Mexico by assets and loans, and the largest retirement fund administrator.

The Ibero-American University is one of the most prestigious universities in Mexico and in Latin America. The private institution of higher education is sponsored by the Society of Jesus, and it is recognized as having an international-grade level of excellence. In 2009, the UIA received the SEP-ANUIES Prize as the best private university in Mexico. The Ibero's flagship campus is located in the Santa Fe district of Mexico City. 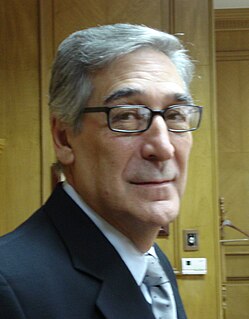 Everardo Elizondo Almaguer is a Mexican economist who has worked for private, public, and academic institutions. By senatorial appointment, he served as deputy governor of the Bank of Mexico —the country's central bank— from 1998 to 2008.

Son of Ruben Aguilar Monteverde (1924-2011) and Rosa Alicia García Valenzuela (1923-2016). His father was Headmaster of the Banco Nacional de México (Banamex), institution in which he worked for 43 years. He took part in the creation of a dozen civil society organizations, including Centro Mexicano para la Filantropía (CEMEFI), FUNSALUD and Managing Director of the Instituto Nacional de Nutrición Dr. Salvador Zubirán. He advised companies such as Grupo Carso, Grupo Alfa and Cinépolis.

Grupo Financiero Banamex S.A. de C.V. has its origins and is the owner of the Banco Nacional de México or Citibanamex. It is the second largest bank in Mexico. The Banamex Financial Group was purchased by Citigroup in August 2001 for $12.5 billion USD. It continues to operate as a Citigroup subsidiary.

Grupo Elektra is a Mexican financial and retailing corporation established by Hugo Salinas Rocha. The company has operations in Latin America and is the largest non-bank provider of cash advance services in the United States.

Chedraui is a publicly traded Mexican grocery store and department store chain which also operates stores in California, Arizona, and Nevada under the name El Super. It is traded on the Mexican Stock Exchange under the symbol CHEDRAUI.

Alonso García-Tamés is the former CEO of the National Bank of Public Works and Services (Banobras) and General Director of Operations of the Central Bank of Mexico.

Germán Larrea Mota-Velasco is a Mexican billionaire businessman. He is the CEO of Grupo México, Mexico's largest mining corporation, and the third largest copper producer in the world.

Ángela Gurría Davó is a Mexican sculptor. In 1974, she became the first female member of the Academia de Artes. She is best known for her monumental sculptures such as Señal, an eighteen meter tall work created for the 1968 Summer Olympics. She lives and works in Mexico City.

Banesco Banco Universal C.A. is a Venezuelan financial institution whose principal branch is located in Caracas. The bank is part of the Asociación Bancaria de Venezuela.

Manuel Sánchez is a Mexican economist with a wide-ranging professional career that includes positions in academics, banking, and central banking. He was nominated by President Felipe Calderón Hinojosa on April 23, 2009, as Deputy Governor and member of the Board of Governors at Banco de México, Mexico's central bank, for a term that ends on December 31, 2016. His appointment was ratified by the Standing Commission of the Mexican Congress on May 27, 2009.

Mario Orozco Rivera was a Mexican muralist and painter, a later proponent of Mexican muralism, and whose work was particularly influenced by David Alfaro Siqueiros. He created a number of murals, mostly in the state of Veracruz before becoming an assistant to Siqueiros, directing the Taller Siqueiros in Cuernavaca and working with the artists on projects such as the Polyforum Cultural Siqueiros. While preferring mural work, which he considered less commercial, Orozco Rivera also created oils and sculptures. Many of these works were exhibited in Mexico and abroad and can be found in many major collections. His work received recognition in various countries.

Beatriz Zamora is a Mexican artist who is best known for her monochrome works in black. Although she has struggled commercially, her work has been recognized at various points in her career such as with membership in the Legion of Honor of the Académie des Beaux-Arts in France and the Sistema Nacional de Creadores de Arte in Mexico.