Rodeløkka is a neighborhood in Grünerløkka in Oslo, Norway.

The property was bought by the dean Frederik Rode in 1854. The last element is the finite form of løkke f 'paddock'. 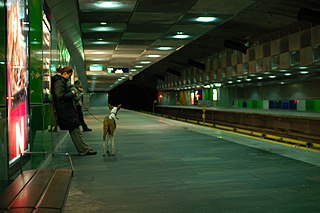 Carl Berners plass is an underground rapid transit station located on the Grorud Line of the Oslo Metro, and a tram stop on the Sinsen Line of the Oslo Tramway. The square also has a bus stop for lines 20, 21, 31 and 33. Located at Helsfyr in Oslo, Norway, the area has a mixture of apartment buildings and small businesses. The station is the first metro station on the Grorud Line after it branches off from the shared Common Tunnel. North of the station, the Ring Line branches off from the Grorud Line. The station is served by line 5 of the metro and Line 17 of the tramway, with four hourly departures during regular hours. The tram operates every 10 minutes during regular hours.

The National Theatre in Oslo is one of Norway's largest and most prominent venues for performance of dramatic arts.

The National Library of Norway was established in 1989. Its principal task is "to preserve the past for the future". The library is located both in Oslo and in Mo i Rana. The building in Oslo was restored and reopened in 2005.

Valkyrie plass was a metro station and a tram station on the Oslo Metro and the Oslo Tramway.

AS Oslo Sporveier is a defunct municipal owned company responsible for public transport in Oslo, Norway. It was created in 1924 to take over the city's two private tram companies. In 1927 its started with bus transport, including from 1940 to 1968 trolleybuses. Since 1966 rapid transit and from 1985 water buses have also been operated by the company. It was split into two separate companies in 2006; Kollektivtransportproduksjon took over the operation while Oslo Public Transport Administration was responsible for buying the services, fare regulation and marketing. The latter merged into Ruter in 2008, when the Oslo Sporveier brand was discontinued.

The Sagene Line is an abandoned line of the Oslo Tramway in Norway. It ran from Stortorvet in the city center along Akersgata and Ullevålsveien through the neighborhood of St. Hanshaugen. It then continued along Colletts gate, Geitmyrsveien and Kierschouws gate to Sagene. At Sagene Church it had a regulation stop and access to Sagene Depot. The line continued along Bentsebrugata to Torshov, where it intersected with the Grünerløkka–Torshov Line.

A/S Kristiania Sporveisselskab or KSS, nicknamed the Green Tramway, was an operator of part of the Oslo Tramway from 1875 to 1924. The company was established in 1874 and started with horsecar operations on the Ullevål Hageby Line, Gamlebyen Line and the Grünerløkka–Torshov Line. The network was electrified with in 1899 and 1900, whereby the company was bought by Union-Elektricitäts-Gesellschaft. It delivered new Class U trams. Within a few years the company had also opened the Vålerenga Line and Kampen Line. It took over Kristiania Kommunale Sporveie in 1905, taking over its fleet of Class S trams and the Sagene Ring, the Vippetangen Line and the Rodeløkka Line. 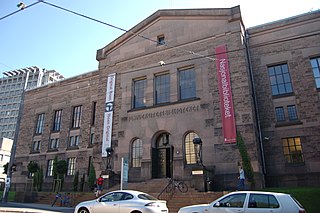 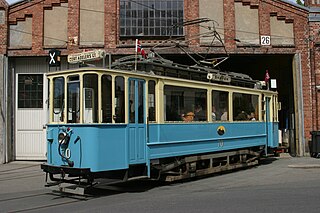 Oslo Tramway Museum (Norwegian: Sporveismuseet is a railway museum located at Majorstuen in Oslo, Norway. It is dedicated to the preservation of the Oslo Tramway, Oslo T-bane, Oslo trolleybus and buses used in Oslo. The museum is run by the non-profit organization Lokaltrafikkhistorisk Forening with 645 members. The museum also operates a heritage tramway in Vinterbro outside Oslo.

The Sinsen Line is part of the Oslo Tramway on the east side of the city. Most of the line is served by line 17, although the northernmost tip (Grefsen–Torshov) is served by line 18 which otherwise runs on the Grünerløkka–Torshov Line. Both services use SL95 articulated trams.

The history of the Oslo Tramway and Oslo Metro in Oslo, Norway, starts in 1875, when Kristiania Sporveisselskab (KSS) opened two horsecar lines through the city centre. In 1894, Kristiania Elektriske Sporvei (KES) built the first electric street tramways, which ran west from the city centre. Within six years, all tramways were electric. The city council established Kristiania Kommunale Sporveie (KKS) in 1899, which built three lines before it was sold to KSS six years later. Both KSS and KES were taken over by the municipality in 1924, becoming Oslo Sporveier. The company gradually expanded the city tram network, which reached its peak length in 1939.

The Rodeløkka Line is a former line of the Oslo Tramway of Norway. It was in use from 1900 to 1961, serving the neighborhood of Rodeløkka. After closing, the southern part of the line was designated as part of the Sinsen Line. The Rodeløkka Line was built by Kristiania Kommunale Sporveie (KKS) in 1900, and was subsequently taken over by Kristiania Sporveisselskab (KSS) in 1905. In 1924, the ownership was transferred to Oslo Sporveier. It was served by Line 9 until 1949, when it was replaced by a bus service. In 1955, a new route from Carl Berners plass to Rodeløkka was built, and the line was served by Line 13 until 1961, when the service was terminated. The tracks were removed between 1962 and 1964.

The German School of Oslo is a German-language school in Oslo, Norway and is led by Oliver Schaefer. It is located in Sporveisgata 20 at Bislett, and was opened in 1980. In the beginning, the school was located in the basement of the German Protestant Community of Oslo in Eilert Sundts gate 37, before it moved to Majorstuen School. In 1998, the DSO moved from Majorstuen to the disused Hegdehaugen Upper Secondary School, where it has been ever since.

The Norwegian railway network consists of 2,552 kilometers (1,586 mi) of electrified railway lines, constituting 62% of the Norwegian National Rail Administration's 4,114 kilometers (2,556 mi) of line. In 2008, electric traction accounted for 90% of the passenger kilometers, 93% of the tonne kilometers and 74% of the energy consumption of all trains running in Norway, with the rest being accounted for by diesel traction.

The Korsvoll Line is an abandoned line of the Oslo Tramway in Norway. The line branched off from the Sagene Line at Bentsebrugata and ran along Bergensgata to Lisa Kristoffersens plass in Korsvoll, Oslo. The line opened on 1 May 1924 and was operated by Oslo Sporveier. From 1927 it became part of Line 10, which it remained part of until its closing on 17 January 1949. The reason for closing the line was that it was amongst the least trafficked lines of the tramway and Oslo Sporveier wanted to convert it to a trolleybus line.