Rodong Sinmun (IPA:  [ɾo.doŋ ɕin.mun] ; Korean : 로동신문; lit. Workers' Newspaper) is a North Korean newspaper that serves as the official newspaper of the Central Committee of the Workers' Party of Korea. It was first published on November 1, 1945, as Chǒngro (Korean : 정로; Hanja : 正路; "right path"), serving as a communication channel for the North Korea Bureau of the Communist Party of Korea  [ ko ]. It was renamed in September 1946 to its current name upon the steady development of the Workers' Party of Korea. Quoted frequently by the Korean Central News Agency (KCNA) and international media, it is regarded as a source of official North Korean viewpoints on many issues.

The English-language version of Rodong Sinmun was launched in January 2012. [2]

Rodong Sinmun is published every day of the year and usually contains six pages. [5] The newspaper has approximately 100 reporters.[ citation needed ]

Following the purge and execution of Jang Song-thaek, Rodong Sinmun deleted some 20,000 articles from its web archives, [6] while others were edited to omit his name. [7]

Rodong Sinmun content can be accessed over the Mirae public WiFi network in North Korea. [8]

Since 1996, Rodong Sinmun, the Korean Central News Agency, Minju Choson , and Joson Inmingun has published a joint New Year editorial that outlines the country's policies for the year. [9] [10] The editorials usually offer praise for the Songun policy, the government and leadership, and encourage the growth of the nation. They are also critical of the policies of South Korea, Japan, the United States and Western governments towards North Korea. [11] [12] On January 1, 2006, the agency sent out a joint-editorial from North Korea's state newspapers calling for the withdrawal of American forces from South Korea. [9] While annual January 1 editorials are a tradition among the papers, that year's brought attention from Western media outlets, by calling for a "nationwide campaign for driving out the U.S. troops". [13] The editorial made several references to Korean reunification. The 2009 editorial received similar attention, as criticism of United States policy was absent, and the admission of severe economic problems in North Korea. The editorial also made reference to denuclearisation on the Korean Peninsula, in what analysts claimed was a "hopeful" sign. [14] [15] This was echoed again in its 2010 editorial, which called for an end to hostilities with the United States and a nuclear free Korean Peninsula. [16]

The 2011 joint editorial edition, [10] aside from its calls for a denuclearized Korea and for a slowdown of tensions between the two Koreas, has for the first time, mentioned the rising light industries of North Korea, given as a reason for an upcoming upsurge in the national economy in the new year and for the achievement of the Kangsong Taeguk national mission.

The 2012 joint editorial edition, the first under Kim Jong-un's leadership, started with a great tribute to Kim Jong-il and aside from recurring calls for improving inter-Korean relations and for the fulfillment of the October 4 Declaration of 2007, also called on the whole nation to give priority to do Kim Jong-il's 2012 mission of Strong and Prosperous Nation, continue his and his father Kim Il-sung's legacies to the entire country and the socialist cause, and to build up and encourage the various sectors that compose the nation to become contributors to national progress in all areas at all costs.[ citation needed ]

This practice ended in 2013 when Kim Jong-un delivered the first New Year speech on television in 19 years. [17]

In June 2018, Rodong Sinmun devoted a four-page feature to the North Korea–United States summit, welcoming its results. The article carried the text of the declaration in full. In addition, it mentioned security guarantees and Donald Trump's pledge to cease the joint military exercises with South Korea. It failed to mention the promise Kim had allegedly made to Trump about closing down a test site for missile engines, however. [18]

The Down-with-Imperialism Union, or DIU, was founded on 17 October 1926 in Huadian city, Jilin province, China, in order to fight against Japanese imperialism and to promote Marxism–Leninism. It is considered to be the root and foundation of the Workers' Party of Korea and its creation is celebrated every year.

The mass media in North Korea is amongst the most strictly controlled in the world. The constitution nominally provides for freedom of speech and the press. However, the government prohibits the exercise of these rights in coming in and out of the country but seeks to mold information at its source. A typical example of this was the death of Kim Jong-il, news of which was not divulged until two days after it occurred. Kim Jong-un, who replaced his father as the leader, has given every indication he will largely follow in his father's footsteps. However, new technologies are being made more freely available in the country. State-run media outlets are setting up websites, while mobile phone ownership in the country has escalated rapidly. “There is no country which monopolizes and controls successfully the internet and information as North Korea does,” said Kang Shin-sam, an expert on North Korean technology and co-head of the International Solidarity for Freedom of Information in North Korea, a nonprofit based in South Korea. North Korea now has about four million mobile-phone subscribers—roughly one-sixth of the population and four times the number in 2012, according to an estimate by Kim Yon-ho, a senior researcher at Johns Hopkins University’s School of Advanced International Studies.

The Socialist Patriotic Youth League is a North Korean youth organization. It is the main youth organization in North Korea. Directly under the party Central Committee, it is the only mass organization expressly mentioned in the charter of the Workers' Party of Korea. Youth under 15 may join the Young Pioneer Corps, itself a part of the larger Korean Children's Union. The organization, modeled after the Komsomol in the former Soviet Union, includes all North Koreans without party membership between the ages of 15 and 30, although married women who opt to become housewives are transferred to the Socialist Women's Union. 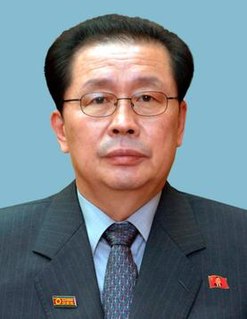 Kim Kyong-hui is the aunt of current North Korean leader, Kim Jong-un. She is the daughter of the founding North Korean leader Kim Il-sung and the sister of the late leader Kim Jong-il. She currently serves as Secretary for Organization of the Workers' Party of Korea. An important member of Kim Jong-il's inner circle of trusted friends and advisors, she was director of the WPK Light Industry Department from 1988 to 2012. She was married to Jang Sung-taek, who was executed in December 2013 in Pyongyang, after being charged with treason and corruption.

Minju Choson is a state-run North Korean government newspaper. It is published in Pyongyang. It was started in 1945. It is the principal newspaper of the Cabinet of North Korea and the Presidium of the Supreme People's Assembly. 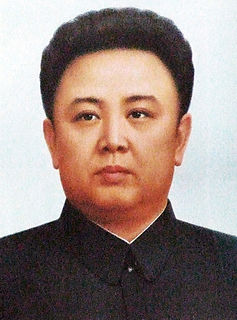 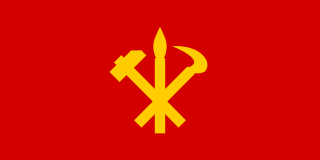 "We Will Go to Mount Paektu" is a 2015 North Korean light music song in praise of the country's leader, Kim Jong-un. 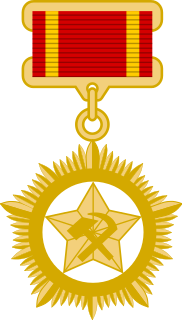 Hero of Labor is the highest title of honor of North Korea and the highest decoration of the country overall. The award was probably scheduled for establishment in the summer of 1950, but the Korean War postponed these plans. When the war had entered a phase of stalemate along the 38th parallel, the government had time to officially launch the decoration, originally under the name Korea Hero of Labor. 16 people were decorated Labor Heroes during the war and more since then. The decoration is based on its Soviet equivalent, Hero of Socialist Labour.

Chongnyon Jonwi is a daily newspaper in North Korea. It is the official organ of the Central Committee of the Socialist Patriotic Youth League. It is one of the three most important newspapers in the country, the other two being Rodong Sinmun and Joson Inmingun. Chongnyon Jonwi is particularly known for jointly publishing New Year editorials with the two papers under the rule of Kim Jong-il. The editor-in-chief is Choe Sun-chol.

There have been no confirmed cases of COVID-19 in North Korea. In January 2020, the North Korean government began taking extensive measures to block the outbreak, including quarantine facilities, and strict travel restrictions. In March and April 2020, the Asia Times and 38 North reported that these measures seemed largely successful.