In 1993, as Santoro was studying Journalism at PUC-Rio, he entered the Actor's Workshop of Rede Globo. Santoro went on to play parts in many of Globo's telenovelas, such as Olho no Olho (1993), Pátria Minha (1994), Explode Coração (1995), O Amor Está no Ar (1997), Suave Veneno (1999) and Mulheres Apaixonadas (2003), as well as the miniseries Hilda Furacão (1998), in the role of a priest. Santoro was also the voice actor of the titular character in Stuart Little and its sequel in the Brazilian dubbed copies.

His first major role in a cinema production came in 2001, with Bicho de Sete Cabeças (Brainstorm) by Brazilian director Laís Bodansky. By the end of the film, he received a standing ovation from the audience. [8] [9] He also went on to win the festival's best actor trophy. After Bicho, his reputation as an actor had been solidified and he was cast as the male lead in Abril Despedaçado (Behind the Sun), one of the nominees for best foreign film in the 2002 Golden Globe Awards. In the 2003 Hector Babenco film Carandiru he played Lady Di, a transsexual prisoner.

Canadian director Robert Allan Ackerman signed Santoro for his TV production The Roman Spring of Mrs. Stone after being mesmerised by his performance in Bicho de Sete Cabeças. Since Santoro did not have an agent in North America, Ackerman contacted Santoro's father. He spent two months filming in Rome, alongside renowned actors such as Helen Mirren and Anne Bancroft. Soon after he finished shooting for Mrs. Stone, he received an offer from Columbia Pictures for a part in the blockbuster Charlie's Angels: Full Throttle . His performance in Charlie's Angels kick-started his career in Hollywood. After Charlie's Angels, he played the character of Karl, the enigmatic chief designer and love interest of Laura Linney's character, in the romantic comedy Love Actually , which also features Colin Firth, Lucia Moniz, Hugh Grant, Emma Thompson, Keira Knightley, and Rowan Atkinson.

He also started getting work in the advertising business as he appeared in a commercial campaign with Gisele Bündchen in 2002. He played the male lead in No. 5 The Film , the 3-minute-long commercial for Chanel, directed by Baz Luhrmann alongside Nicole Kidman in 2004.

In 2006, Santoro joined the cast of Lost as survivor of Oceanic Flight 815, Paulo. His first appearance was in episode titled, "Further Instructions". His character was killed off in the episode "Exposé". He also voices his character Paulo in the Portuguese dub for Brazil.

Santoro was cast as Persian emperor Xerxes in the film 300 , based on the Frank Miller comic of the same name, in 2006. The role had many special requirements, such as intensive workout for the physicality of the role (Santoro had lost 24 pounds to work in a Brazilian miniseries), extensive CG work to portray the 6'2" Santoro as the 7-foot God-King, a four-and-a-half-hour makeup application process and the complete removal of Santoro's body hair first by waxing and then by shaving when that proved too painful. [10] His eyebrows were kept intact, however, covered over with prosthetics and drawn in rather than being shaved. [11] Santoro read the works of Herodotus, an Ancient Greek historian, in order to prepare for his part. Regarding Xerxes, he has stated:

He's rich, he's arrogant, he's a very unstable megalomaniac. He just wants to conquer the world. His ambition is unlimited. He wants glory; he wants victory; he wants eternal fame. Underneath all that wanting, though, he's ultimately weak and very insecure. [10]

For his role on 300, Santoro became the first Brazilian actor nominated to the MTV Movie Awards in the category of Best Villain. He did not win however, and the award went to Jack Nicholson for The Departed .

He played the late footballer Heleno de Freitas in the 2012 film Heleno. [12] Santoro co-starred alongside Arnold Schwarzenegger in the 2013 film The Last Stand . Santoro played Garriga in the Will Smith drama film Focus (2015).

Santoro played Jesus in the 2016 historical action film Ben-Hur and received personal blessings from Pope Francis for this role. [13]

Santoro has been in a relationship with Brazilian actress Mel Fronckowiak since 2013. On 22 May 2017, they welcomed their first child, a daughter named Nina. [14]

Other nominations and honors

Behind the Sun is a 2001 Brazilian-French-Swiss social drama film directed by Walter Salles, produced by Arthur Cohn, and starring Rodrigo Santoro. Its original Portuguese title means Shattered April, and it is based on the 1978 novel Broken April written by the Albanian writer Ismail Kadare, about the honor culture in the North of Albania.

Narbal Fontes is a popular Brazilian writer. He wrote his books together with his wife, who is called Ofélia Fontes. He was born in Tietê, São Paulo, on August 21, 1902 and died in Rio de Janeiro city, state of Rio de Janeiro, on April 29, 1960. 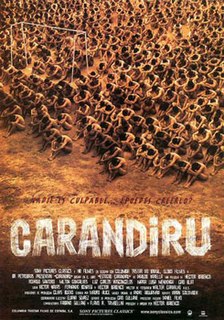 Carandiru is a 2003 Brazilian drama film directed by Héctor Babenco. It is based on the book Estação Carandiru by Dr. Drauzio Varella, a physician and AIDS specialist, who is portrayed in the film by Luiz Carlos Vasconcelos.

Brainstorm is a 2000 drama film directed by Laís Bodanzky based on the autobiographical book Canto dos Malditos by Austregésilo Carrano Bueno. The film was made through a partnership between Brazilian and Italian studios and starred Rodrigo Santoro, Othon Bastos and Cassia Kiss. The film tells the story of Neto, a young man who is admitted to a psychiatric hospital after his father discovers he is a user of marijuana. There, Neto is subjected to abuse. In addition to abuse by psychiatric hospitals, the film deals with the issues of drugs and relationships between fathers and sons. 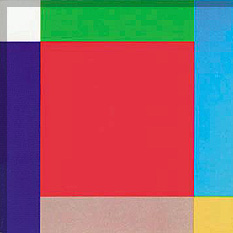 Titanomaquia (Titanomachy) is the seventh album released by Brazilian rock band Titãs, released in 10 July 1993. All songs are credited to the band as a whole, as it happened in the previous album, Tudo Ao Mesmo Tempo Agora. Also, it marks the first time Jack Endino worked with them, the only foreign one they ever worked with. 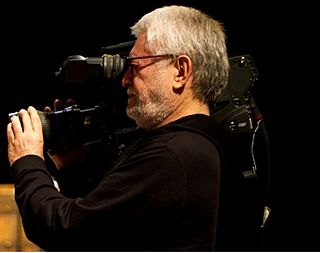 Walter Carvalho is a critically and internationally acclaimed Brazilian cinematographer. 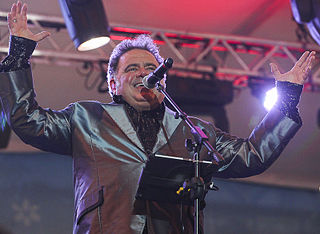 Leonardo "Léo" Jaime is a Brazilian singer-songwriter, guitarist, actor and writer, famous for being one of the founding members of the rockabilly band João Penca e Seus Miquinhos Amestrados.

Sergio Passarella Marone is a Brazilian actor. He has appeared in numerous soap operas and recently posed for the Brazilian website "Paparazzo".

Heleno de Freitas was a Brazilian footballer, who played as a forward. 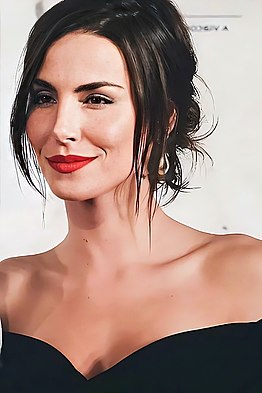 Melanie "Mel" Nunes Fronckowiak is a Brazilian actress, writer, and TV host. Fronckowiak became known after starring in several advertising and TV commercials while working as a model in Sao Paulo, at the Ford Models agency, which led her to participate in the Brazilian youth soap opera Rebeldes, playing the character of Carla. In 2013, Fronckowiak launched herself as a writer. In her first book, Inclassíficavel: Memórias da Estrada, she tells the experiences she lived traveling around forty Brazilian cities with the band Rebeldes. 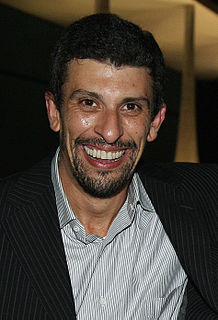 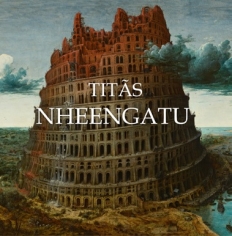 Nheengatu is the fourteenth studio album by Brazilian rock band Titãs, released on May 12, 2014. It is their first studio album with session drummer Mario Fabre, who replaced Charles Gavin, their last with vocalist and guitarist Paulo Miklos, who left the then quartet in 2016, and also their first release through Som Livre and producer Rafael Ramos. The album was dedicated to Rachel Salém, Miklos' wife who died on July 23, 2013 of lung cancer.

The Grande Prêmio do Cinema Brasileiro, more popularly known as Grande Otelo, is a Brazilian film award. It was established in 2000 as Grande Prêmio Cinema Brasil by the Ministry of Culture of Brazil that presented it in 2000 and 2001. In 2002, the newly established Academia Brasileira de Cinema taken on the role of delivering the award which was renamed to Grande Prêmio do Cinema Brasileiro. Sponsored by BR Distribuidora the 2002 edition had a "BR" on its name; in 2003, however, there was no sponsor. In 2004, it gained "TAM" on its name since TAM Airlines became the award sponsor. From 2008 to 2009 its sponsorship was provided by Vivo. From 2010 onward it has no company sponsoring it.

Alessandra Vidal de Negreiros Negrini is a Brazilian actress. She is renowned internationally for her roles in Brazilian telenovelas and films. She began her television career after starring in Olho no Olho (1993) playing the role of Clara. In film, her first role was Lília in the Four Days in September movie. This opened up gates for her as she has starred in over a dozen telenovelas and in television series since then. In telenovelas she is known for her roles in Desejos de Mulher (2002), Paraíso Tropical (2007), Lado a Lado (2012), Boogie Oogie (2014).

The Cinemateca Brasileira is the institution responsible for preserving Brazilian audiovisual production. In July 2021 it experienced a major fire.

Heleno is a 2011 Brazilian biographical drama film directed by José Henrique Fonseca. It stars and was produced by Brazilian actor Rodrigo Santoro.

A Maldição do Sanpaku is a 1991 Brazilian film directed by José Joffily. It stars Patrícia Pillar and Felipe Camargo.