Roger Livesey (25 June 1906 – 4 February 1976) was a British stage and film actor. He is most often remembered for the three Powell & Pressburger films in which he starred: The Life and Death of Colonel Blimp , I Know Where I'm Going! and A Matter of Life and Death . Tall and broad with a mop of chestnut hair, Livesey used his highly distinctive husky voice, gentle manner and athletic physique to create many notable roles in his theatre and film work.

Livesey was born in Barry, Wales. [1] Although most articles about him indicated that his parents were Samuel Livesey and Mary Catherine (née Edwards), later research has shown that his father was actually Joseph Livesey. The confusion may have arisen because his mother Mary married Samuel (Joseph's brother) after Joseph's death and the death of Samuel's wife, Mary's sister. Samuel and Mary had a child of their own, Stella, who was both Roger's half sister and first cousin. Roger Livesey was educated at Westminster City School, London. [2] His two step-brothers (who were also his first cousins) were also actors.

Livesey studied under Italia Conti. [3] His first stage role was as the office boy in Loyalty at St. James's Theatre in 1917. He then appeared in a wide range of productions from Shakespeare to modern comedies. He played various roles in the West End from 1920 to 1926, toured the West Indies and South Africa, and then returned to join the Old Vic/Sadler's Wells company from September 1932 until May 1934. In 1936 he appeared in New York City in Wycherley's comedy The Country Wife . While in New York he married actress Ursula Jeans, whom he had known previously in England [4] (Livesey's sister Maggie was already married to Ursula Jeans' brother Desmond).

At the outbreak of the Second World War Livesey and Jeans were among the first volunteers to entertain the troops. He then applied for flying duties in the Royal Air Force but due to his age was rejected. Instead he worked in an aircraft factory at Desford aerodrome near Leicester to "do his bit for the war effort".

Livesey was chosen by Michael Powell to play the lead in The Life and Death of Colonel Blimp (1943) after Powell was denied his original choice, Laurence Olivier (Winston Churchill had objected to the movie and the Fleet Air Arm refused to release Olivier, who had been a Hollywood movie star before returning to England to take a Navy commission). [5] The movie was shown in New York and established Livesey's international reputation as a talented character actor. In 1945, he was the first choice for the male lead role in Brief Encounter , which in the end went to Trevor Howard. [6]

He toured Australia from 1956 to 1958 playing Jimmy Broadbent in The Reluctant Debutante and continued playing many theatrical roles during his film career until 1969. One of his last roles was as the Duke of St Bungay in The Pallisers television series. His final television appearance was in the series Benjamin Franklin in 1975.

Livesey died in Watford from colorectal cancer at the age of 69 on 4 February 1976. He shares a memorial plaque with his wife Ursula Jeans in the actors' church St Paul's in Covent Garden.

After Joseph died in 1911 and Margaret Ann died in 1913, Sam married Mary Catherine in 1913. [7] They then brought up the children as one large family, having another child of their own, Stella in 1915.

Many of the family formed a touring company of actors, performing in regional theatres and from the back of an old wagon, one side of which could be dropped to form a stage. Because of their touring, they did not regard themselves as particularly Welsh, or English. They were just British because people happened to be born in the places where their mothers happened to be residing at the time.

In 1958, he, Judith Furse, Terry-Thomas, Rita Webb, Avril Angers, and Miles Malleson, recorded 'Indian Summer of an Uncle', and 'Jeeves Takes Charge' for the Caedmon Audio record label, (Caedmon Audio TC-1137). It was re-released in stereo in 1964.

Adolf Anton Wilhelm Wohlbrück was an Austrian actor who settled in the United Kingdom under the name Anton Walbrook. A popular performer in Austria and pre-war Germany, he left in 1936 out of concerns for his own safety and established a career in British cinema. Walbrook is perhaps best known for his roles in the original British film of Gaslight, The Life and Death of Colonel Blimp and The Red Shoes. 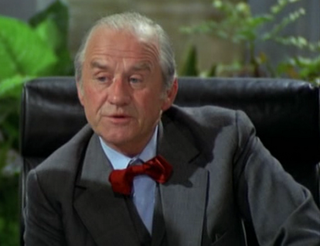 Cyril James Cusack was an Irish stage and screen actor with a career that spanned more than 70 years. During his lifetime, he was considered one of Ireland’s finest thespians, and was renowned for his interpretations of both classical and contemporary theatre, including Shakespearean roles as a member of the Royal Shakespeare Company, and over 60 productions for the Abbey Theatre, of which he was a lifelong member. In 2020, Cusack was ranked at number 14 on The Irish Times' list of Ireland's greatest film actors.

The Life and Death of Colonel Blimp is a 1943 British romantic drama war film written, produced and directed by the British film making team of Michael Powell and Emeric Pressburger. It stars Roger Livesey, Deborah Kerr and Anton Walbrook. The title derives from the satirical Colonel Blimp comic strip by David Low, but the story itself is original. The film has been acclaimed as the greatest British movie ever made and is renowned for its sophistication and directorial brilliance as well as for its script, the performances of its large cast and for its pioneering Technicolor cinematography. Among its distinguished company of actors, particular praise has been reserved for Livesey, Walbrook, and Kerr. 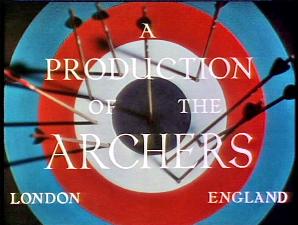 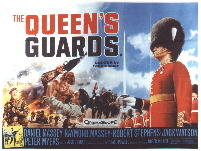 The Queen's Guards is a 1961 military drama film directed by Michael Powell from a script by Simon Harcourt-Smith and Roger Milner. It stars Daniel Massey, Raymond Massey, Robert Stephens, and Ursula Jeans.

Desmond Jeans was a British actor.

Fred Daniels born George Frederick William Daniels, 1892 – 1959. Daniels was a pioneer of still photography in the film industry and recognised by the BFI.