Smalley was born in Swinton, Lancashire, England. He studied at the Royal College of Music in London with Antony Hopkins (piano), Peter Racine Fricker and John White (both composition). [1] In addition, he studied with Alexander Goehr at Morley College, and attended Karlheinz Stockhausen's Cologne Course for New Music in 1965–66, as well as Pierre Boulez's Darmstadt summer course in 1965. [1]

As a young composer, he was awarded the 1965 Royal Philharmonic Society Prize for his orchestral work Gloria Tibi Trinitas. [2]

Smalley was appointed in 1967 as the first Composer in Residence at King's College, Cambridge. In 1969 Smalley and his successor at King's, Tim Souster, formed the live-electronic group Intermodulation. Over the next six years Intermodulation toured widely in the UK, West Germany, Poland, France and Iran, with a repertoire which included not only works by Souster and Smalley, but also music by Cornelius Cardew, Terry Riley, Frederic Rzewski, Karlheinz Stockhausen, Christian Wolff and others. Intermodulation also appeared on the occasions at the BBC Promenade Concerts, where among other works it performed Smalley's Beat Music for electronic ensemble and orchestra, and his Monody for piano and electronics (1974). [2]

In 1974 Smalley was invited to take up a three-month residency at the University of Western Australia. He returned two years later to take up a permanent position at the university's music school. Basing himself in Australia, he took Australian citizenship in 1990. On his retirement in 2007, Smalley was named Emeritus Professor at UWA. [2]

Roger Smalley was awarded the Centenary Medal in 2001 [3] and appointed a Member of the Order of Australia in the Australia Day Honours of 2011. [4]

Smalley died at the age of 72 on 18 August 2015, after a long struggle with Parkinson's disease; at its onset he regretted that he could no longer play the piano, noting that "I know what I have to play, but my fingers won't let me do it". [5]

Smalley was married to Sarah Roe, from whom he was later divorced; they had two children. [2]

His first Piano Concerto, a BBC commission for European Music Year (1985), was the recommended work in the annual UNESCO International Rostrum of Composers in 1987, the first time an Australian entry succeeded to first place. [6]

In his later works, Smalley often incorporated fragments of music by Romantic composers into his works. [7] Examples include Chopin in the Oboe Concerto, Schumann in the Cello Concerto, [8] and Brahms in the Piano Quartet Crepuscule. [7] The String Quartet No. 2 (2000) and the Piano Quintet (2003) incorporate melodies from mazurkas by Chopin.[ citation needed ]

His recordings include a CD of piano music by Australian composers, a selection of the sonatas of John White, and another of song cycles by Schumann.

Works by Roger Smalley include:

The Don Banks Music Award was established in 1984 to publicly honour a senior artist of high distinction who has made an outstanding and sustained contribution to music in Australia. [11] It was founded by the Australia Council in honour of Don Banks, Australian composer, performer and the first chair of its music board.

George Rochberg was an American composer of contemporary classical music. Long a serial composer, Rochberg abandoned the practice following the death of his teenage son in 1964; he claimed this compositional technique had proved inadequate to express his grief and had found it empty of expressive intent. By the 1970s, Rochberg's use of tonal passages in his music had invoked controversy among critics and fellow composers. A teacher at the University of Pennsylvania until 1983, Rochberg also served as chairman of its music department until 1968 and was named the first Annenberg Professor of the Humanities in 1978. 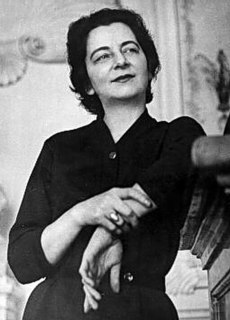 Tim Souster was a British composer and writer on music, best known for his electronic music output.

Carl Vine,, is an Australian composer of contemporary classical music. From 1975 he has worked as a freelance pianist and composer with a variety of theatre and dance companies, and ensembles. Vine's catalogue includes eight symphonies, twelve concertos, music for film, television and theatre, electronic music and numerous chamber works. Since 2000 he has been the Artistic Director of Musica Viva Australia. In 2005 he was awarded the Don Banks Music Award. In the 2014 Queen's Birthday Honours List, Vine was appointed as an Officer of the Order of Australia (AO), "for distinguished service to the performing arts as a composer, conductor, academic and artistic director, and to the support and mentoring of emerging performers." Vine currently lectures in composition and orchestration at the Sydney Conservatorium of Music.

John McCabe, was a British composer and pianist. He created works in many different forms, including symphonies, ballets, and solo works for the piano. He served as director of the London College of Music from 1983 to 1990. Guy Rickards praised him as "one of Britain's finest composers in the past half-century" and "a pianist of formidable gifts and wide-ranging sympathies".

Richard John MillsDMus BA(Hons), is an Australian conductor and composer. He is currently the Artistic Director of Victorian Opera, and formerly Artistic Director of the West Australian Opera and Artistic Consultant with Orchestra Victoria. He was commissioned by the Victoria State Opera to write his opera Summer of the Seventeenth Doll (1996) and by Opera Australia to write the opera Batavia (2001). 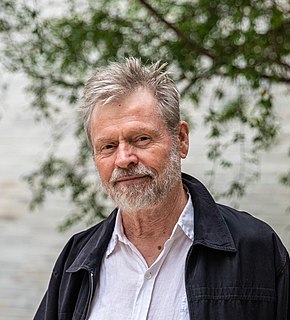 Ross Edwards is an Australian composer of a wide variety of music including orchestral and chamber music, choral music, children's music, opera and film music. His distinctive sound world reflects his interest in deep ecology and his belief in the need to reconnect music with elemental forces, as well as restore its traditional association with ritual and dance. He also recognises the profound importance of music as an agent of healing. His music, universal in that it is concerned with age-old mysteries surrounding humanity, is at the same time connected to its roots in Australia, whose cultural diversity it celebrates, and from whose natural environment it draws inspiration, especially birdsong and the mysterious patterns and drones of insects. As a composer living and working on the Pacific Rim, he is aware of the exciting potential of this vast region.

Brett Dean is a contemporary Australian composer, violist and conductor.

Nigel Westlake is an Australian composer, musician and conductor.

Ian Munro is an Australian pianist, composer, writer and music educator. His career has taken him to over 30 countries in Europe, Asia, North America and Australasia.

Philip Bračanin is an Australian composer and musicologist.

James Ledger is an Australian composer of contemporary classical music, and senior lecturer in composition at the Conservatorium of Music at the University of Western Australia, where he is Chair of Orchestral Composition.