Haubenstock-Ramati was born in Kraków. He studied composition, music theory, violin and philosophy there from 1934 to 1938, and in Lemberg from 1939 to 1941. Among his teachers were Artur Malawski and Józef Koffler. [1] From 1947 to 1950 he was head of the music department of Kraków Radio, and from 1950 to 1956 he was director of the State Music Library in Tel Aviv. [2] In 1957 he was awarded a six-month stipend for the Academy for musique concrète.[ clarification needed ] From 1957 to 1968 he was an editor of new music for Universal Edition in Vienna. [1] In addition he gave guest lectures and composition seminars in Tel Aviv, Stockholm, Darmstadt, Bilthoven (the Netherlands) and Buenos Aires, and from 1973 held a professorship at the Musikhochschule in Vienna. He died in Vienna in 1994.

Haubenstock-Ramati was also a designer and painter. [3] 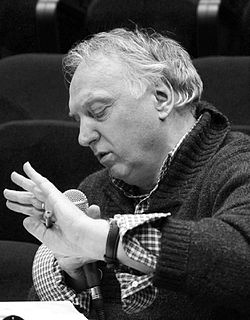