Romanian Americans are Americans who have Romanian ancestry. According to the 2017 American Community Survey, 478,278 Americans indicated Romanian as their first or second ancestry. [1] Other sources provide higher estimates for the numbers of Romanian Americans in the contemporary US; for example, the Romanian-American Network Inc. supplies a rough estimate of 1.2 million who are fully or partially of Romanian ethnicity. [5] There is also a significant number of persons of Romanian Jewish ancestry, estimated at about 225,000. [6]

The first Romanian known to have been to what is now the United States was Samuel Damian (also spelled Domien), a former priest. [7] Samuel Damian's name appears as far back as 1748, when he placed an advertisement in the South Carolina Gazette announcing the electrical demonstrations he planned to give and inviting the public to attend. Letters written in 1753 and 1755 by Benjamin Franklin attest to the fact that the two had met and had carried on discussions concerning electricity. [7] Damian remained in the States some years living in South Carolina, then travelled on to Jamaica. [8] [9]

There were several Romanians who became officers in the Union Army during the American Civil War, including Brevet Brigadier General George Pomutz, commander of the 15th Iowa Infantry Regiment, Captain Nicolae Dunca, who fought and died in the Battle of Cross Keys, and Captain Eugen Ghica-Comănești, of the 5th New York Volunteer Infantry. There were also several Romanian soldiers who fought in the Spanish–American War in 1898. [8]

The first major wave of Romanian immigrants to the United States took place between 1895 and 1920, in which 145,000 Romanians entered the country. They came from various regions in Moldavia, Transylvania and neighboring countries such as Ukraine and Serbia with significant Romanian population. [10] The majority of these immigrants particularly those from Transylvania and Banat that were under Austro-Hungarian rule left their native regions because of economic depression and forced assimilation, a policy practiced by Hungarian rulers. [11]

They settled mostly in the industrial centers in Pennsylvania and Delaware as well as in areas around the Great Lakes such as Cleveland, Chicago, and Detroit. The migrants from the Romanian Old Kingdom were mostly Jews, most of whom settled in New York. One of their prominent organizations was the United Rumanian Jews of America. 75,000 Romanian Jews emigrated in the period 1881–1914, mostly to the United States. [12]

After the Second World War, the number of Romanians who migrated to the United States increased again. This time, they settled mostly in California, Florida and New York and they came from throughout Romania. After the Romanian Revolution, increased numbers of Romanians came to the US, taking advantage of the new relaxation of Romania's emigration policies (during the communist rule, the borders were officially closed, although some people managed to migrate, including to the US). In the 1990s, New York and Los Angeles were favorite destinations for Romanian emigrants to the US. [13]

Romanian Americans are distributed throughout the U.S., with concentrations found in the Midwest, such as in the states of Michigan, Ohio, and Illinois; the Northeast, in New York, Pennsylvania and Delaware, as well as California (Los Angeles and Sacramento). In the Southeast, communities are found in Georgia (Metro Atlanta), Florida (South Florida) and Alabama (Montgomery). There are also significant communities in the Southwest US, such as in Arizona. The largest Romanian American community is in the state of New York.

The states with the largest estimated Romanian American populations are: [14]

The United States established diplomatic relations with Romania in 1880, following Romania's independence. [16] The two countries severed diplomatic ties after Romania declared war on the United States in 1941; and re-established them in 1947. Relations remained strained during the Cold War era while Romania was under communist leadership. Cold and strained during the early post-war period, U.S. bilateral relations with Romania began to improve in the early 1960s with the signing of an agreement providing for partial settlement of American property claims. Cultural, scientific, and educational exchanges were initiated, and in 1964 the legations of both nations were promoted to full embassies. [17] In March 2005, President Traian Băsescu made his first official visit to Washington to meet with President Bush, Secretary of State Condoleezza Rice, Secretary of Defense Donald Rumsfeld, and other senior U.S. officials. In December 2005, Secretary Rice visited Bucharest to meet with President Băsescu and to sign a bilateral defense cooperation agreement that would allow for the joint use of Romanian military facilities by U.S. troops. The first proof of principle exercise took place at Mihail Kogălniceanu Air Base from August to October 2007.

The Romanian culture can be seen in many different kinds, like Romanian music, newspapers, churches, cultural organizations and groups, such as the Romanian-American Congress or the Round Table Society NFP. Religion, predominantly within the Romanian Orthodox Church and the Romanian Greek Catholic Church, is an important trace of the Romanian presence in the United States, with churches in almost all bigger cities throughout the country.

In certain areas of the US, Romanian communities were first established several generations ago (in the late 19th century and early 20th century) such as in the Great Lakes region; [18] while in others, such as California and Florida, Romanian communities are formed especially by Romanians who emigrated more recently, into the late 20th century and early 21st century. After the Romanian Revolution, large numbers of Romanians emigrated to New York and Los Angeles. [13]

One of the best known foods of Romanian origin is Pastrama.

The Romanian-American Chamber of Commerce is a bilateral trade and investment organization that promotes commerce and investment between Romania and United States, and is headquartered in Washington D.C. The Chamber is composed of both Romanian and American businesses and has active chapters in New York, Washington, D.C., Florida, California and the Mid-West. It was founded in February 1990 and is celebrating its 20th year of activity in 2010. The RACC conducts a broad range of events, activities, and services and is a member organization of the Bi-National European Chambers of Commerce of the United States, which includes most of the bilateral chambers of the major EU member states.

The foreign relations of Romania are conducted by the Ministry of Foreign Affairs. Romania is a member of NATO and the European Union.

Cluj-Napoca, commonly known as Cluj, is the fourth most populous city in Romania and the seat of Cluj County in the northwestern part of the country. Geographically, it is roughly equidistant from Bucharest, Budapest and Belgrade. Located in the Someșul Mic river valley, the city is considered the unofficial capital to the historical province of Transylvania. From 1790 to 1848 and from 1861 to 1867, it was the official capital of the Grand Principality of Transylvania.

George Pomutz was a Hungarian-born Romanian officer during the Hungarian Revolution of 1848 against the Habsburgs, a general in the Union Army in the American Civil War, and a diplomat.

Constantin Angelescu was a Romanian politician who served as an interim Prime Minister of Romania for five days, between 30 December 1933 and 3 January 1934.

Vasile Pârvan was a Romanian historian and archaeologist.

Romanian Canadians are Canadian citizens of Romanian descent or Romania-born people who reside in Canada.

The history of Cluj-Napoca covers the time from the Roman conquest of Dacia, when a Roman settlement named Napoca existed on the location of the later city, through the founding of Cluj and its flourishing as the main cultural and religious center in the historical province of Transylvania, until its modern existence as a city, the seat of Cluj County in north-western Romania.

The Jewish Party, in full Jewish Party of Romania or Jewish National Party, was a right-wing political party in Romania, representing Jewish community interests. It originally followed an undercurrent of Zionism, promoting communitarianism as a prerequisite of resettlement in Palestine, and later progressed toward Religious Zionism and Revisionism. Founded by Tivadar Fischer, József Fischer, and Adolphe Stern, it had particularly strong sections in Transylvania and Bessarabia. In the Old Kingdom, where it registered least support, it was mainly represented by A. L. Zissu and Renașterea Noastră newspaper.

Andrei Marga is a Romanian philosopher, political scientist, and politician. Rector – for the second time – of the Babeş-Bolyai University in Cluj-Napoca, he was a member of the Christian-Democratic National Peasants' Party (PNŢCD), serving as Minister of Education in the Democratic Convention (CDR) coalition governments of Victor Ciorbea, Radu Vasile, and Mugur Isărescu (1997–2000). In January 2001, he replaced Ion Diaconescu as PNŢCD chairman, but resigned from his post in July 2001, amid political tensions in the party. He formed a new party, the Popular Christian Party later in the year. Later, he affiliated with the National Liberal Party (PNL). 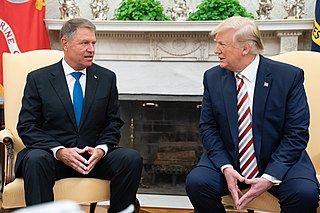 Romania–United States relations are the bilateral relations between Romania and the United States. US-Romanian diplomatic relations were formally established in 1880, with the appointment of Eugene Schuyler, a renowned and talented diplomat and historian, as the first American diplomatic representative to Romania. After Romania left the Eastern Bloc in 1989, US-Romanian relations have matured into a strategic partnership that encompasses a wide range of political, military, economic and cultural issues. The US supported Romania's entry into NATO, setting the stage for further integration into Europe. Today, Romania is a strong ally of the United States, and the two countries work together to build democracy, fight terrorism, and promote regional security and stability.

Ruxandra-Mihaela Cesereanu or Ruxandra-Mihaela Braga is a Romanian poet, essayist, short story writer, novelist, and literary critic. Also known as a journalist, academic, literary historian and film critic, Cesereanu holds a teaching position at tha Babeş-Bolyai University (UBB), and is an editor for the magazine Steaua in Cluj-Napoca.

Eugen Filotti was a Romanian diplomat, journalist and writer. As a diplomat he worked at the League of Nations in Geneva and then as minister plenipotentiary in Turkey, Greece, Bulgaria and Hungary. As minister plenipotentiary to Budapest he issued transit visas for Jews during the Holocaust. He was secretary general of the Ministry of Foreign Affairs in 1944–1945. As writer he published several translations of literary works.

Virgil Mihaiu is a Romanian writer, jazz critic, diplomat, jazz aesthetics professor, polyglot, and performer. He was co-founder and the first director of the Romanian Cultural Institute in Lisbon, and served as minister-counselor at the Romanian embassy in Portugal. Since 2015 he is director of the Casa do Brasil / Brazilian Cultural Centre, as well as the Biblioteca de Estudios Latinoamericanos, both institutions functioning under the aegis of Cluj's principal University.

Surinamese Americans are Americans of Surinamese descent. According to answers provided to an open-ended question included in the 2000 census, 2,833 people said that their ancestry or ethnic origin was Surinamese.

The Socialist Workers Party of Romania, later renamed the Independent Socialist Party of Romania, was a political party in Romania. The party was founded in Bucharest on 15 July 1928, as a leftist splinter group of the Social Democratic Party, formed by a minority that opposed the cooperation with the National Peasants' Party.