Mills was a level four coach, and served as head statistician for the first five Continental Cups. [2]

Mills worked for the Federated Co-Op for most of his life, where he worked in computer and internet technology skills, which he used in his work as a statistician for the Canadian Curling Association. He died of cancer. [3] 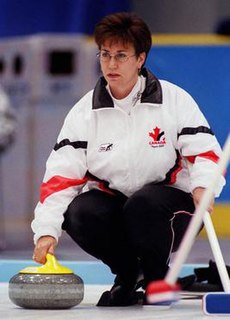 William Dickenson "Wild Bill" Hunter, was a Canadian ice hockey player, general manager and coach. Hunter was involved in hockey, Canadian football, baseball, softball and curling, but he is best known for founding the Western Hockey League (WHL), being a key player in the upstart World Hockey Association (WHA) and for his efforts to bring professional hockey to previously overlooked Western Canadian cities, especially in Edmonton and (unsuccessfully) in Saskatoon.

Ronald Charles "Owl" Northcott, is a three-time Canadian and World curling champion and a Hall of Fame member.

Vera Rose Pezer is a Canadian athlete and administrator. Pezer was the Chancellor of the University of Saskatchewan from 2007 to 2013. A sports enthusiast, Pezer is a Canadian softball champion, golfing contender, and curling champion. She has been inducted into both the Saskatchewan Sports Halls of Fame and the Canadian Curling Hall of Fame. In 2019, Pezer was named the ninth greatest Canadian curler in history in a TSN poll of broadcasters, reporters and top curlers.

Emily Blanche Farnham is a Canadian curler. Her and her team of Linda Saunders, Pat McBeath and Donna Collins from the Nutana Curling Club in Saskatoon dominated the women's curling scene during the 1973-74 season, capping the year off by winning the 1974 Macdonald Lassies Championship, Canada's national women's curling championship.

Nancy Kerr is a Canadian curler.

Ronald Steinhauer is a Canadian curler.

James R. Wilson is a Canadian curler from Shellbrook, Saskatchewan. He is a 1980 World Men's champion and a 1980 Brier champion.