Born in Barrow-in-Furness, Suart started his career as a full-back at Blackpool. He played alongside fellow defenders George Farrow and Harry Johnston in a team which also included Stanley Matthews and Stan Mortensen. Blackpool reached the 1948 FA Cup Final, but Suart missed it through injury. He transferred to Blackburn Rovers in 1949, before retiring in 1955. A 29 August 1953 issue of Soccer Star magazine described Suart as "capable at right and left-back as he is when taking over the centre-half position. A fine man to have in any defence." [1]

He took over at Wigan Athletic as player-manager, making 34 appearances in all competitions during the 1955-56 season. [2] He left the club join Scunthorpe & Lindsey United in 1956. After leading the club to promotion as Division Three North champions in 1957-58 he returned to Blackpool — the first ex-Seasider to return to the club as manager — who were then in the First Division. "I intend to work really hard at Blackpool," he said. [3] "I have my own plans and, with the co-operation of the directors, players, staff and public, I am sure they will work out to the good. Following a man like Joe Smith, with his wonderful record, will not be easy, but I feel confident, and the thought of managing the club I once played for gives me a great thrill."[ citation needed ]

Suart managed to retain Blackpool's place in the top tier for the next eight seasons and reached the League Cup semi-finals in 1962, losing to eventual winners Norwich City. While at Blackpool, he helped unearth future England internationals Alan Ball, Ray Charnley, and Emlyn Hughes, though with the abolition of the maximum wage and the new freedom which players had, he was unable to prevent many of his star players moving on. He resigned in January 1967, four months before Blackpool were relegated to Division Two, and was succeeded by Stan Mortensen. He remains Blackpool's second-longest-serving manager behind Joe Smith.[ citation needed ]

Suart became assistant manager to Tommy Docherty at Chelsea, where he spent seven years. Docherty left the club in October, and Suart briefly became caretaker manager. His services were retained by new manager Dave Sexton. He was with the club as they won the FA Cup in 1970 and the Cup Winners' Cup in 1971, but declined thereafter. When Sexton was sacked in October 1974 after a poor start to the season, Suart took charge of the first team. However, he was unable to prevent the club's slide towards relegation and was replaced by Eddie McCreadie the following April. He later became a scout at Wimbledon but, with the club in heavy financial trouble, he was released in February 2002.[ citation needed ]

Blackpool Football Club is an English professional association football club in the seaside town of Blackpool, Lancashire, which competes in League One, the third tier of English football. Founded in 1887, Blackpool's home ground since 1901 has been Bloomfield Road.

Scunthorpe United Football Club is a professional association football club based in the town of Scunthorpe, Lincolnshire, England. The team compete in League Two, the fourth tier of the English football league system. The team is nicknamed "The Iron", and has played in a home strip of claret and blue for most of the club's history. They play their home games at The Sands Venue Stadium, having moved from their original stadium, the Old Showground, in 1988. They contest Humber derby games with local rivals Grimsby Town and Hull City, as well as Lincolnshire derby games with Boston United, Gainsborough Trinity and Lincoln City.

Thomas Henderson Docherty, commonly known as "The Doc", is a Scottish former football player and manager. Docherty played for several clubs, most notably Preston North End, and represented Scotland 25 times between 1951 and 1959. He then managed a total of 13 clubs between 1961 and 1988, as well as managing the Scottish national team. Docherty was manager of Manchester United between 1972 and 1977, during which time United were relegated to the Second Division but promoted back to the First Division as Champions at the first attempt.

Ronald Edward Harris, known by the nickname "Chopper", is a former English footballer who played for Chelsea in the 1960s and 1970s. Harris is widely regarded as one of the toughest defenders of his era – along with players such as Tommy Smith and Norman Hunter – hence the nickname. His brother Allan Harris was also a professional footballer and they were teammates at Chelsea in the mid-1960s.

Following an eighth-place finish in the 1969–70 season and a poor start to the 1970–71 season, Busby was persuaded to temporarily resume managerial duties, and McGuinness returned to his position as reserve team coach. In June 1971, Frank O'Farrell was appointed as manager, but lasted just 18 months before being replaced by Tommy Docherty in December 1972. Docherty saved Manchester United from relegation that season, only to see them relegated in 1974. By that time, the trio of Best, Law and Charlton had left the club. The team won promotion at the first attempt and reached the FA Cup final in 1976, but were defeated by Southampton. They reached the final again in 1977, beating Liverpool 2–1. Docherty was dismissed shortly afterwards, following the revelation of his affair with the club physiotherapist's wife.

Marvin Hinton is an English former footballer who made nearly 400 appearances in the Football League playing as a defender for Charlton Athletic and Chelsea.

Joseph Smith was an English professional football player and manager. He is tenth in the list of England's top-flight goal scorers with 243 league goals to his name. He was manager of Blackpool for 23 years and guided them to victory in the 1953 FA Cup Final, the only time they have won the competition since their 1887 inception.

Graham Oates is an English former professional footballer. He played as a midfielder.

The 1946–47 season was Blackpool F.C.'s 39th season in the Football League. They competed in the 22-team Division One, then the top tier of English football, finishing fifth.

The 1966–67 season was Blackpool F.C.'s 59th season in the Football League. They competed in the 22-team Division One, then the top tier of English football, finishing bottom. As a result, they were relegated to Division Two. 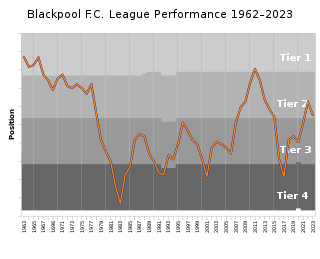 The history of Blackpool Football Club between 1962 and the present day covers the periods of relative decline after their successful first half of the 20th century.