Born in St. Louis, Missouri, Stein wrote scores for many low budget horror and exploitation films during the 1950s and 1960s, most of which were released by American International Pictures. These included It Conquered the World , Attack of the Crab Monsters , Invasion of the Saucer Men , Attack of the 50 Foot Woman , Hot Rod Gang , The Premature Burial and The Haunted Palace . He also provided scores for major studio productions such as Francis Ford Coppola's The Rain People , and Richard Rush's Getting Straight .

His song "Pigs Go Home" was sampled by rapper Eminem for his 1999 song "Guilty Conscience". [1]

Some of Stein's papers and scores, especially for the films Not of This Earth and Of Love and Desire can be found in the archives of the Music Library at Washington University in St. Louis.

American International Pictures (AIP) was an independent film production and distribution company formed on April 2, 1954 as American Releasing Corporation (ARC) by James H. Nicholson, former Sales Manager of Realart Pictures Inc., and Samuel Z. Arkoff, an entertainment lawyer. It was dedicated to releasing low-budget films packaged as double features, primarily of interest to the teenagers of the 1950s, 1960s, and 1970s. Nicholson and Arkoff formed ARC in 1954; their first release was The Fast and the Furious in 1955.

Akira Ifukube was a Japanese composer, best known for his works on the film scores of the Godzilla movies since 1954. 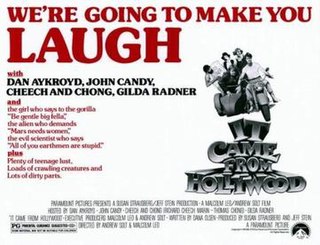 It Came from Hollywood is a 1982 American comedy documentary film compiling clips from various B movies. Written by Dana Olsen and directed by Malcolm Leo and Andrew Solt, the film features wraparound segments and narration by several famous comedians, including Dan Aykroyd, John Candy, Gilda Radner, and Cheech and Chong. Sections of It Came from Hollywood focus on gorilla pictures, anti-marijuana films and the works of Ed Wood. The closing signature song was the doo wop hit "What's Your Name" by Don and Juan.

Many works of fiction have featured UFOs. In most cases, as the fictional story progresses, the Earth is being invaded by hostile alien forces from outer space, usually from Mars, as depicted in early science fiction, or the people are being destroyed by alien forces, as depicted in the film Independence Day. Some fictional UFO encounters may be based on real UFO reports, such as Night Skies. Night Skies is based on the 1997 Phoenix UFO Incident. 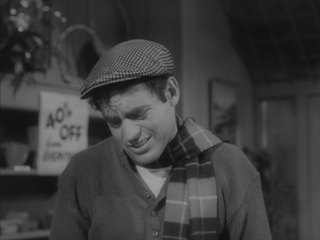 Jonathan Haze is an American actor, producer and screenwriter. He is best known for his work in Roger Corman films, especially the 1960 black comedy cult classic, The Little Shop of Horrors, in which he played florist's assistant Seymour Krelboyne.

Yoshifumi Tajima was an actor in Japanese kaijū films, best known for his role as Kumayama in Mothra vs. Godzilla. He was born in Kobe, Japan.

Angelo Francesco Lavagnino was an Italian composer, he was born in Genoa. He is best known for scoring many films, including Legend of the Lost, Conspiracy of Hearts, Gorgo, The Legion's Last Patrol, The Naked Maja, Daisy Miller, and two directed by Orson Welles, Othello and Chimes at Midnight. He also scored several peplums and spaghetti westerns.

John Dierkes was an American actor who appeared in a number of classic Hollywood films. Before becoming an actor, he had been an economist.

Lou Rusoff was a Canadian-born screenwriter and producer best known for his work with American International Pictures.

Paul Blaisdell was an American painter, sculptor and visual effects creator, best remembered for his work in science fiction and horror B movies of the 1950s.

Russ Bender was an American actor.