Last updated July 13, 2020
This article is about the author. For the Canadian sailor, see Ross MacDonald.
Not to be confused with John D. MacDonald.

Ross Macdonald is the main pseudonym that was used by the American-Canadian writer of crime fiction Kenneth Millar ( /ˈmɪlər/ ; December 13, 1915 – July 11, 1983). He is best known for his series of hardboiled novels set in Southern California and featuring private detective Lew Archer.

Brought up in the province of Ontario, Canada, Macdonald eventually settled in the state of California, where he died in 1983.

Millar was born in Los Gatos, California, and raised in his Canadian parents' native Kitchener, Ontario, where he started college. When his father abandoned his family unexpectedly, Macdonald lived with his mother and various relatives, moving several times by his 16th year. In Canada, he graduated from the University of Western Ontario in History and English. He met and married Margaret Sturm in 1938. They had a daughter, Linda, who died in 1970. He went on to study at the University of Michigan, graduating with a PhD. [1]

Millar began his career writing stories for pulp magazines and used his real name for his first four novels. Of these he completed the last, The Dark Tunnel, in 1944. After serving at sea as a naval communications officer from 1944 to 1946, Millar returned to Michigan, where he obtained his Ph.D. degree in literature.

For his fifth novel, in 1949, he wrote under the name John Macdonald in order to avoid confusion with his wife, who was achieving her own success writing as Margaret Millar. He then changed his pen name briefly to John Ross Macdonald, before settling on Ross Macdonald in order to avoid being confused with fellow mystery writer John D. MacDonald, who was writing under his real name. Millar would use the pseudonym "Ross Macdonald" on all his fiction from the mid '50s forward.

In the early 1950s, he returned to California, settling for some thirty years in Santa Barbara, the area where most of his books were set. In these the city in which Lew Archer is based goes under the fictional name of Santa Teresa. In 1983 Macdonald died of Alzheimer's disease.

Macdonald first introduced the tough but humane private eye Lew Archer in the 1946 short story "Find the Woman" (credited then to "Ken Millar"). A full-length novel featuring him, The Moving Target , followed in 1949 and was the first in a series of eighteen. Macdonald mentions in the foreword to the Archer in Hollywood omnibus that his detective derives his name from Sam Spade's partner, Miles Archer, and from Lew(is) Wallace, author of Ben-Hur , though he was patterned on Philip Marlowe.

The novels were hailed by genre fans and literary critics alike. [2] The Lew Archer novels are recognized as some of the most significant American mystery books of the mid 20th century, bringing a literary sophistication to the genre. The critic John Leonard declared that Macdonald had surpassed the limits of crime fiction to become "a major American novelist". [3] He has also been called the primary heir to Dashiell Hammett and Raymond Chandler as the master of American hardboiled mysteries. [4]

Macdonald's writing built on the pithy style of his predecessors by adding psychological depth and insights into the motivations of his characters. [5] Their plots of "baroque splendor" were complicated and often turned on Archer's unearthing family secrets of upwardly mobile clients, sometimes going back over several generations. [6] Lost or wayward sons and daughters were a theme common to many of the novels. [7] Critics have commented favorably on Macdonald's deft combination of the two sides of the mystery genre, the "whodunit" and the psychological thriller. [8] Even his regular readers seldom saw a Macdonald denouement coming.

Screenwriter William Goldman, who adapted Macdonald's stories to film, called his works "the finest series of detective novels ever written by an American". [2] Tom Nolan in his Ross Macdonald, A Biography, [9] wrote, "By any standard he was remarkable. His first books, patterned on Hammett and Chandler, were at once vivid chronicles of a postwar California and elaborate retellings of Greek and other classic myths. Gradually he swapped the hard-boiled trappings for more subjective themes: personal identity, the family secret, the family scapegoat, the childhood trauma; how men and women need and battle each other, how the buried past rises like a skeleton to confront the present. He brought the tragic drama of Freud and the psychology of Sophocles to detective stories, and his prose flashed with poetic imagery."

Millar's first four novels, all non-series standalones, were all initially published using his real name. They have since been intermittently reissued, sometimes as by "Ross Macdonald".

Frank Morrison Spillane, better known as Mickey Spillane, was an American crime novelist, whose stories often feature his signature detective character, Mike Hammer. More than 225 million copies of his books have sold internationally. Spillane was also an occasional actor, once even playing Hammer himself.

Margaret Ellis Millar was an American-Canadian mystery and suspense writer. 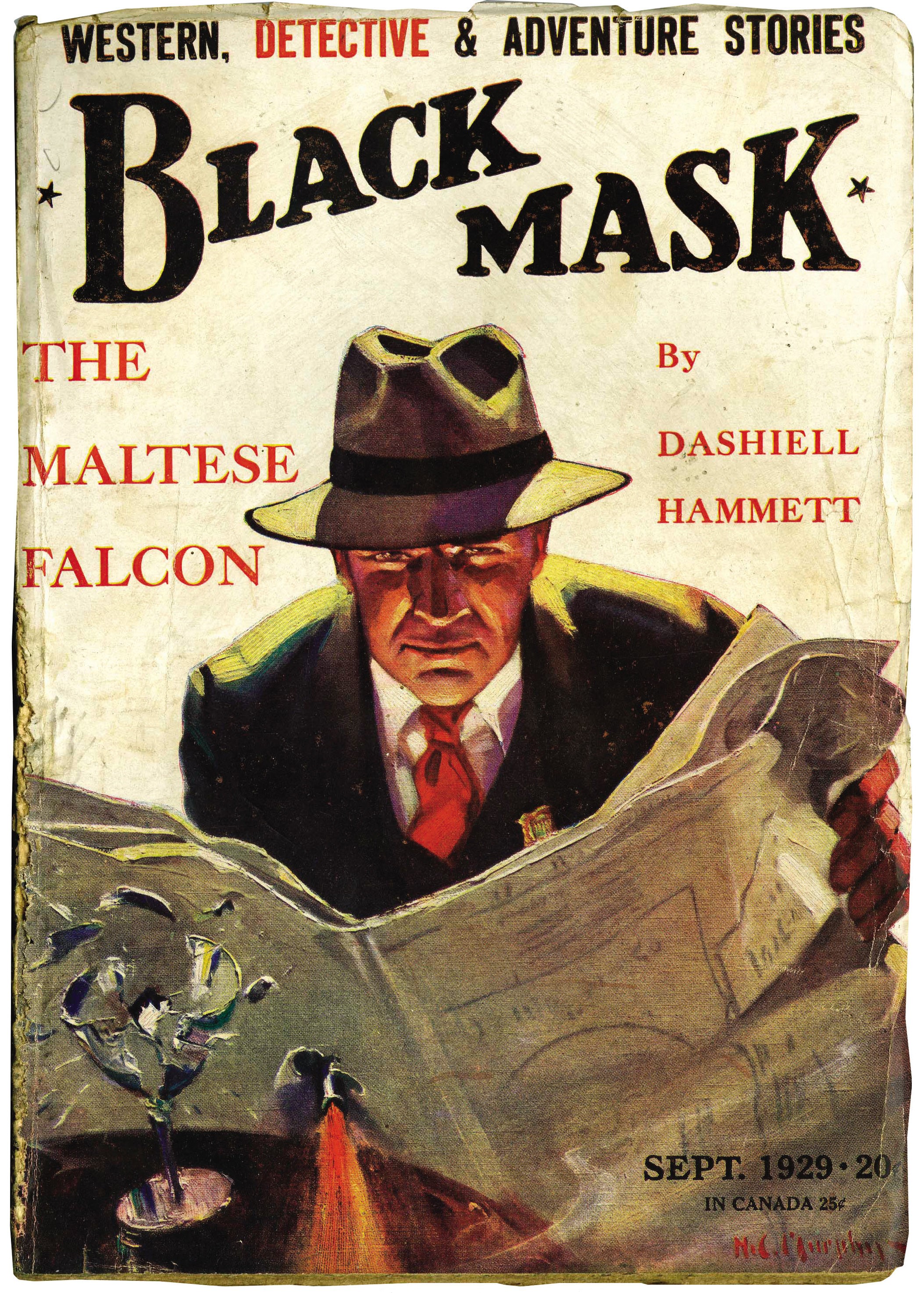 Hardboiled fiction is a literary genre that shares some of its characters and settings with crime fiction. The genre's typical protagonist is a detective who battles the violence of organized crime that flourished during Prohibition (1920–1933) and its aftermath, while dealing with a legal system that has become as corrupt as the organized crime itself. Rendered cynical by this cycle of violence, the detectives of hardboiled fiction are often antiheroes. Notable hardboiled detectives include Philip Marlowe, Mike Hammer, Sam Spade, Lew Archer, and The Continental Op.

Lew Archer is a fictional character created by American-Canadian writer Ross Macdonald. Archer is a private detective working in Southern California. Between the late 1940s and the early 1970s, the character appeared in 18 novels and a handful of shorter works as well as several film and television adaptations. Macdonald's Archer novels have been praised for building on the foundations of hardboiled fiction by introducing more literary themes and psychological depth to the genre. Critic John Leonard declared that Macdonald had surpassed the limits of crime fiction to become "a major American novelist" while author Eudora Welty was a fan of the series and carried on a lengthy correspondence with Macdonald. The editors of Thrilling Detective wrote: "The greatest P.I. series ever written? Probably." 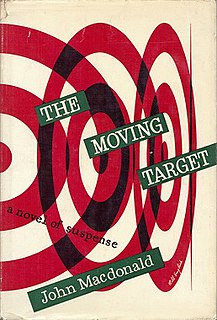 The Moving Target is a 1949 mystery novel by American writer Ross Macdonald, who at this point used the name "John Macdonald". 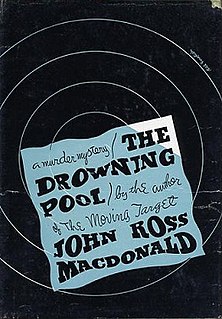 The Drowning Pool is a 1950 mystery novel by American writer Ross Macdonald, his second book in the series revolving around the cases of private detective Lew Archer.

Blue City is a thriller written in 1947 by Ross Macdonald. The novel was originally released under his real name, Kenneth Millar, by Alfred A. Knopf, while a condensed version was serialized in the August and September 1950 issues of Esquire. In 1986 it was considerably adapted to film.

The Way Some People Die is a detective mystery written in 1951 by American author Ross Macdonald. It is the third book featuring his private eye Lew Archer.

The Galton Case is the eighth book in the Lew Archer Series by Ross Macdonald. The book was published in 1959. Macdonald thought with this book he found his own voice as a writer.

The Doomsters is a 1958 mystery novel by American writer Ross Macdonald, the seventh book in his Lew Archer series.

William Louis DeAndrea was an American mystery writer and columnist.

Black Money is a novel by US American mystery writer Ross Macdonald. Published in 1966, it is among the most powerful of all Ross Macdonald's novels and was his own personal choice as his best book.

Santa Teresa has been used by several authors as the name of an invented city.

Marcia Muller is an American author of fictional mystery and thriller novels.

Archer at Large is an omnibus of Ross Macdonald's Lew Archer novels, published by Knopf in 1970. It contains the following novels:

The Zebra-Striped Hearse is a detective mystery written in 1962 by American author Ross Macdonald, the tenth book featuring his private eye, Lew Archer.