Rothschild Island is a black rugged island 39 kilometres (24 mi) long, mainly ice covered but surmounted by prominent peaks of Desko Mountains in Antarctica, 8 kilometres (5 mi) west of the north part of Alexander Island in the north entrance to Wilkins Sound.

The island was sighted from a distance by the French Antarctic Expedition (c1908-1910), and named by Charcot in honour of Baron Edouard de Rothschild (1868-1949), head of the Rothschild banking family of France and president of de Rothschild Frères.

In the subsequent explorations of the area by the British Graham Land Expedition (BGLE) (c1934-1937) the feature was believed to be a mountain connected to Alexander Island. Geologically this might be true—but it has not been proven by any means due to a lack of anything like a complete geological survey of the region.

However Rothschild Island's insularity was reaffirmed by the United States Antarctic Service (USAS, c1939-1941) who photographed and roughly mapped the island from the air.

Rothschild Island was mapped in detail from air photos taken by the Ronne Antarctic Research Expedition (RARE c1947-1948) and by Searle of the Falkland Islands Dependencies Survey (FIDS) in 1960, and from US governmental satellite imagery taken in 1974.

Although this very remote part of the world has never been inhabited and is protected by the Antarctic Treaty System, which bans industrial development, waste disposal and nuclear testing, there is still a threat to these fragile ecosystems from increasing tourism, primarily on cruises across the Southern Ocean from the port of Ushuaia, Argentina.

Sherman Island is an ice-covered island of Antarctica about 51 kilometres (32 mi) long and 16 kilometres (10 mi) wide, lying south of Thurston Island in the middle of Peacock Sound. The feature rises above the Abbot Ice Shelf which occupies the sound. 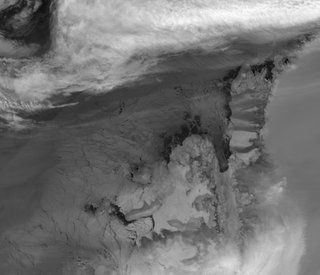 Charcot Island or Charcot Land is an island administered under the Antarctic Treaty System, 56 kilometres (30 nmi) long and 46 kilometres (25 nmi) wide, which is ice covered except for prominent mountains overlooking the north coast. Charcot Island lies within the Bellingshausen Sea, 102 kilometres (55 nmi) west of Alexander Island, and about 57 kilometres (31 nmi) north of Latady Island. A notable landmark of the island is its northernmost point, Cape Byrd.

The Douglas Range is a sharp-crested range, with peaks rising to 3,000 metres, extending 120 km in a northwest–southeast direction from Mount Nicholas to Mount Edred and forming a steep east escarpment of Alexander Island within the British Antarctic Territory, overlooking the north part of George VI Sound.

Uranus Glacier is a glacier on the east coast of Alexander Island, Antarctica, 30 kilometres long and 10 km (6 mi) wide at its mouth, flowing east into George VI Sound immediately south of Fossil Bluff. Along the south face of the glacier is an east–west escarpment called Kuiper Scarp.

Lazarev Bay is a rectangular bay, 15 nautical miles (28 km) long and 13 nautical miles (24 km) wide, which separates Alexander Island from Rothschild Island and is bounded on the south side by the Wilkins Ice Shelf, which joins the east portion of Rothschild Island and the west portion of Alexander Island. Two minor islands, Dint Island and Umber Island, lie merged within the ice of the Wilkins Ice Shelf within Lazarev Bay.

Borg Massif is a mountain massif, about 50 km (30 mi) long and with summits above 2,700 metres (8,900 ft), situated along the northwest side of the Penck Trough in Queen Maud Land, East Antarctica. The tallest peak, at 2,727 metres (8,947 ft), is Hogsaetet Mountain. The parallel, ice-filled Raudberg Valley and Frostlendet Valley trend northeastward through the massif, dividing its summits into three rough groups:

Wilkins Sound is a seaway in Antarctica that is largely occupied by the Wilkins Ice Shelf. It is located on the southwest side of the Antarctic Peninsula between the concave western coastline of Alexander Island and the shores of Charcot Island and Latady Island farther to the west.

The Desko Mountains are a west-northwest–east-southeast mountain range on Rothschild Island, off northwest Alexander Island. The mountain range spans 20 nautical miles (37 km) from Bates Peak to Overton Peak and rises to about 1,000 metres (3,300 ft) at Enigma Peak, Fournier Ridge.

Gildea Glacier is a glacier 10 kilometres (6 mi) long and 5 kilometres (3 mi) wide flowing southwestward from Craddock Massif between Mount Slaughter and Mount Atkinson into Nimitz Glacier, in the Sentinel Range of the Ellsworth Mountains, Antarctica. The upper portion of the glacier also receives ice from Hammer Col and southern Vinson Massif.

Dorsey Island is a mainly ice-covered island, 22 kilometres (12 nmi) long, lying in Wilkins Sound off the west coast of Alexander Island, Antarctica. The highest point of the island is Mount Snell which rises to about 500 m. It was discovered and roughly mapped from aircraft by members of East Base of the United States Antarctic Service, 1939–41, and was named after Herbert G. Dorsey, Jr., of the U.S. Weather Bureau, a meteorologist at East Base who devised a method of predicting with exceptional accuracy the periods in which weather would be suitable for flying. It was remapped from air photos taken by the Ronne Antarctic Research Expedition, 1947–48, by D. Searle of the Falkland Islands Dependencies Survey in 1960. The position of the island and its outline were corrected from U.S. Landsat imagery of 1973–75 and 1979.

Mozart Ice Piedmont is an ice piedmont, 60 nautical miles (110 km) long-running in a NW-SE direction and 15 nautical miles (28 km) wide in its widest part, on the west coast of Alexander Island, Antarctica. Mapped from air photos taken by the Ronne Antarctic Research Expedition (RARE) in 1947, by Searle of the Falkland Islands Dependencies Survey (FIDS) in 1960. Named by the United Kingdom Antarctic Place-Names Committee (UK-APC) for Wolfgang Amadeus Mozart (1756–1791), famous Austrian composer. Some landforms within this area are named in association with the Mozart Ice Piedmont such as Figaro Nunatak, along with a few other landforms.

Mount Edred is a prominent ice-covered mountain, 2,195 metres (7,200 ft) high, which stands 10 nautical miles (19 km) inland from George VI Sound, lies about 12 miles (19 km) north of Galileo Cliffs, and marks the southern limit of the Douglas Range on Alexander Island, Antarctica. It was first photographed from the air on November 23, 1935 by Lincoln Ellsworth and mapped from these photos by W.L.G. Joerg. Its east side was roughly surveyed in 1936 by the British Graham Land Expedition and resurveyed in 1949 by the Falkland Islands Dependencies Survey (FIDS). It was named by the FIDS for Edred, a Saxon king of England in the 10th century. The west face of the mountain was mapped from air photos taken by the Ronne Antarctic Research Expedition, 1947–48, by D. Searle of the FIDS in 1960. Mount Edred is the ninth highest peak of Alexander Island, succeeded by Mount Calais and proceeded by Mount Spivey.

Eros Glacier is a glacier on the east coast of Alexander Island, Antarctica, 7 nautical miles (13 km) long and 2 nautical miles (4 km) wide at its mouth, flowing southeast from the Planet Heights into George VI Sound immediately north of Fossil Bluff. It was probably first seen on November 23, 1935, by Lincoln Ellsworth, who flew directly over the glacier and obtained photos of features north and south of it. The mouth of the glacier was observed and positioned by the British Graham Land Expedition in 1936 and the Falkland Islands Dependencies Survey (FIDS) in 1948 and 1949. The glacier was mapped in detail from air photos taken by the Ronne Antarctic Research Expedition, 1947–48, by D. Searle of the FIDS in 1960. It was named by the UK Antarctic Place-Names Committee after the minor planet Eros in association with nearby Pluto Glacier and Uranus Glacier.

Hale Glacier is a glacier about 6 nautical miles (11 km) long, located just east of Mount Simpson on Thurston Island, Antarctica, and flowing southwest to the Abbot Ice Shelf in Peacock Sound. It was delineated from air photos taken by U.S. Navy Squadron VX-6 in January 1960, and was named by the Advisory Committee on Antarctic Names (US-ACAN) for Lieutenant Bill J. Hale, U.S. Navy, a helicopter pilot aboard USS Burton Island who made exploratory flights to Thurston Island in February 1960.

Merger Island is an ice-covered island 6 kilometres (3 nmi) long at the entrance of Haydn Inlet, lying off the west coast of Alexander Island, Antarctica. It was first mapped from air photos taken by the Ronne Antarctic Research Expedition in 1947–48 by D. Searle of the Falkland Islands Dependencies Survey in 1960. The name given by the UK Antarctic Place-Names Committee is descriptive, the island being almost submerged in the surrounding Wilkins Ice Shelf.

Handel Ice Piedmont is a large ice piedmont lying north and west of the Colbert Mountains, between Haydn Inlet and Schubert Inlet on the west-central coast of Alexander Island, Antarctica. Apparently first seen from the air by the United States Antarctic Service in 1940 but not separately mapped, it was first mapped from air photos taken by the Ronne Antarctic Research Expedition, 1947–48, by Searle of the Falkland Islands Dependencies Survey in 1960. The feature was named by the UK Antarctic Place-Names Committee for George Frideric Handel, the German composer.