Mohan Babu is a street thug doing petty crimes for a local corrupt politician. The film is about how the street thug (rowdy) ends up being a good samaritan because of his wife.

The music was composed by Bappi Lahiri. Manchu Bhakthavatsalam Naidu, known popularly as Mohan Babu, is an Indian Actor and Producer, known for his works Predominantly in Telugu cinema. An Alumnus of the Madras Film Institute, Mohan Babu has acted in more than five hundred feature films in lead, supporting and a variety of roles.

Political Rowdy is a 2005 Tollywood film directed by Adi. The film stars Mohan Babu, Charmme Kaur, Prakash Raj, and Abbas in important roles. As well as playing the lead role, Mohan Babu also produced the film. The film is a remake of the Tamil movie Adi Thadi. 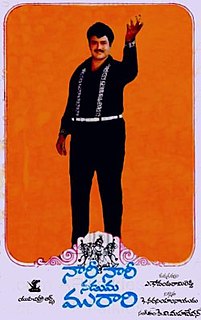 Nari Nari Naduma Murari is a 1990 Telugu-language comedy film, produced by K. Murari under the Yuva Chitra Arts banner and directed by A. Kodandarami Reddy. It stars Nandamuri Balakrishna, Shobana, Nirosha in the lead roles and music composed by K. V. Mahadevan. This is the 50th film of Nandamuri Bala Krishna and it was recorded as a Super Hit at the box office. During the pre-climax scene, Balakrishna does not appear for more than 20 minutes, which is uncommon in Telugu films. 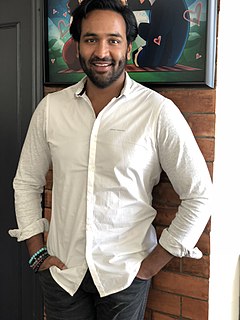 Vishnu Manchu is an Indian film actor, producer and director known for his works in Telugu cinema and television.

Nippu Ravva is a 1993 Telugu-language action film, produced by M. V. Srinivas Prasad for Yuvarathna Arts, and written and directed by A. Kodandarami Reddy. Nandamuri Balakrishna and Vijayashanti appear in lead roles with music composed by Bappi Lahiri and Raj-Koti. Nippu Ravva and Bangaru Bullodu, also starring Balakrishna, were released on the same day and both ran for over 100 days. 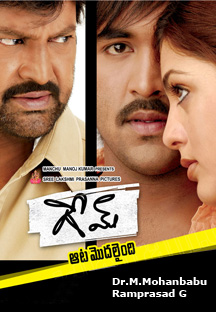 Game is a 2006 Telugu slice of life drama film directed by Ram Prasad. It stars Mohan Babu and Vishnu Manchu in lead roles with Shobana, Parvati Melton, Sumalatha and Giri Babu in supporting roles. The film's background score and soundtrack were composed by music composer, Joshua Sridhar. The soundtrack for the movie was released on 27 July 2006. The movie is based on Hollywood Movie Changing Lanes which was remade in three Indian languages, Taxi No. 9211 (2006) in Hindi, TN-07 AL 4777 (2009) in Tamil and this movie itself in Telugu. Unlike the previous versions, Game received negative reviews and failed at the box-office. 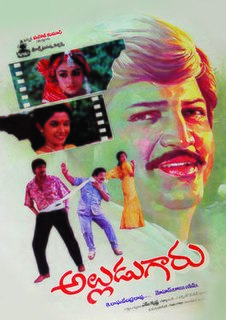 Alludugaru or Alludu Garu is a 1990 Telugu drama film directed by K. Raghavendra Rao and produced by Mohan Babu under Lakshmi Prasanna Films. This commercially successful film ran for more than 100 days. 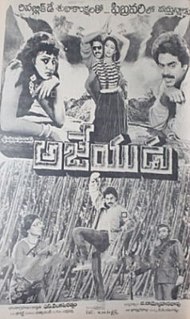 Ajeyudu is a 1987 Tollywood film, directed by G. Ram Mohan Rao and produced by S. Venkataratnam under Sri Pallavi Films. It stars Venkatesh and Shobana in the lead roles, with music composed by Chakravarthy. The film was Average at the box office.

Appula Appa Rao is a 1991 Telugu-language comedy film, produced by B. Suresh under the Kamadhenu Creations banner, presented by Rama Prabha and directed by E. V. V. Satyanarayana. It stars Rajendra Prasad, Shobana in the lead roles and music composed by Rajan-Nagendra. The film was recorded as a Blockbuster at the box office.

Ghattamaneni Ramesh Babu is an Indian film actor and producer who ia known for his work in Telugu cinema. Born to actor Krishna, Ramesh Babu made his on screen debut with the film Alluri Seetharama Raju in 1974. He acted in over 15 films before retiring from acting in 1997. In 2004, he became a producer and established Krishna Productions Private Ltd, a film production company named after his father. He produced films like Arjun and Athidhi, both of which had his brother Mahesh Babu in leading role. He recently acted as a presenter for 2011 successful film Dookudu. 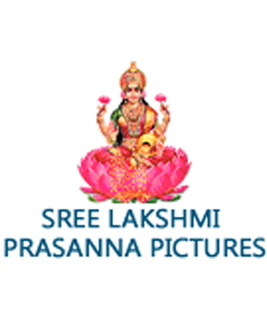 Sree Lakshmi Prasanna Pictures is an Indian film production company established by Manchu Mohan Babu on the name of his daughter Manchu Lakshmi Prasanna, in 1982. The company is based in Hyderabad. The first movie was Pratigna which successfully ran for 100 Days. Some of the most popular blockbusters are ''Assembly Rowdy'', Rowdygari Pellam, Alludu Garu, Major Chandrakanth, Pedarayudu and Rayalaseema Ramanna Chowdary have made the Sree Lakshmi Prasanna Pictures (SLPP) as one of the premier film houses in the country. 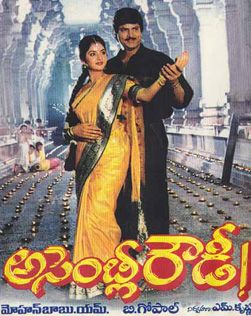 Assembly Rowdy is a 1991 Telugu film directed by B. Gopal and produced by Mohan Babu. The film stars Mohan Babu and Divya Bharati in the leading roles. The film is a remake of the 1990 Tamil film Velai Kidaichuduchu and was later again remade in Hindi in 1996, titled Loafer, starring popular actors Anil Kapoor and Juhi Chawla.

Rangoon Rowdy is a 1979 Telugu drama film directed by Dasari Narayana Rao and produced by Vadde Sobhanadri under Vijaya Madhavi Pictures. The film was presented by Vadde Kishore. The film stars mahanati Savitri, Krishnam Raju, Jaya Prada, Mohan Babu and Deepa in the lead roles. The music was composed by J. V. Raghavulu. It is Krishnam Raju's 100th film. It is the first Indian film to be shot in Burma.

Jailor Gaari Abbayi is a 1994 Telugu-language action drama film, produced by Dr. Venkata Raj Gopal under the Sri Supraja Productions banner and directed by Sarath. It stars Krishnam Raju, Jayasudha, Jagapati Babu and Ramya Krishna, and has music composed by Raj-Koti. The film was a Hit at the box office. Krishnam Raju won the Nandi Award for Best Character Actor for this film.

Rana is a 1998 Telugu-language action film, produced by K. Meenakshi Naidu under the Rudvega Productions banner and directed by A. Kodandarami Reddy. It stars Nandamuri Balakrishna, Heera Rajagopal, Bhagyashree in the lead roles and music composed by Koti. 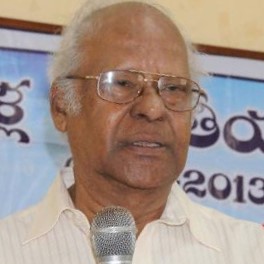 Collector Gari Bharya is a 2010 Telugu drama film directed by Tekula Kripakar Reddy. The film stars Bhumika Chawla and Prakash Raj in lead roles. The film was released on 5 November 2010. The film was dubbed and released in Tamil as Penn Adimai Illai.

Soggadi Pellam is a 1996 Telugu drama film produced by M A Gafoor and directed by Muthyala Subbaiah. The film features Mohan Babu, Ramya Krishnan and Monica Bedi in lead roles. The film's musical score is by Saluri Koteswara Rao and was released on 1996. The film was a hit at the box-office. The film was remade of Tamil film Ellame En Rasathan is a 1995 Tamil drama film produced and directed by Rajkiran. The film features Rajkiran, Sangita and Roopa Sree in lead roles.