Last updated May 28, 2022
Governing body of association football in the Netherlands

For three seasons in the 2010s, the KNVB and its Belgian counterpart operated a joint top-level women's league, the BeNe League, until the two countries dissolved the league after the 2014–15 season and re-established their own top-level leagues. The KNVB is based in the central municipality of Zeist. With over 1.2 million members the KNVB is the single largest sports association in the Netherlands. [1]

In 1889, the Nederlandse Voetbal en Athletiek Bond was founded. Due to certain disagreements several football clubs ended their association with it and together to form Koninklijke Nederlandse Voetbalbond (KNVB) which was later renamed to present name. [2] It was one of the founding members of FIFA in 1904 and one of the first non-British football association in Europe. [3] [ self-published source? ] The first Dutch football club was formed in 1879 in Haarlem. [4] The Netherlands Football League Championship had already existed for a decade unofficially when the association was founded. The KNVB strongly disapproved the professionalism of football in 1909. It said that "it will protest against it by all means necessary." [5] In 2012 KNVB launched an 11-point action plan, called 'Football for Everyone' to promote gay football players in coming out. It released a 30-second video named 'Gay? It doesn't matter'; prepared by broadcaster BNN. The video was also broadcast during the Dutch national football teams World Cup qualifier match against Andorra held in October 2012. [6]

During the 2014 FIFA World Cup, it collaborated with Royal Philips to open six football clinics across Brazil. Bert van Oostveen is the current Secretary-General of KNVB. [1]

Phillip John William Cocu is a Dutch professional football manager and former player who was most recently the manager of Championship club Derby County.

HVV is an amateur football club in The Hague, Netherlands. It was founded in 1883 as an extension of HCC, (The) Hague Cricket Club. In 1978, on the occasion of the club's centenary, Queen Juliana granted the club royal patronage, with prefix Koninklijke ("Royal"), because of its pioneering role in sport, including in the formation of the Royal Dutch Football Association (KNVB) in 1889. Since then it has been called Koninklijke Haagse Cricket & Voetbal Vereniging, abbreviated KHC&VV. The club's grounds since 1898 have been at the 1,200-capacity "De Diepput", on the border between Benoordenhout and Wassenaar. It now also plays tennis, squash and judo and has around 1750 members.

The Netherlands national under-17 football team represents the Netherlands in international football at this age level and is controlled by the Koninklijke Nederlandse Voetbalbond — KNVB, the governing body for football in the Netherlands. They are coached by Mischa Visser. 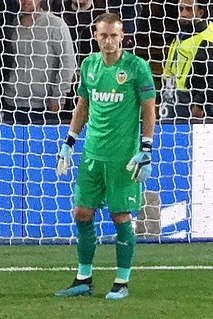 Jacobus Antonius Peter Johannes "Jasper" Cillessen is a Dutch professional footballer who plays as a goalkeeper for La Liga club Valencia and the Netherlands national team.

Shanice Janice van de Sanden is a Dutch footballer who plays for VFL Wolfsburg in the German Bundesliga. She is a member of the Netherlands national football team.

FC Utrecht Vrouwen was the women's football section of Dutch club FC Utrecht based in Utrecht. Established in 2007, as one of the founding members of the professional Dutch women's football league the team competed in the league from its inaugural season (2007–08) until 2011–12 and the BeNe League from 2012–13 until the team's dissolution in January 2014. The club won the Dutch Cup once and the Dutch Super Cup once.
Late July 2021 it was reported that FC Utrecht was looking into provisionally restarting a women's team in the Eredivisie Vrouwen in season 2023-24

Jong PSV is a Dutch football team, based in Eindhoven. It is the reserve team of PSV Eindhoven and plays in the Eerste Divisie since the 2013–14 season. 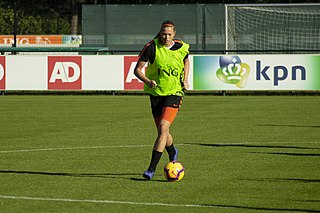 Marieke Anouk Dekker is a Dutch footballer who plays for Braga. She is a member of the Netherlands national team.

Sari van Veenendaal is a Dutch footballer who plays as a goalkeeper for PSV and captains the Dutch national team. With the Netherlands, Van Veenendaal was part of the 2017 squad who won their first European Championship. 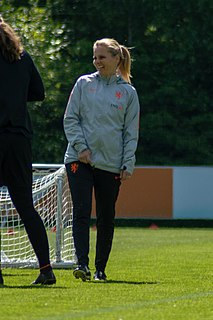 Sarina Petronella Wiegman, also known as Sarina Wiegman-Glotzbach, is a Dutch football manager and former player who is the current head coach of the England women's national team.

Liza Estefany van der Most is a Dutch footballer who plays as defender for AFC Ajax in the Eredivisie and the Netherlands women's national football team.

Devyne Fabian Jairo Rensch is a Dutch professional footballer who plays as a right-back for Ajax and the Netherlands national team.