Royall Tyler (June 18, 1757 – August 26, 1826) was an American jurist and playwright. He was born in Boston, graduated from Harvard University in 1776, and then served in the Massachusetts militia during the American Revolution. He was admitted to the bar in 1780, became a lawyer, and fathered eleven children. In 1801, he was appointed a Justice of the Vermont Supreme Court. He then wrote a play, The Contrast’’, which was produced in 1787 in New York City, shortly after George Washington's inauguration. It is considered the first American comedy. Washington attended the production, which was well-received, and Tyler became a literary celebrity.

Born in Boston, Massachusetts on June 18, 1757, he was the son of wealthy merchant and political figure Royall Tyler (died 1771) and Mary (Steele) Tyler. He attended Boston Latin School and Harvard University, where he earned a reputation as a quick-witted joker. His roommate at Harvard was Christopher Gore.

After graduating from Harvard in 1776, Tyler briefly served in the Massachusetts militia during the American Revolution, including taking part in John Hancock's Rhode Island expedition.

In late 1778, he began to study law with Francis Dana. He was admitted to the bar in 1780 and practiced in Portland, Maine before moving to Braintree, Massachusetts.

In Braintree Tyler lodged with Mary and Richard Cranch. Mary Cranch was the sister of Abigail Adams, and Tyler soon met John Quincy Adams, with whom he became friendly, and Abigail ("Nabby"), whom he courted. Tyler had developed a reputation as a profligate while in college, supposedly squandering half his inheritance on parties, in grog shops and pursuing women after the death of his father. In a letter to her husband John Adams, Abigail noted that despite having "a sprightly fancy, a warm imagination and an agreeable person," Tyler was "rather negligent in pursueing (sic) his business ... and dissipated two or 3 more years of his Life and too much of his fortune to reflect upon with pleasure; all of which he now laments but cannot recall." John Quincy Adams apparently enjoyed Tyler's company, but questioned his integrity and did not think him suitable marriage material. Nabby Adams eventually ended the relationship, to the approval of her parents and brother.

Tyler served again in the militia in 1787, as aide de camp to Benjamin Lincoln during the suppressing of Shays's Rebellion. After the rebels fled he was dispatched to Vermont to negotiate for the arrest of the rebels.

Mary Palmer Tyler lived to age 91. She died in Brattleboro on July 13, 1866, and was buried next to her husband.

A Federalist, Tyler served as Windham County State's Attorney. In 1801, he was appointed a Justice of the Vermont Supreme Court, even though the Vermont House of Representatives was controlled by the Democratic-Republican Party. In 1807 he became Chief Justice, and served until 1812.

In 1812 he ran unsuccessfully for the United States Senate as a Democratic-Republican, losing the legislative election because by then the Federalists controlled Vermont General Assembly.

From 1811 to 1814 Tyler was a Professor of Jurisprudence at the University of Vermont.

In 1787, his comedy The Contrast was performed in New York City, the first American comedy to be performed by professional actors. The play's first public showing was shortly after George Washington's inauguration and Washington and several members of the First Congress attended. The play was well-received, and Tyler became a literary celebrity. [1]

Tyler continued to write, and frequently collaborated with his friend Joseph Dennie, [2] [3] including co-writing a satirical column which appeared in Dennie's newspaper The Farmer's Weekly Museum. [4] [5] He published The Algerine Captive in 1797 and wrote several legal tracts, six plays, a musical drama, two long poems, many essays, and a semifictional travel narrative, 1809's The Yankey in London.

In later life Royall Tyler admitted to his youthful arrogance and profligate conduct, but said he regretted only the limitations which his past placed upon his career and later ambitions.

He was believed to have fathered a child with Katharine Morse, the cleaning woman in the Harvard College buildings when Tyler was a student. [6] This son, Royal Morse, was born in 1779 and came to public attention as a leader of the 1834 anti-Catholic riots in Cambridge.

According to Palmer family descendants[ citation needed ], Tyler fathered one daughter, and possibly two, with his landlady and mother-in-law Elizabeth Palmer while her husband, Joseph Pearse Palmer was away. The girls were Sophia, born in 1786, and Catherine, born in 1791.

Tyler was accused[ by whom? ] of starting a sexual relationship with Mary Palmer before she was old enough to marry. In her version of events, her neighbors believed that she was pregnant before she married Royall Tyler because the neighbors didn't know that they had married in secret.[ citation needed ]

Tyler died in Brattleboro, Vermont on August 26, 1826, as the result of facial cancer that he had suffered from for ten years. [7] He was buried in Brattleboro's Prospect Hill Cemetery. [8]

Tyler has been identified as the model for Jaffrey Pyncheon in Nathaniel Hawthorne's The House of the Seven Gables . [9] Hawthorne's wife Sophia Peabody was a daughter of Elizabeth [Palmer] Peabody a daughter of Joseph Pearce Palmer and Elizabeth Hunt. The Palmer family preserved stories of Tyler's sexual misbehavior as a young man, some of which were known to Hawthorne, and which he used in his novel. [10]

The main theater at the University of Vermont is named for him. [11]

His descendant Royall Tyler (born 1936) is a well known scholar and translator of Japanese literature.

Abigail Adams was the wife and closest advisor of John Adams, as well as the mother of John Quincy Adams. She is sometimes considered to have been a Founder of the United States, and is now designated as the first Second Lady and second First Lady of the United States, although these titles were not used at the time. She and Barbara Bush are the only two women to be the wife of one U.S. president and the mother of another.

The Boston Brahmins or Boston elite are members of Boston's traditional old upper class. They are often associated with Harvard University, Anglicanism, aristocratic clubs such as the Somerset in Boston, the Knickerbocker in New York, the Metropolitan in Washington D.C., and traditional Anglo-American customs and clothing. Descendants of the earliest English colonists are typically considered to be the most representative of the Boston Brahmins.

James Elliot was an American soldier, lawyer, author and politician. A holder of local and state offices throughout his life, he was most notable for his service as a United States Representative from Vermont. 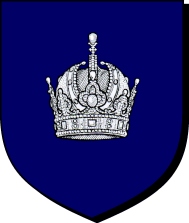 The Crowninshield family is an American family that has been prominent in seafaring, political and military leadership, and the literary world. The founder of the American family emigrated from what is now Germany in the 16th century. The family is one of several known collectively as Boston Brahmins. 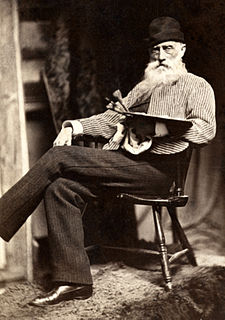 William Morris Hunt, American painter, was born at Brattleboro, Vermont, to Jane Maria (Leavitt) Hunt and Hon. Jonathan Hunt, who raised one of the preeminent families in American art. William Morris Hunt was the leading painter of mid-19th-century Boston, Massachusetts.

The Algerine Captive: or the Life and Adventures of Doctor Updike Underhill: Six Years a Prisoner among the Algerines is one of America's first novels, published anonymously in 1797 by early American author Royall Tyler. The novel takes the form of a fictitious memoir.

Nathaniel Peabody was a U.S. physician and dentist from Boston and Salem, Massachusetts, having studied at Dartmouth. He was descended from John Paybody of Plymouth of 1635, and in early Massachusetts records, the name of these ancestors was often spelled Pabodie. Nathaniel Peabody was a member of one of the prominent families recognized in society and known as the Boston Brahmins. Married Elizabeth ("Eliza") Palmer (1778-1853). He was father of three noteworthy intellectual women: Elizabeth Palmer Peabody, Mary Tyler Peabody Mann, and Sophia Amelia Peabody Hawthorne.

Peabody is a surname, and may refer to: 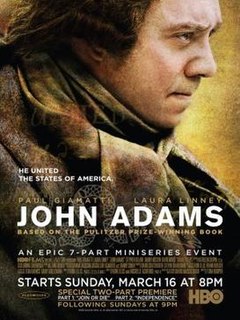 John Adams is a 2008 American television miniseries chronicling most of U.S. President John Adams's political life and his role in the founding of the United States. Paul Giamatti portrays John Adams. The miniseries was directed by Tom Hooper. Kirk Ellis wrote the screenplay based on the 2001 book John Adams by David McCullough. The biopic of John Adams and the story of the first 50 years of the United States was broadcast in seven parts by HBO between March 16 and April 20, 2008. John Adams received widespread critical acclaim and many prestigious awards. The show won four Golden Globe awards and 13 Emmy awards, more than any other miniseries in history.

Horace Mann Jr. (1844–1868) was an American botanist, son of the man considered "father of American Public Education". His mother was one of the famous Peabody Sisters Mary Tyler Peabody Mann. Mentored in botany by Henry David Thoreau, whom he accompanied on an expedition to Minnesota, Mann took classes in zoology with Louis Agassiz and assisted William Tufts Brigham botanize the Hawaiian Islands. Mann was to have headed the botanical garden at Harvard, but died of tuberculosis at age twenty-four. His own herbarium was purchased by Cornell University and became the basis of that university's collection. He is credited with the discovery of more than 100 species.

Joseph Dennie was an American author and journalist who was one of the foremost men of letters of the Federalist Era. A Federalist, Dennie is best remembered for his series of essays entitled The Lay Preacher and as the founding editor of Port Folio, a journal espousing classical republican values. Port Folio was the most highly regarded and successful literary publication of its time, and the first important political and literary journal in the United States. Timothy Dwight IV once referred to Dennie as "the Addison of America" and "the father of American Belles-Lettres."

Thomas Green Fessenden was an American author and editor who worked in England and the United States.

Lot Hall was a Vermont attorney, politician, and judge. A veteran of the American Revolution, Hall served as a Justice of the Vermont Supreme Court from 1794 to 1800. His name sometimes appears in written records as "Lott Hall".

Samuel Knight was a legal and political figure in Vermont during its period as an independent republic and the early years of its statehood. Among the offices in which he served were Associate Justice of the Vermont Supreme Court, and Chief Justice (1791-1793). 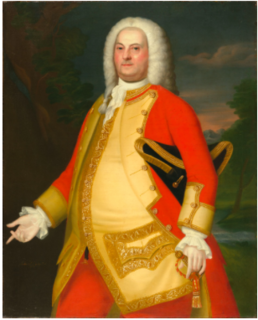 William Brattle was the Attorney General of Province of Massachusetts Bay as well as a physician, the Major General for all of the militia in Massachusetts Bay (1771), a selectmen for Cambridge for 14 years and politician in the Massachusetts House of Representatives. During the American Revolution, he was Major General of the Royal Militia and played a role in the Powder Alarm. He was known as "the wealthiest man" in Massachusetts and was buried in Halifax, Nova Scotia. Lorenzo Sabine said of him, "A man of more eminent talents, and of greater eccentricities, has seldom lived."