Ruapuke Island is one of the southernmost islands in New Zealand's main chain of islands. It lies 15 kilometres (9.3 mi) to the southeast of Bluff and 32 kilometres (20 mi) northeast of Oban on Stewart Island/Rakiura. It was named "Bench Island" upon its discovery by Captain James Cook in 1770, but has rarely been known by any other name than its Māori name, which means "two hills". [1] Ruapuke Island was called Goulburn Island by Captain John Kent , [2] named after Frederick Goulburn, a Government official in New South Wales, but the whalers generally called it Long Island, or Robuck. [3] The island covers an area of about 16 km2 (6 sq mi). It guards the eastern end of Foveaux Strait.

The island formerly had a Māori population of 200. Notable Māori inhabitants included Kāi Tahu chief Tūhawaiki and John Topi Patuki, MLC. A mission station was established on the island in 1843 by the Rev Johan Wohlers, but it too is long gone. [4]

The island was the site of several shipwrecks during the latter half of the 19th century, though most were without the loss of life. One exception was the collision of the cutters "Annie" and "Deveron" during a storm in April 1894, which resulted in the loss of two lives. [1] The island and its surrounding rocks and reefs are still a hazard to the fishing vessels which ply Foveaux Strait, itself a notoriously dangerous stretch of water. [5] [6]

Sheep were farmed on the island for some time, though it is now uninhabited, and privately owned by descendants of Tūhawaiki. The island is notable for its bird life, and it is a breeding site for the endangered yellow-eyed penguin. [7] Cetaceans such as southern right whales may be spotted around the island during migration seasons. [8]

The centre of the island is flat with a height of 41 m (135 ft), and there are hummocks on its north, south and west ends. The island is covered mainly with stunted trees, but also has open scrub land and some low-lying marshland. The island's major geographic features include three large bays, the largest of which is Henrietta Bay, in the southwest, named for the brig Elizabeth Henrietta which ran aground there in February 1824. [9] The other bays are Lagoon Bay (in the west) and Caroline Bay (in the north west). The small Waitokariro Lagoon lies immediately inland from Henrietta Bay. The three bays are separated by two large peninsulas, and two more peninsulas extend at the northern and southern ends of the island, culminating in North Head and South Head respectively. One of these peninsulas, that between Lagoon and Caroline Bays, is a tombolo. North Head is a cliffy promontory rising to a hummock, 62 m (203 ft) high. Close to the westernmost point, on the peninsula separating Lagoon Bay and Henrietta Bay, the island reaches its highest point, 64 m (210 ft) above sea level. [10] It is these two hummocks which give the island its name. [1]

The eastern coast is dominated by two long, generally straight beaches to the north, and a series of smaller coves to the south. Between the longer beaches and smaller coves lies an inlet, the mouth of the only river system on the island. A smaller island, Green Island, some 100 hectares (250 acres) in extent, lies 2 kilometres (1.2 mi) off the central east coast, and another small island, Bird Island, which is about a third the size of Green Island, lies 3.5 kilometres (2.2 mi) west of Ruapuke's westernmost point. Other small islets and groups of islets can be found off the coast of Ruapuke. One group of small islets, the South Islets, none of them larger than 10 ha (25 acres) in size, lie immediately to the south of South Head, and beyond these to the southwest is the similarly sized Hazelburgh Islet group. Between Green Island and South Head is a further small group, the Breaksea Islands. Numerous other smaller rocks and reefs surround the island. [10]

The Three Kings Islands are a group of 13 uninhabited islands about 55 kilometres (34 mi) northwest of Cape Reinga, New Zealand, where the South Pacific Ocean and Tasman Sea converge. They measure 6.85 km2 (2.64 sq mi) in area. The islands are on a submarine plateau, the Three Kings Bank, and are separated from the New Zealand mainland by an 8 km wide, 200 to 300 m deep submarine trough. Therefore, despite relative proximity to the mainland, the islands are listed with the New Zealand Outlying Islands. The islands are an immediate part of New Zealand, but not part of any region or district, but instead Area Outside Territorial Authority, like all the other outlying islands except the Solander Islands. 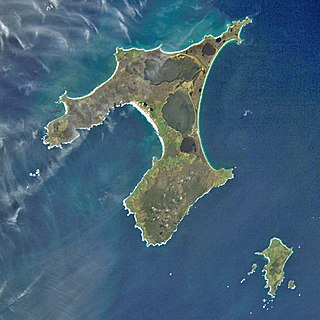 Chatham Island is by far the largest island of the Chatham Islands group, in the south Pacific Ocean off the eastern coast of New Zealand's South Island. It is said to be "halfway between the equator and the pole, and right on the International Date Line", though the point in fact lies ca. 173 miles WSW of the island's westernmost point. The island is called Rekohu in Moriori, and Wharekauri in Māori. 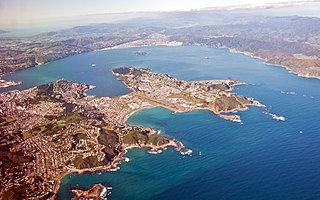 Foveaux Strait (Te Ara a Kiwa or Te Ara a Kewa separates Stewart Island, New Zealand's third largest island, from the South Island. According to a Maori legend, the strait was created by Kewa the obedient whale when traditional Maori ancestor Kiwa summoned the whale to create a waterway. Three large bays, Te Waewae Bay, Oreti Beach and Toetoes Bay, sweep along the strait's northern coast, which also hosts Bluff township and harbour. Across the strait lie the Solander Islands, Stewart Island, Dog Island and Ruapuke Island. The strait is about 130 km long, and it widens and deepens from east to west. The strait lies within the continental shelf area of New Zealand, and was probably dry land during the Pleistocene epoch.

Te Waewae Bay is the westernmost of three large bays lying on the Foveaux Strait coast of Southland, New Zealand, the others being Oreti Beach and Toetoes Bay. Twenty-seven kilometres in length, the western end of the bay is mountainous, with the southern terminus of the Southern Alps and Fiordland National Park.

Toetoes Bay is the easternmost of three large bays lying on the Foveaux Strait coast of Southland, New Zealand, the others being Te Waewae Bay and Oreti Beach. The 240 km Mataura River drains to sea at Toetoes Bay, first passing through the Toetoes Harbour estuary. Thirty kilometres in length, the bay is the southern end of the Awarua Plain, an area of swampy land stretching inland for about fifteen kilometres. The eastern end of the bay is close to Slope Point, the South Island's southernmost point, and the western end of the Catlins.

Tamatea / Dusky Sound is a fiord on the southwest corner of New Zealand, in Fiordland National Park. 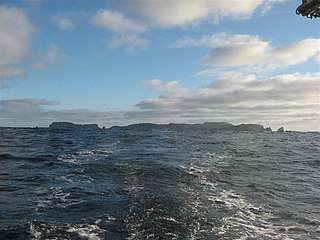 The Snares Islands/Tini Heke, also known as The Snares, is a small group of uninhabited islands lying about 200 km south of New Zealand's South Island and to the south-southwest of Stewart Island. The Snares consist of the main North East Island and the smaller Broughton Island as well as the Western Chain Islands some 5 km (3.1 mi) to the west-southwest. Collectively, the Snares have a total land area of 3.5 km2 (1.4 sq mi). 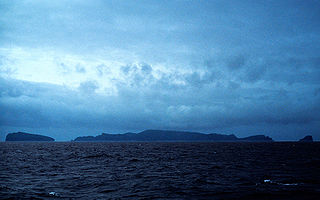 The Antipodes Islands are inhospitable and uninhabited volcanic islands in subantarctic waters to the south of – and territorially part of – New Zealand. The 21 km2 archipelago lies 860 km to the southeast of Stewart Island/Rakiura, and 730 km to the northeast of Campbell Island. They are very close to being the antipodal point to Normandy in France, meaning that the city farthest away is Cherbourg, France.

Tūhawaiki — often known as Hone Tūhawaiki, John Tūhawaiki or Jack Tūhawaiki, or by his nickname of "Bloody Jack" — became a paramount chief of the Ngāi Tahu Māori iwi in the southern part of the South Island of New Zealand, and was based predominantly on Ruapuke Island. He gained his nickname from early interactions with Foveaux Strait whalers on account of his red coats bought off soldiers in Australia that he and his whailing crew wore.

The Titi/Muttonbird Islands are located near Stewart Island in the far south of New Zealand. The islands are not permanently inhabited, and are named for the traditional seasonal harvesting ("muttonbirding") of the sooty shearwater by Māori. These birds are known as "muttonbirds" due to their supposedly mutton-like taste.

His Majesty's colonial brig Elizabeth Henrietta was completed in 1816 for New South Wales service, but capsized on the Hunter River, Australia later that year with the loss of two lives. The ship was wrecked in 1825. 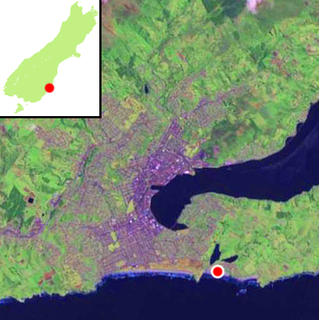 Ocean Grove, also known as Tomahawk and Toma haka in Te Reo Maori, is a suburb in the southeast of the New Zealand city of Dunedin. A semi-rural residential suburb on the Pacific coast at the southwestern end of the Otago Peninsula, Ocean Grove is located 6.5 kilometres (4.0 mi) southeast of Dunedin city centre. 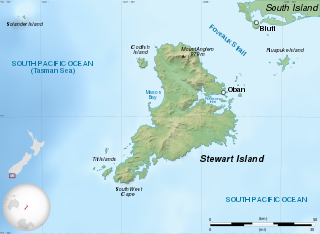 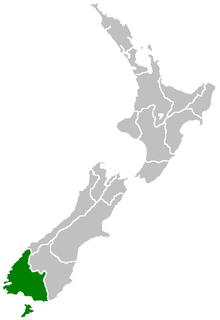