The Ruby Tower was a six-story building in Manila, Philippines, completed c. 1965 [lower-alpha 1] that collapsed on August 2, 1968, during the Casiguran earthquake killing over 250 people.

The building, constructed at a cost of $250,000, [1] was located on the corner of Doroteo Jose and Teodora Alonso Streets in Santa Cruz, a district in the northern part of Manila. [3] The reinforced-concrete building measured 45.5 m × 30 m (149 ft × 98 ft), with a height of 20.5 m (67 ft). It was of a slab-and-beam design supported by columns, the rear wall with the primary resistance to shear or torsional forces. [4] The mixed commercial and residential building contained 38 commercial spaces on the lower two floors and 76 residential units on the upper four floors. [5] It housed 600 to 1000 people. [2]

The 7.3-magnitude 1968 Casiguran earthquake, centered more than 200 km (120 mi) away, [4] hit at 4:19 am [5] and caused the building to collapse in a pancake fashion burying over 500 people. A volunteer force of over 6,000 mobilized to free the victims trapped in the rubble, as there was no government disaster plan in place at the time. Many people were rescued alive, including about 30 who later died from their injuries. [3] At least 260 people were injured. [5] [lower-alpha 2] The rescue effort turned to recovery and lasted over a week. Not all of the bodies were identified. [3]

A part of the northern end of the floors one and two remained standing. The lower levels collapsed straight downward, while the upper floors shifted south as they collapsed, with the roof shifting 30 feet (9.1 m) south and 10 feet (3.0 m) east of its original location. [5] Its long columns buckled in the earthquake.

By August 4, Philippine soldiers and heavy construction equipment were in use. [6] They were assisted for 10 days by personnel of the United States military. [1] In 80% of the building, the collapsed floors were separated by debris (portions of columns and walls) leaving spaces of 3 feet (0.91 m) or less, with very limited lateral movement. [1] As a result, many holes had to be cut through the concrete with jackhammers and oxygen-acetylene torches to reach the pockets. [1] Philippine and US military, and civilian contractors all participated in this work. [1]

Around 3,000 rescuers, including soldiers and civilians, worked daily, all coordinated by Brigadier General Gaudencio Tobias of the Philippine Army. [1] A nearby high school was used as a command center, canteen and rest area, medical clinic and morgue. [1] The US effort was directed by Rear Admiral Draper Kauffman and included US Navy and US Marine Corps personnel from Subic Bay Naval Complex and US Army and US Air Force personnel from Clark Air Force Base. [1]

The Philippine Boys Scouts managed the collection and identification of items of value as they were retrieved. [1] The last of the 268 survivors pulled from the building were two girls, aged 9 and 12, who were found on August 9, having survived in the wreckage for 125 hours. Another 260 bodies were retrieved. [1] [lower-alpha 3]

The collapse was attributed to the design, poor workmanship and concrete quality. [4] Court cases were brought alleging both civil and criminal liability. [4] A case against the construction company was brought before the Supreme Court, where the company was found liable for poor construction including insufficient reinforcement in columns, and joints not built to specifications. [10]

The Ruby Tower Memorial Hall is a two-story structure on the site, made from the portion of the building that remained standing, where the victims are remembered. Built in 1974, the shrine includes 100 black and white photographs of people killed in the collapse. [3]

The collapse of the World Trade Center occurred during the terrorist attacks of September 11, 2001, after the Twin Towers were struck by two hijacked commercial airliners. One World Trade Center was hit at 8:46 a.m. Eastern time and collapsed at 10:28 a.m. Two World Trade Center was hit at 9:03 a.m. and collapsed at 9:59 a.m. The resulting debris severely damaged or destroyed more than a dozen other adjacent and nearby structures, ultimately leading to the collapse of 7 World Trade Center at 5:21 p.m. A total of 2,763 people were killed in the crashes, fires, and subsequent collapses, including 2,192 civilians, 343 firefighters, and 71 law enforcement officers as well as all the passengers and crew on the airplanes, which included 147 civilians and the 10 hijackers.

Casiguran, officially the Municipality of Casiguran, is a 2nd class municipality in the province of Aurora, Philippines. According to the 2020 census, it has a population of 26,564 people. 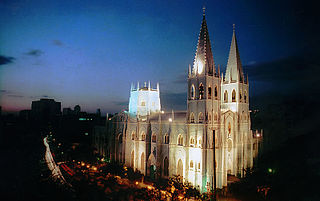 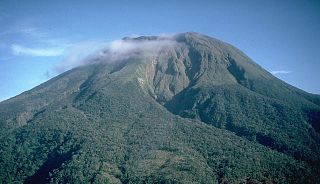 The 1990 Luzon earthquake struck the island of Luzon in the Philippines at 4:26 p.m. on July 16 (PDT) or 3:26 p.m. (PST) with an estimated moment magnitude of 7.8 and a maximum Mercalli intensity of IX (Violent) and produced a 125 km-long ground rupture that stretched from Dingalan, Aurora to Kayapa, Nueva Vizcaya. The event was a result of strike-slip movements along the Philippine Fault and the Digdig Fault within the Philippine Fault System. The earthquake's epicenter was near the town of Rizal, Nueva Ecija, northeast of Cabanatuan City. An estimated 1,621 people were killed, most of the fatalities located in Central Luzon and the Cordillera region.

The 1968 Casiguran earthquake occurred on 04:19:22 local time on August 2 with a moment magnitude of 7.3 and a maximum Mercalli intensity of IX (Violent). The thrust earthquake's epicenter was in Casiguran, Quezon. A small non-destructive tsunami was generated and at least 207 people were killed. The majority of the deaths occurred in the collapse of a six-story building in Manila. 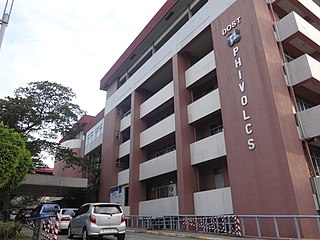 The Philippine Institute of Volcanology and Seismology is a Philippine national institution dedicated to provide information on the activities of volcanoes, earthquakes, and tsunamis, as well as other specialized information and services primarily for the protection of life and property and in support of economic, productivity, and sustainable development. It is one of the service agencies of the Department of Science and Technology.

The Minor Basilica and Metropolitan Cathedral of the Immaculate Conception, also known as the Manila Cathedral, is the cathedral of Manila and basilica located in Intramuros, the historic walled city within today's modern city of Manila, Philippines. It is dedicated to the Immaculate Conception of the Blessed Virgin Mary as the Patroness of the country. The cathedral serves as the episcopal seat of the Archbishop of Manila. 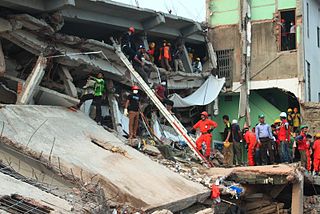 The Metrobank Center is a 318 m (1,043 ft) mixed-used skyscraper, located in Bonifacio Global City, Taguig, Metro Manila. It has been the tallest building in the Philippines since its completion in 2017.

Binondo Church, also known as the Minor Basilica and National Shrine of Saint Lorenzo Ruiz and formerly known as Our Lady of the Most Holy Rosary Parish, is located in the District of Binondo, Manila fronting Plaza San Lorenzo Ruiz, in the Philippines. This church was founded by Dominican priests in 1596 to serve their Chinese converts to Christianity. The original building was destroyed in 1762 by British bombardment. A new granite church was completed on the same site in 1852 however it was greatly damaged during the Second World War, with only the western façade and the octagonal belfry surviving. 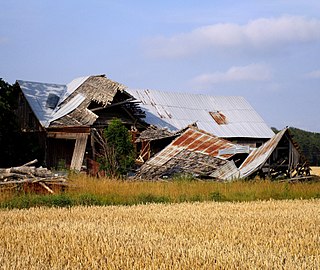 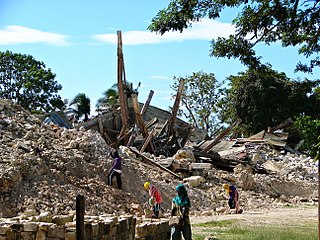 The 2013 Bohol earthquake occurred on October 15 at 8:12:31 PST in Bohol, an island province located in Central Visayas, Philippines. The magnitude of the earthquake was recorded at Mw 7.2, with epicenter 6 kilometres (3.7 mi) S 24° W of Sagbayan, and its depth of focus was 12 kilometres (7.5 mi). It affected the whole Central Visayas region, particularly Bohol and Cebu. The earthquake was felt in the whole Visayas area and as far as Masbate island in the north and Cotabato provinces in southern Mindanao. 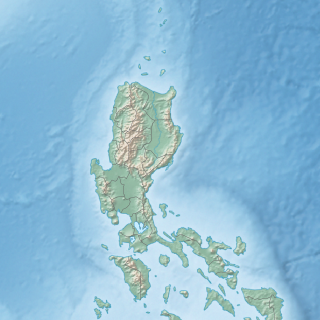 On April 22, 2019, a 6.1 magnitude earthquake struck the island of Luzon in the Philippines, leaving at least 18 dead, 3 missing and injuring at least 256 others. Despite the fact that the epicenter was in Zambales, most of the damage to infrastructure occurred in the neighboring province of Pampanga, which suffered damage to 29 buildings and structures.

On December 12, 1999, a Mw7.3 earthquake struck the northern coast of Zambales. It was felt in various provinces on the island of Luzon including as far north as Ilocos Norte and as far south as Quezon.

The 2019 Cotabato earthquakes were an earthquake swarm which struck the province of Cotabato on the island of Mindanao in the Philippines in October 2019. Three of these earthquakes were above 6.0 on the moment magnitude scale with a Mercalli intensity of VIII. More than 40 people have been reported dead or missing and nearly 800 were injured as a result of these events.

The 1973 Ragay Gulf earthquake occurred at around 16:30 recorded as a magnitude 7.0 Ms tremor on the surface wave magnitude scale and with a maximum intensity of IX (Extreme) on the MMI according to the National Geophysics Data Center, while according to the Philippine Institute of Volcanology and Seismology the tremor had an intensity of VIII on the PHIVOLCS Earthquake Intensity Scale. It killed 14 people, about 100 were injured and an estimated $2 million in damages.