His autobiography is "Theater meines Lebens. Erinnerungen" ("Theater of my life: Memories"), published in Berlin in 1955.

He made his 1900 debut as an actor at the Deutsches Theater in Berlin. In 1907, he took over the Berlin Theater with Carl Meinhardt, then in 1911 to the Hebbel Theater and 1913, the comedy house. Finally, he was the owner of the theater at Nollendorfplatz.

Rudolf Bernauer wrote lyrics for the Berlin operettas: Der liebe Augustin (1912), Wie einst im Mai  [ de ] (1913), The mysterious history of the conductor Kreisler (1922), for which his own simultaneous stage ("Kreislerbühne") was developed, and Kreislers Eckfenster (1923).

His songs include: "Die Männer sind alle Verbrecher" ("All men are criminals..."), "Untern Linden, untern Linden" ("Unter den Linden") and "Es war in Schöneberg im Monat Mai" ("It was in Schöneberg in the month of May"). In 1924, he gave up all of his stages.

In 1935, he emigrated (fled) to London. He had a large apartment at Viktoria-Luise-Platz 1, in Berlin-Schöneberg (Germany), but the whole building was destroyed during the war. On a new building at this address in 1998 a memorial plaque was dedicated to him. [2] The unveiling of the plaque was attended by his daughter, the actress Agnes Bernelle. [3]

He staged a total of two movies, but wrote screenplays and texts for some other films.

Bernauer was Jewish Hungarian but he converted to Roman Catholicism in the mid-1930s along with Bernelle. His wife, Bernelle's mother Emmy (née Erb), was a German Protestant. [4] [5]

The earliest known work is as a lyricist: [1]

Walter Kollo was a German composer of operettas, Possen mit Gesang, and Singspiele as well as popular songs. He was also a conductor and a music publisher.

Bruno Bernhard Granichstaedten was an Austrian composer and librettist. He composed sixteen operettas and music for various films. He contributed the song "Zuschau'n kann i net" to the musical play The White Horse Inn. He emigrated from Austria, ending up in the United States of America in 1940, where he was only able to earn his living by playing the piano at night clubs.

Fritz Löhner-Beda, born Bedřich Löwy, was an Austrian librettist, lyricist and writer. Once nearly forgotten, many of his songs and tunes remain popular today. He was murdered in Auschwitz III Monowitz concentration camp.

Filmzauber, literally 'Film Magic', is a Posse mit Gesang in four scenes by Walter Kollo and Willy Bredschneider, with a German libretto by Rudolf Bernauer and Rudolph Schanzer. A parody of silent films, Filmzauber premiered in Berlin in 1912. An English version, The Girl on the Film, translated and adapted by James T. Tanner with additional music by Albert Szirmai, premiered in London in 1913 and was later performed in New York and elsewhere.

Maytime is a musical with music by Sigmund Romberg and lyrics and book by Rida Johnson Young, and with additional lyrics by Cyrus Wood. The story is based on the 1913 German operetta Wie einst im Mai, composed by Walter Kollo, with words by Rudolf Bernauer and Rudolph Schanzer. The story, set in New York, is told in episodes covering a long period, from 1840 to the 20th century. Wealthy young Ottillie is in love with Dick, but they are kept apart by family and circumstance. Years later, their descendants marry. Maytime introduced songs such as "The Road to Paradise", "Will You Remember?" and "Jump Jim Crow".

Rudolf Nelson was a German composer of hit songs, film music, operetta and vaudeville, and the founder and director of the Nelson Revue, a significant cabaret troupe on the 1930s Berlin nightlife scene.

Claire Waldoff, born Clara Wortmann, was a German singer. She was a famous kabarett singer and entertainer in Berlin during the 1910s and 1920s, chiefly known for performing ironic songs in the Berlin dialect and with lesbian undertones and themes.

Erik Charell, born as Erich Karl Löwenberg, was a German theatre and film director, dancer and actor. He is best known as the creator of musical revues and operettas, such as The White Horse Inn and The Congress Dances.

Posse mit Gesang is a form of popular German-language music drama, that developed in the late 18th and early 19th centuries. Early examples are sometimes called 'Possenspil' or 'Possenspiel'. It is also sometimes referred to simply as 'Posse' (farce).

Ernst Bach was an Austrian actor and playwright. He made his debut as an actor at the Wiener Raimond Theater in 1899. In 1903 he moved to Berlin to the Residenztheater, then to Lustspielhaus in 1905, where he became Regisseur in 1906 and in 1908 Oberregisseur. In 1909 he started what was to become a 20-year partnership with Franz Arnold with whom he wrote more than 20 plays, mainly farces and operettas. Their first hit play was The Spanish Fly in 1913. They went on to become one of the leading playwriting teams in Weimar Germany. In 1917 he became the director of the Muenchener Volkstheater in Munich, whilst continuing his writing partnership with Franz Arnold at Starnberg. He remained in Munish until his death in 1929.

Franz Arnold (1878–1960) was a German actor and playwright. He frequently collaborated with Ernst Bach after their debut play The Spanish Fly was a hit. He emigrated to Britain in 1933.

August Neidhart was an Austrian writer and librettist.

Rudolf Österreicher, also Rudolf Oesterreicher, was an Austrian writer, librettist, comedy author, author of cabaret texts and biographer. From 1945 to 1947 he was director of the Wiener Stadttheater. 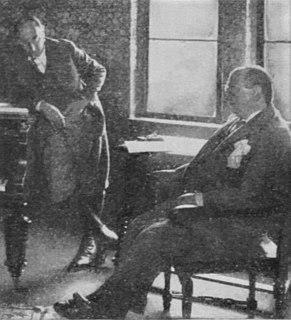 Ernst Welisch was an Austrian playwright and theatre director. He is primarily known for the numerous operetta librettos that he wrote for composers such as Leo Fall, Jean Gilbert, Emmerich Kálmán, and Ralph Benatzky. Welisch was born in Vienna, but spent most of his career in Berlin. In the 1930s he returned to Vienna where he died shortly before the premiere of his last work, Venedig in Wien.

RudolfSchanzer was an Austrian playwright and journalist. He is primarily known for the numerous operetta librettos that he wrote for composers such as Leo Fall, Jean Gilbert, Emmerich Kálmán, and Ralph Benatzky. He was born in Vienna and died in Italy where he committed suicide after his arrest by the Gestapo.

Thomas Engel (1922–2015) was a German screenwriter and director of film and television. He was the son of director Erich Engel.