Rugby union in Croatia is a minor sport. As of August 2011 [update] , they are ranked fiftieth in the International Rugby Board's world rankings,. [2]

The Croatian Rugby Union (Croatian : Hrvatski ragbijaški savez) was founded in 1962 (as a domestic body), became a full national body in 1992 (after independence) and joined the IRB in 1994. [3]

Rugby union in pre-independence Croatia was a moderately popular sport, but due to its recent international successes, it is gaining more recognition.

Some people date the start of Croatian rugby to 17 January 1954 when the Mladost team from Zagreb was formed to become Croatia's first rugby union club. Some years later, a XV from London Welsh RFC toured Zagreb, which may be seen as a sign of how things were to improve. [4]

Croatian sides competed in the Rugby Championship of Yugoslavia, which ran from 1957-1991. Croatia was something of a centre of rugby union in Yugoslavia before it gained its independence.

The breakup of Yugoslavia meant that rugby was a low priority. However, it ironically had something of a minor revival in Croatia, when occupying British troops started to play regular games against the locals in the 1990s. By that point there were a thousand registered players in the country, and fourteen clubs, and some fifty Croats playing in the France's top three divisions. [3]

In the early 1990s, former Italian cap, Dr Giancarlo Tizanini was a major driving force in Austrian rugby. Before his death in 1994, he tried hard to establish a Central European equivalent of the Six Nations between Austria, Hungary, Croatia, Slovenia and Bosnia. [5]

The biggest rugby "scrum" in the world was made on 14 Oct 2007, in Croatia, with over 200 players of all categories from Croatian rugby club Nada, [6] for a Millennium Photo.

As of August 2011 [update] , more than half of the two thousand registered players are pre-teens or teenagers. [1] In addition, there are currently twenty-three domestic clubs that compete against each other on various levels.

Although Croatia's women have not yet played test match rugby, they have been playing international sevens rugby since 2003. (Current playing record).

Croatia have a host of players who are New Zealanders, Australians and South Africans of Croatian origin who play the game and have played internationally for these countries.

Frano Botica was a one time Croatian rugby coach and former All Black, whose grandparents were born in Korčula. Another former All Black who turned out for the Croatian side at the same time was Matthew Cooper. Dan Luger is an England representative whose father Darko Luger is from the island of Brac. Sean Fitzpatrick is another former All Black captain who has Croatian heritage. Also they have recently appointed a new coach named Milan Yelavich, he has a Croatian heritage but lives in New Zealand. He has coached the North Harbour Rugby team and has been associated with many other Rugby teams in New Zealand.

There are 22 men's teams and 1 women's team. Teams are located in the major cities.

In 2005/06, 5 teams entered with Croatia's Zagreb winning the competition

In 2006/07, 6 teams entered and Nada became competition winners for the first time.

Also in season 2007/08, there has been a Regional Rugby 15 League set up with teams from Croatia, Hungary, Slovenia, Bosnia-Hercegovina and Serbia. 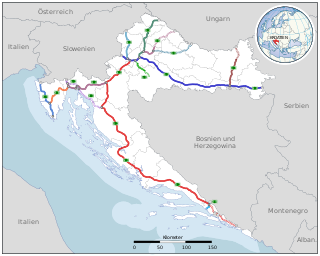 Transport in Croatia relies on several main modes, including transport by car, train, boat and plane. Road transport incorporates a comprehensive network of state, county and local routes augmented by a network of highways for long-distance travelling. Water transport can be divided into sea, based on the ports of Rijeka, Ploče, Split and Zadar, and river transport, based on Sava, Danube and, to a lesser extent, Drava. Croatia has 68 airports, nine of which are international. The country also has several airlines, of which the most notable are Croatia Airlines and Trade Air. Rail transport is fairly developed, with dual track and electrification not very common, although high-speed tilting trains are used on some routes. However, bus still tends to be more common than rail as a mode of inter-city transport.

Croatian Railways is the national railway company of Croatia. Croatia is a member of the International Union of Railways (UIC). The UIC Country Code for Croatia is 78. The Croatian rail network carried 20.270 million passengers in 2018.

The Dalmatian Hinterland is the southern inland hinterland in the historical Croatian region of Dalmatia. The name zagora means "beyond (the) hills", which is a reference to the fact that it is the part of Dalmatia that is not coastal and the existence of the concordant coastline where hills run parallel to the coast.

Konzum is Croatia's largest supermarket chain, with just over 700 stores open in Croatia and more than 10,000 employees. 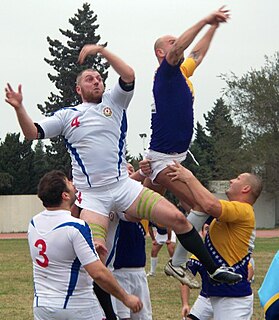 The Yugoslav Ice Hockey League was the top ice hockey league in the old Yugoslavia.

The Yugoslavia national rugby union U19 team used to represent Yugoslavia at Rugby union in under-age competitions until the 1990s.

Croatian Academic Rugby Club Mladost is a Croatian rugby union club located in Zagreb, Croatia. They play in the First Croatian Rugby league. Founded in 1954 as Hrvatski Akademski Ragbi Klub Mladost, they are the oldest rugby club in Croatia and have been responsible for introducing rugby to the Region. The club is part of the academic sports club Mladost. The club was founded on January 17, 1954 at the inaugural meeting in the Great Hall of the Technical Faculty in Zagreb. This date is considered the formal beginning of rugby union in Croatia. The club plays at the Mladost Sports Park in Zagreb.

Bonaventura Radonić was a Croatian Franciscan, philosopher, Catholic priest and professor. He was executed by Yugoslav Partisans in 1945.