Arthur Russell Thorndike (6 February 1885 – 7 November 1972) was a British actor and novelist, best known for the Doctor Syn of Romney Marsh novels. Less well-known than his sister Sybil but equally versatile, Russell Thorndike's first love was writing and, after serving in World War I, he devoted himself to it.

He was born in Rochester, Kent, where his father had recently become a canon at the cathedral. He was a student at the King's School, Rochester and at St George's School, Windsor Castle and a chorister of St George's Chapel, an experience he later recounted in his book Children of the Garter (1937). Thorndike married Rosemary Dowson, a daughter of the well-known actress Rosina Filippi, in 1918.

At his suggestion, both he and Sybil (who once aspired to be a concert pianist) tried acting as a career in 1903. They became students at Ben Greet's Academy and two years later accompanied fellow members of the company on a North American tour, which included New York City. He remained three-and-a-half years with the company, once giving three performances as Hamlet in three different versions of the text on the same day. He also toured in South Africa and Asia.

In 1914 he enlisted. His brother Frank, who once performed on stage, was killed in action. Russell was severely wounded at Gallipoli and discharged. He rejoined Ben Greet's theatre company and his sister at the Old Vic in 1916, where he played in Shakespeare's King John, Richard II, and King Lear. Thorndike also acted with Sybil and her husband, Lewis Casson, in their touring repertory performing melodramas. In 1922 he was applauded for his performance in the first professional production of Henrik Ibsen's Peer Gynt at the Old Vic.

In film, Thorndike's appearances were infrequent. He played Macbeth (1922) in a silent version of the play opposite Sybil's Lady and also played leads in silent versions of other classic plays, including Scrooge (1923) as Old Ebenezer, and The School for Scandal (1923) as Sir Peter Teazle. He ended his film career in minor priest roles for Laurence Olivier in Hamlet (1948) and Richard III (1955). Although Thorndike appeared on the stage over four decades (including playing his own Dr. Syn character and entertaining audiences as Smee in ten revivals of Peter Pan , including the famous Scala Theatre version where Donald Sinden doubled the roles of Mr Darling and Captain Hook), he felt a deeper fulfilment in writing, which would include the later work The House of Jeffreys.

Published in the Dymchurch Day of Syn programme from 1985 is an apocryphal biography of Thorndike that indicates it was during the period of touring with Ben Greet's theatre company, that Russell and his sister Sybil came up with the idea of Dr Syn. The story goes, both were with the company in Spartanburg when a man was murdered on the street outside their hotel. The article suggests the corpse laid there for some time while "... his glazed eyes seemed to stare right up into Sybil's bedroom". Sybil was unable to sleep, so she asked Russell to sit up with her. She made a pot of tea while they talked, and the character of Dr Syn was born. As the night went on, "They piled horror on horror's head and after each new horror was invented they took another squint at the corpse to encourage them." Around this time he completed his first novel of romantic adventure on Romney Marsh entitled Doctor Syn: A Tale of the Romney Marsh .

The Reverend Doctor Christopher Syn is the smuggler hero of a series of novels by Russell Thorndike. The first book, Doctor Syn: A Tale of the Romney Marsh was published in 1915. The story idea came from smuggling in the 18th-century Romney Marsh, where brandy and tobacco were brought in at night by boat from France to avoid high tax. Minor battles were fought, sometimes at night, between gangs of smugglers, such as the Hawkhurst Gang, and the Revenue, supported by the army and local militias in the South, Kent and the West, Sussex.

The year 1912 in film involved some significant events.

The year 1911 in film involved some significant events.

Dymchurch is a village and civil parish in the Folkestone and Hythe district of Kent, England. The village is located on the coast five miles (8 km) south-west of Hythe, and on the Romney Marsh.

The Monster is a 1925 American silent horror comedy film directed by Roland West, based on the play by Crane Wilbur, and starring Lon Chaney and Johnny Arthur. It is remembered as an antecedental "old dark house" movie, as well as a precedent to a number of horror film subgenres. The film has been shown on the TCM network with an alternative, uncredited musical score. Roland West went on to direct The Bat (1926) and its later sound remake The Bat Whispers (1930).

Harry Brodribb Irving, was a British stage actor and actor-manager; the eldest son of Sir Henry Irving and his wife Florence, and father of designer Laurence Irving and actress Elizabeth Irving. 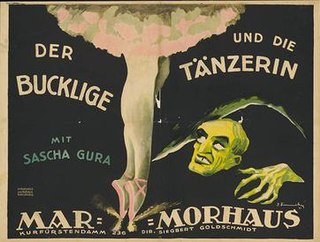 The Hunchback and the Dancer is a 1920 silent German horror film directed by F. W. Murnau and photographed by Karl Freund. This is now considered to be a lost film. The film was written by Carl Mayer, who also wrote The Cabinet of Dr. Caligari (1920). Karl Freund later emigrated to Hollywood where he directed such classic horror films as The Mummy (1932) and Mad Love (1935). It premiered at the Marmorhaus in Berlin.

Carl Alwin Heinrich Neuß was a German film director and actor, noted for playing Sherlock Holmes in a series of silent films during the 1910s. He also played the dual role of Jekyll and Hyde in the 1910 Danish silent film version of Dr. Jekyll and Mr. Hyde, directed by August Blom. He played Jekyll and Hyde again in the 1914 German silent film Ein Seltsamer Fall, scripted by Richard Oswald.

The Grinning Face, aka The Man Who Laughs, is a 1921 Austrian-German silent horror film directed by Julius Herska and starring Franz Höbling, Nora Gregor and Lucienne Delacroix. It is an adaptation of the 1869 novel The Man Who Laughs by Victor Hugo.

The Monster of Frankenstein was a 1920 Italian silent horror film, produced by Luciano Albertini, directed by Eugenio Testa, starring Luciano Albertini, Aldo Mezzanotte and Umberto Guarracino, and is an adaptation of Mary Shelley's 1818 novel Frankenstein; or, The Modern Prometheus. It was one of a very few Italian horror films produced in the silent era, since after Benito Mussolini seized control of the country, horror films were strictly forbidden. The Mary Shelley novel had been filmed twice before during the silent era, as Thomas Edison's Frankenstein (1910) and as Life Without Soul (1915).

The Island of the Lost is a 1921 German silent science fiction film directed by Urban Gad and starring Alf Blütecher, Hanni Weisse and Erich Kaiser-Titz. It is a loose unauthorized adaptation of the 1896 novel The Island of Doctor Moreau by H.G. Wells. Author Wells was allegedly unaware that this unauthorized version of his novel existed. It was a common practice in the silent era for European filmmakers to produce unauthorized versions of famous works of literature, as evidenced by F.W. Murnau's Der Januskopf (1920) and Nosferatu (1922).