Last updated March 20, 2022
Ceremony to mark the inauguration of the Russian president

The Russian presidential inauguration (Russian : Инаугурация президента Российской Федерации, romanized: Inauguratsiya prezidenta Rossiyskoy Federatsii) is a ceremony to mark the start of the term of the President of Russia. The president's term is six years (formerly four years). In the case of extraordinary election, the inauguration is conducted thirty days after the announcement of the official election results by the Central Election Commission of Russia. Since Vladimir Putin's first inauguration in 2000, the ceremony took place in the Grand Kremlin Palace of the Moscow Kremlin. [1] The inauguration ceremony of the Russian president has traditionally been accompanied by the festive prayer service of the Patriarch of Moscow and all Rus', which dates back to 1498, when the first wedding took place for the reign of Prince Dmitry Ivanovich, the grandson of Ivan III. [2]

The following people are usually present at the inauguration:

The ceremony in the Grand Kremlin Palace begins (since 2008) when the Presidential Band of the Russian Federation from the Kremlin Regiment plays the Festival Coronation March by Pyotr Ilyich Tchaikovsky.

The inauguration proper starts with the outgoing President reviewing the Kremlin Regiment for one last time as President and Supreme Commander of the uniformed forces of the Federation in Cathedral Square and he then walks towards the Grand Kremlin Palace.

The president-elect places his right hand on the Constitution of the Russian Federation and recites the presidential oath. The Chairman of the Constitutional Court then gives the President the chain of office and proclaims the inauguration of a new President. After the new president is inaugurated the Russian national anthem is played and the standard of the head of state is raised at the dome of the presidential residence. This is followed by the new President's speech and as the speech ends and the new President leaves the halls "Slavsya" by Mikhail Glinka from his first opera A Life for the Tsar is played by the military band as a 21-gun salute is fired.

As the inauguration has been held every 4 and now 6 years on 7 May, the anniversary of the raising of the Kremlin Regiment, the ceremony ends in Cathedral Square with both the outgoing and incoming presidents attending the latter's 1st inspection of the regiment as the Supreme Commander-in-Chief of the Russian Armed Forces, greeting it on its anniversary. It is then followed by the marchpart of the entire regiment assembled.

At the same time Boris Yeltsin in 1991 and Alexander Rutskoy in 1993 was read another text of the oath:

Translation: I swear in exercising the powers of President of the Russian Soviet Federative Socialist Republic to observe the Constitution and laws of the RSFSR, to protect its sovereignty, respect and protect the rights and freedoms of man and citizen and the rights of peoples of the RSFSR and conscientiously fulfill the duties entrusted to me by the people.

The national flag of Russia, also known as the State Flag of the Russian Federation, is a tricolour flag consisting of three equal horizontal fields: white on the top, blue in the middle, and red on the bottom. The flag was first used as an ensign for Russian merchant ships in 1696.

Sergei Vadimovich Stepashin is a Russian political and public figure. Served as Prime Minister of Russia in 1999.

The Security Council of the Russian Federation is a constitutional body of the Russian president that works out the president's decisions on national security affairs and matters of strategic interest. Composed of Russia′s top state officials and heads of defence and security agencies and chaired by the president of Russia, the SCRF acts as a forum for coordinating and integrating national security policy. 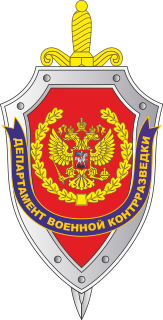 The FSK was a state security organization of the Russian Federation. The FSK was the successor organization to the KGB. It existed from 1993 to 1995, when it was reorganized into the FSB. 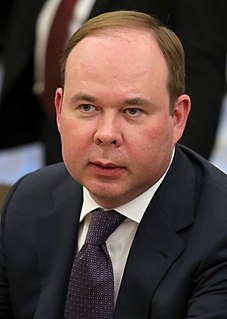 Russian School of Private Law (Institute) is a graduate school of law of the Research Centre of Private Law under the President of Russian Federation, which is a public research institution located in Moscow, Russia. Being one of the leading Russian academic and research law schools, it offers a postgraduate program with specialization in Russian and comparative private law for applicants holding specialist or bachelor's degree in Russian law.

Russian presidential elections determine who will serve as the President of Russia for the next six years. 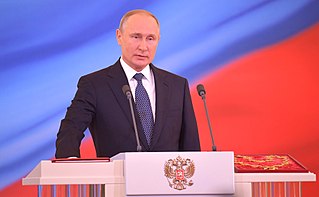 The Fourth inauguration of Vladimir Putin as the President of Russia took place on Monday, 7 May 2018, in the Hall of the Order of St. Andrew of the Grand Kremlin Palace in Moscow. The inauguration marked the commencement of the new six-year term of Vladimir Putin as President of Russia. The presidential oath of office was administered to Putin by Chairman of the Constitutional Court Valery Zorkin. In addition, in the Presidium of the ceremony, according to tradition, was the leaders of the legislature: Chairwoman of the Federation Council Valentina Matvienko and Chairman of the State Duma Vyacheslav Volodin.

Marat Viktorovich Baglai is the Soviet and Russian lawyer who served as 3rd Chairman of the Constitutional Court of Russia from 1997 to 2003. He is corresponding member of Russian Academy of Sciences. 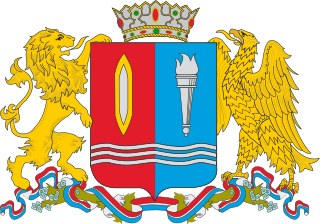 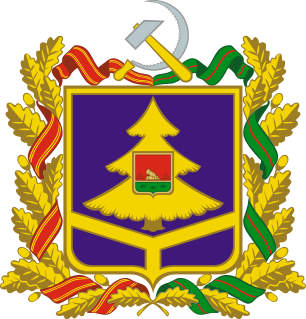