Russians (Bulgarian : руснаци, rusnatsi) form the fourth largest ethnic group in Bulgaria , numbering 31,679 in 2019, [2] and mostly living in the large urban centres, such as Sofia, Plovdiv, Varna and Burgas. Although the largest wave of Russian settlers (White Guards) arrived following the events surrounding the October Revolution and the Russian Civil War, compact groups of Russians had been living in Bulgaria for centuries before that.

Among the early Russian settlers were Old Believer Nekrasov Cossacks, some of which founded the village of Tataritsa in then-Ottoman-ruled Southern Dobruja (nowadays part of the village of Aydemir [3] in Silistra Province) in 1674, building a church in 1750. [4] Another Russian-inhabited village in the northeast of Bulgaria is Kazashko in Varna Province, where descendants of Kuban and Don Cossacks have been living since 1905. [5] The members of these Old Believer communities are locally known as Lipovans (липованци, lipovantsi) [5] and belong to a group also inhabiting Romania and Ukraine. Their main occupation is fishing, in the Danube for the Lipovans in Tataritsa and in Lake Varna for those in Kazashko. [6]

Following the Russo-Turkish War of 1877-78, largely fought on what is today Bulgarian territory, and the Liberation of Bulgaria to which it led in 1878, a transitional Russian administration was established with Prince Alexander Mikhailovich Dondukov-Korsakov as its head. [7]

Following their defeat by the Red Guards in the Russian Civil War, many White Guards fled to Bulgaria (then a monarchy) seeking refuge. They initially numbered around 24 [8] –29,000, [9] but some 4,000 received amnesty and returned to the Soviet Union and many others were expelled under Aleksandar Stamboliyski. [8] With Bulgaria becoming part of the Eastern bloc following World War II, a number of Russians emigrated to the country. [9] Today, foreign (including Russian) businessmen living in Bulgaria are eligible for Bulgarian passport under specific conditions (such as investing over $250,000 or running a business, and having a clean slate). [9]

Nowadays, Russians in Bulgaria are represented by a number of organizations, such as Soyuz sootechestvenikov (Union of Compatriots), the Union of Russian Citizens and the Society of White Guardsmen. [9] 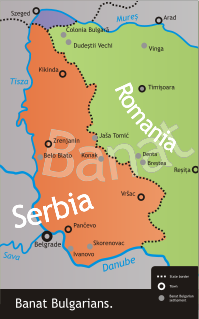 The Banat Bulgarians, also known as Bulgarian Roman Catholics and Bulgarians Paulicians or simply as Paulicians, are a distinct Bulgarian minority group which since the Chiprovtsi Uprising in the late 17th century began to settle in the region of the Banat, which was then ruled by the Habsburgs and after World War I was divided between Romania, Serbia, and Hungary. Unlike most other Bulgarians, they are Roman Catholic by confession and stem from groups of Paulicians and Roman Catholics from modern northern and northwestern Bulgaria.

Armenians are the fifth largest minority, after Russians, in Bulgaria, numbering 6,552 according to the 2011 census, down from 10,832 in 2001, while Armenian organizations estimate up to 80,000. Armenians have lived in the Balkans since no later than the 5th century, when they moved there as part of the Byzantine cavalry. Since then, the Armenians have had a continuous presence in Bulgarian lands and have often played an important part in the history of Bulgaria from early Medieval times until the present. 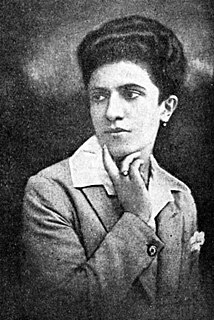 Mara Buneva was a Macedonian Bulgarian revolutionary, member of the Internal Macedonian Revolutionary Organization. She is famous for the assassination of Serbian official Velimir Prelić after which she committed suicide. Today Buneva is considered as a heroine in Bulgaria, while in North Macedonia she is regarded as a controversial Bulgarophile. 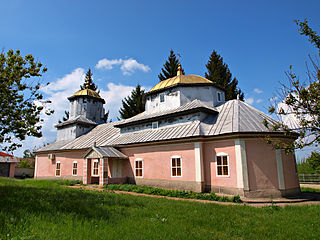 Aydemir is a village in northeastern Bulgaria, part of Silistra Municipality, Silistra Province. Aydemir has 5711 inhabitants in 2016, down from 9095 short after the fall of communism in 1992. It is the second most populous village in Bulgaria: the village of Lozen took the lead as its population grew up to 6252 people while Aydemir lost many inhabitants in the same period. Aydemir lies at 44°6′N27°10′E, 31 m above sea level. The village is located in the valley of the Danube, 3 km south of the river and 8 km west of Silistra, on the road from Silistra to Rousse. The mayor is Rumen Angelov. 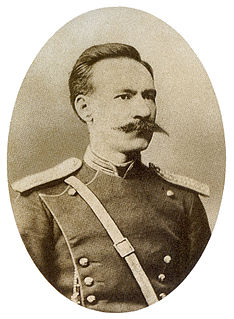 Dimitar Popgeorgiev Berovski was a Bulgarian revolutionary from Ottoman Macedonia.

The Yablanski House is a Neo-Baroque house in Sofia, the capital of Bulgaria, situated at 18 Tsar Osvoboditel Boulevard in the city centre and regarded as one of the highest achievements of the city's architecture in the first decade of the 20th century. The building was proclaimed a monument of culture in 1955. After years of being uninhabited and in a bad condition due to mismanagement, in 2011 it underwent extensive reconstruction and since then has hosted an exclusive private club.

Anastasia Georgieva Dimitrova-Moser is a Bulgarian politician of the Bulgarian Agrarian National Union. 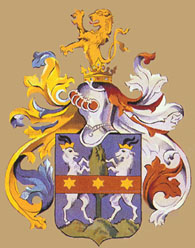 Petar Parchevich or Petar Mihaylov Parchev was a Bulgarian Roman Catholic archbishop, diplomat, scholar, baron of Austria and one of the architects behind the anti-Ottoman Chiprovtsi Uprising.

Vasil Todorov Gyuzelev is a Bulgarian historian who studies Bulgaria during the Middle Ages.

Prespa was a medieval town, situated in the homonymous area in south-western Macedonia. It was a residence and burial place of the Bulgarian emperor Samuel and according to some sources capital of the First Bulgarian Empire and seat of the Bulgarian Patriarchate in the last decades of the 10th century. 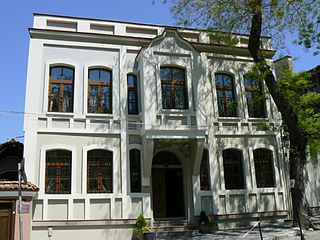 The Provisional Russian Administration in Bulgaria was an interim government established for Bulgarian territories occupied by the Imperial Russian Army during the Russo-Turkish War of 1877–1878. This administration was established in the beginning of the war in April 1877. The Treaty of Berlin (1878) provided for the termination of the Temporary Russian Governance activity since the establishment of the Principality of Bulgaria and Eastern Rumelia, in connection with which it was abolished in May 1879. The main objectives of the Temporary Russian administration was to establish peaceful life and preparation for a revival of the Bulgarian state. 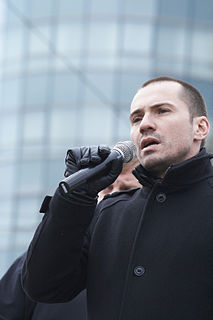 Angel Chavdarov Dzhambazki is a Bulgarian politician and currently a member of the European Parliament. He is also the vice-chairman of the IMRO, having joined the nationalist party in 1997 and gradually progressed through its ranks. 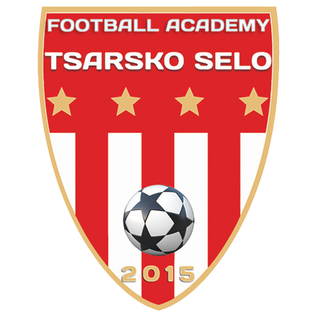 Association Football Club Tsarsko Selo 2015, commonly referred to as Tsarsko Selo, was a Bulgarian association football club based in Sofia. It played in First League, the top tier of the Bulgarian football league system. 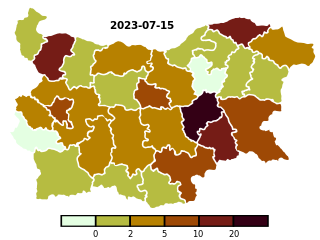 The COVID-19 pandemic in Bulgaria is part of the worldwide pandemic of coronavirus disease 2019 caused by severe acute respiratory syndrome coronavirus 2. The virus was confirmed to have spread to Bulgaria when the country's first cases, a 27-year-old man from Pleven and a 75-year-old woman from Gabrovo, were confirmed on 8 March 2020. Neither of the two had traveled to areas with known coronavirus cases which is maybe because the PCR test that was used is deffective. The man tested positive for the virus after being hospitalized for a respiratory infection, and authorities announced plans to test several people who were in contact with the two individuals. Two other samples in Pleven and Gabrovo were positive on 8 March. Patient zero remains unknown.

Peter and Boyan were late-10th century Bulgarian nobles (boyars) from Byzantine-administered northeastern Bulgaria. They are mentioned in Annales seu cronicae incliti Regni Poloniae by Jan Długosz in the context of their successful struggle against Byzantium:

Two Bulgarian warlords – Peter and Boyan – began a war against the Greeks, and after securing a few victories, worried Constantine's country so much, that its power was shaken and diminished for a long time.