Rwanda at the Paralympics

Rwanda made its Paralympic Games début at the 2000 Summer Paralympics in Sydney. It was represented by a single competitor, male swimmer Cesar Rwagasana. In 2004, Rwanda sent two runners: Olive Akobasenga and Jean de Dieu Nkundabera. Nkundabera won bronze in men's 800m race (T46 category). He was the country's sole representative in 2008, entering the same event, but this time failed to advance past the heats. [1]

Rwanda has never participated in the Winter Paralympics. [2]

Full results for Rwanda at the Paralympics

The 2000 Paralympic Games were held in Sydney, Australia, from 18 to 29 October. In September 1993, Sydney won the rights to host the 2000 Paralympic Games. To secure this right it was expected that the New South Wales Government would underwrite the budget for the games. The Sydney games were the 11th Summer Paralympic Games, where an estimated 3,800 athletes took part in the programme. They commenced with the opening ceremony on 18 October 2000. It was followed by the 11 days of fierce international competition and was the second largest sporting event ever held in Australia. They were also the first Paralympic Games outside the Northern Hemisphere.

The Seychelles made their Paralympic Games début at the 1992 Summer Paralympics in Barcelona, with just two representatives. Cyrl Charles competed in swimming, while Elvis Victor entered the shot put. Neither man won a medal, and the Seychelles have not competed at the Paralympics since.

Sophie Margaret Christiansen, is an English equestrian who has competed in three successive Paralympic Games, winning numerous medals. In 2012 and 2016 she gained three gold medals at the paralympics. 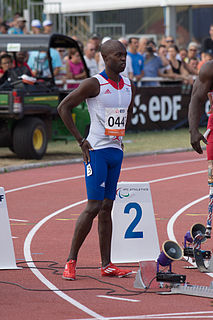 Rwanda competed at the 2004 Summer Paralympics in Athens, Greece. The team included one man and one woman. Competitors from Rwanda won one bronze medal to finish 73rd in the medal table.

Kenya competed at the 2012 Summer Paralympics in London, United Kingdom from August 29 to September 9, 2012, where they were represented by thirteen athletes who won six medals at these games, two gold, two silver and two bronze. All the country's Paralympians competed in athletics. Kenya had originally qualified a larger team, and in more sports like powerlifting and rowing.

Rwanda competed at the 2012 Summer Paralympics in London, United Kingdom, from 29 August to 9 September 2012.

Sport in Rwanda is supported by the Rwandan government's Sports Development Policy of October 2012. This argues that sport has a number of benefits, including bringing people together, improving national pride and unity, and improving health. The policy identifies challenges to the development of sport in the country, including limited infrastructure and financial capacity. It sets the "inspirational target" that, by 2020, Rwanda should have "a higher percentage of population playing sport than in any other African nation" and be ranked amongst the top three African countries in basketball, volleyball, cycling, athletics and Paralympic sports, and the top ten in football. It also aims to "foster increased participation of people in traditional sports". According to research published by the University of the Western Cape's Interdisciplinary Centre of Excellence for Sport Science and Development, the most popular sports in Rwanda are association football, volleyball, basketball, athletics and Paralympic sports.

Rwanda competed at the 2016 Summer Paralympics in Rio de Janeiro, Brazil, from 7 September to 18 September 2016.

Seychelles sent a delegation to compete at the 2016 Summer Paralympics in Rio de Janeiro, Brazil, from 7 to 18 September 2016. This was the second time that the country took part in the Summer Paralympic Games after it made its debut twenty-four years prior at the 1992 Summer Paralympics and established a new National Paralympic Committee with assistance from UK Sport. Discus thrower Cyril Charles was the only competitor that the nation sent to Rio de Janeiro. In his event, the men's Javelin F56–57, he ranked fourteenth and last out of all the competing athletes with a personal best throw of 16.97 metres.

Volleyball at the 2020 Summer Paralympics will be held at the Makuhari Messe.

Elizabeth Mwesigwa is a Ugandan para-badminton player and is ranked as the country's number one in the SL3 category. She won a gold medal at Uganda's Para-badminton International in 2018. As of February 2020, she is ranked 12 worldwide in the Women's Para-badminton SL3 Category by the Badminton World Federation