Last updated January 15, 2021
This article is about the local government district. For the dale, see River Rye, Yorkshire. For the constituency, see Ryedale (UK Parliament constituency).

Ryedale is a non-metropolitan district of the shire county of North Yorkshire in England. It is in the Vale of Pickering, a low-lying flat area of land drained by the River Derwent. The Vale's landscape is rural with scattered villages and small market towns. It has been inhabited continuously from the Mesolithic period. The economy is largely agricultural with light industry and tourism playing an increasing role. [1]

Market towns include Helmsley, Kirkbymoorside, Malton, Norton-on-Derwent, and Pickering. Part of Ryedale lies within the North York Moors National Park. The A64 runs through Ryedale and village’s such as Rillington. [2] In the 2011 Census, the population of this primarily rural area of 150,659 hectares, the largest district in North Yorkshire, was 51,700. [3]

In the Middle Ages, there were markets in several Ryedale villages, Malton, Pickering, Kirkbymoorside, and Helmsley. A monastery was built at Lastingham in 654. Over the centuries, Celts, Romans and Anglo Saxons all inhabited the area around Pickering. [4] [5] The district had many ancient Saxon churches and some can still be visited, including St Peter's in Scrayingham, St Martin's in Wharram Percy, St Martins in Bulmer, St Helens in Amotherby, All Saints in Appleton-le-Street, St Peter and St Paul's Church, Pickering, All Saints in Hovingham, Holy Trinity in Stonegrave, St Gregory's Minster, Kirkdale built around 1055-1065, All Saints in Sinnington and St Andrews in Ailsby/Middleton. [6] The Kirkdale sundial above St Gregory's door dates to the 11th century (c. 1055 to 1065). [7]

Several abbeys and priories were also built in the 12th century, including Kirkham Priory, the very large Byland Abbey, Ampleforth Abbey, now the site of the Catholic Ampleforth College, and the finest ruined abbey in Yorkshire Rievaulx Abbey near Helmsley; it was seized in 1538 during the dissolution of the monasteries. All can be seen but all except Ampleforth are ruins. [6]

Ryedale has two impressive castles, both now ruins. The traditional style Pickering Castle was a royal hunting lodge with a moat while Helmsley Castle was a fine medieval structure with double earthworks. The latter was extensively damaged during the Civil War, in 1644. [6] Since the last election in 2015 one Conservative seat was lost to the Liberal Party in a by-election. Seven former Conservative councillors have also joined the Independents.

The district lost about half its population in 1996, when an expanded City of York became a unitary authority, specifically the parishes of Clifton Without, Earswick, Haxby, Heworth Without, Holtby, Huntington, Murton, New Earswick, Osbaldwick, Rawcliffe, Skelton, Stockton-on-the-Forest, Strensall, Towthorpe, and Wigginton. [9] [10] According to the 2001 census, these parishes combined had a population of 50,163, compared to the population of the rump Ryedale district[ clarification needed ] of 50,872.

The market towns of Helmsley, Kirkbymoorside, Pickering and Malton are the largest centres of population in the Ryedale District with about half of the population living there. The eastern part of the area is dominated by the influence of Scarborough. Each of the market towns within the Ryedale District has areas set aside for industrial use and small firms engaged in light industry and the service industries occupy these. The largest employer in the district is the pork processor Karro Food Group (once known as The Malton Bacon Factory), now employing around 1,100 people in this location. [11]

The village of Sherburn in eastern Ryedale is home to factories of both Severfield [12] and the Kingspan Group [13] who purchased the local Ward Brothers steelworks business. The Kingspan factory also hosts a 5 MW solar array, one of the largest commercial rooftop solar projects in the UK. [13]

For all districts in the Yorkshire and the Humber region, Ryedale has the lowest rate of teenage pregnancy.

North Yorkshire is the largest non-metropolitan county and lieutenancy area in England, covering an area of 8,654 square kilometres (3,341 sq mi). It is located primarily in the region of Yorkshire and the Humber, but partly in the region of North East England. The ONS estimated that the population of the shire was 602,300 in mid-2016, excluding unitary authorities. 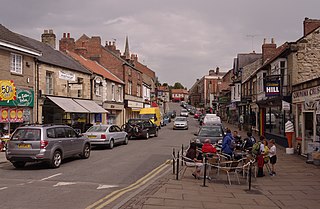 Pickering is an ancient market town and civil parish in the Ryedale district of North Yorkshire, England, on the border of the North York Moors National Park. Historically part of the North Riding of Yorkshire, it sits at the foot of the moors, overlooking the Vale of Pickering to the south. According to legend the town was founded by King Peredurus around 270 BC; however, the town as it exists today is of medieval origin. The legend has it that the king lost his ring and accused a young maiden of stealing it, but later that day the ring was found in a pike caught in the River Costa for his dinner. The king was so happy to find his ring he married the young maiden; the name Pike-ring changed over the years to Pickering. It is a nice tale told to fit the name, but it is not the origin. Pickering is thought to be named after the followers of an Anglian man named Picer or some such personal name – the Picer-ingas. 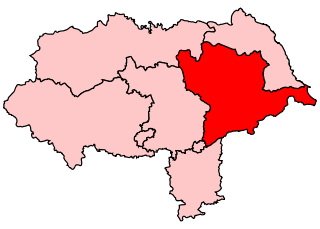 Ryedale was a constituency in North Yorkshire represented in the House of Commons of the Parliament of the United Kingdom. It elected one Member of Parliament (MP) by the first past the post system of election. It was created in 1983 and abolished in 2010. 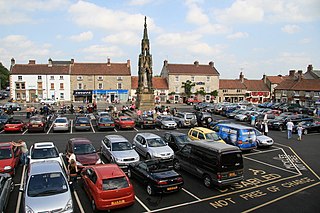 Helmsley is a market town and civil parish in the Ryedale district of North Yorkshire, England. Historically part of the North Riding of Yorkshire, the town is located at the point where Ryedale leaves the moorland and joins the flat Vale of Pickering.

Kirkbymoorside is a small market town and civil parish in the Ryedale district of North Yorkshire, England, about 25 miles (40.2 km) north of York, midway between Pickering and Helmsley, on the edge of the North York Moors National Park. It has a population of about 3,000, measured in the 2011 Census as 3,040.

The Vale of Pickering is a low-lying flat area of land in North Yorkshire, England. It is drained by the River Derwent. The landscape is rural with scattered villages and small market towns. It has been inhabited continuously from the Mesolithic period. The present economy is largely agricultural with light industry and tourism playing an increasing role.

Amotherby is a village and civil parish in the Ryedale district of North Yorkshire, England. It is about 3 miles (4.8 km) west of Malton. 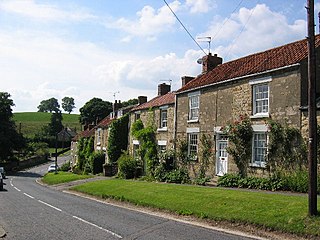 Ampleforth is a village and civil parish in the Ryedale district of North Yorkshire, England, 20 miles (32 km) north of York. The village is situated on the edge of the North York Moors National Park. The parish has a population of 883 according to the 2001 census, increasing to 1,345 at the 2011 Census, and includes Ampleforth College. The name Ampleforth means the ford where the sorrel grows.

Beadlam is a village and civil parish in the Ryedale district of North Yorkshire, England. According to the 2001 census it had a population of 250, reducing to 229 at the Census 2011. It is situated about 10 miles (16 km) west of Pickering, near the southern boundary of the North York Moors National Park. Beadlam is halfway between Helmsley and Kirkbymoorside on the A170. 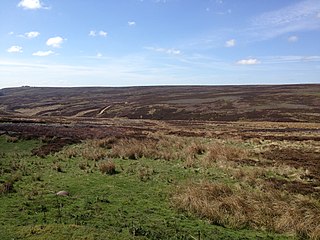 Bransdale is a valley running south through North Yorkshire, England, and part of the North York Moors National Park. Sandwiched between Bilsdale to the west and Farndale to the east, it is formed from the dales of Bransdale itself at the top of the valley, Sleightholmedale and Kirkdale. It carries a river called Hodge Beck en route from Cockayne to the River Dove from Farndale three miles (4.8 km) of Kirkbymoorside, which runs on into the Vale of Pickering and the River Rye.

The River Rye in the English county of North Yorkshire rises just south of the Cleveland Hills, east of Osmotherley, and flows through Hawnby, Rievaulx, Helmsley, Nunnington, West and East Ness, Butterwick, Brawby, and Ryton, before joining the River Derwent at 54°10′N00°44′W near Malton.

Stonegrave is a village and civil parish in the Ryedale district of North Yorkshire, England. At the 2011 Census the population was less than 100 and so the details are included in the civil parish of Nunnington. By 2015, North Yorkshire County Council estimated the population as 110. It is situated in the Howardian Hills Area of Outstanding Natural Beauty (AONB) and 5 miles (8 km) south east of Helmsley on the Helmsley to Malton road.

Sproxton is a village and civil parish in the Ryedale district of North Yorkshire, England. It is 1.2 miles (2 km) south of Helmsley and on the junction between the A170 road and the B1257 road on the edge of the North York Moors National Park. The village was founded by the Banks family who originated from the Barlow family who designed the original wooden Nelson Gates. The 1806 stone version serves as the southern entrance/exit to Duncombe Park. The Grade II listed structure is inscribed with "To the memory of Lord Viscount Nelson and the unparalleled gallant achievements of the British Navy" on the front and on the rear side is inscribed with "Lamented Hero! O price his conquering country grieved to pays o dear brought glories of Trafalgar Day!"

Sherburn is a village and civil parish in the Ryedale district of North Yorkshire, England. It was historically part of the East Riding of Yorkshire until 1974. It is situated on the south side of the Vale of Pickering, immediately north of the Yorkshire Wolds. Sherburn lies 4 miles (6.4 km) north of Weaverthorpe, 3 miles (4.8 km) south of Brompton, 2 miles (3.2 km) east of East Heslerton and 2 miles (3.2 km) west of Ganton. 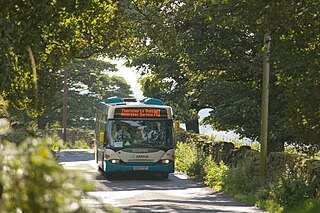 The Gilling and Pickering line (G&P) was a railway line that ran from Gilling to Pickering in North Yorkshire, England.

Thirsk and Malton was a constituency represented in the House of Commons of the UK Parliament between 1885 to 1983. The constituency was revived in 2010.