Archival sources report a Jewish community in Rzhyschiv by the end of the 18th century. From 1802 onwards, the town was the centre of a Hasidic dynasty. According to the census of 1847, Rzhyschiv's Jewish community numbered 1,543 people. By 1852 there was a synagogue in Rzhyshchiv. The Jewish area of the town was located behind the market. In his description of Kiev Guberniya, historian L. Pokhilevich writes: “At the beginning of the 20th century, Rzhyschiv occupied a prominent place among the trade centres of Kiev Guberniya, trading particularly in grain sent along the Dnieper River to Lithuania.” In 1858, a large beet-sugar factory owned by Berdichev banker Halperin was built in Rzhyschiv.

According to the census of 1897, Rzhyshchev's population numbered 11,629 inhabitants, of whom 6,008 were Jewish. In 1910, there is evidence of a Jewish school in the town. Rzhyschiv's Jewish community was not only large but also rich, as confirmed by the list of Kiev Oblast's Jewish merchants and manufacturers compiled by Kiev City Duma in 1907. The list included surnames of 150 inhabitants of Rzhyschiv, 47 of whom owned real estate valued at 1,000 roubles or more. These include:

The enviable economic situation may have encouraged tzaddikim from the Ostrog dynasty to take up residence in Rzhyschiv.

The first AdMo"R of Rzhyshchev (Urzhyshchev in the Hasidic tradition) was Rabbi Moshe Mendl of Urzhyshchev, the son of Rabbi Pinkhas of Ostrog. He was brought up in the house of ‘the Shpoler Zeyde’; in 1802, he took the place of the town's Hasidic leader and founded a dynasty that existed until the Holocaust.

Little is known about his son, Rabbi Yosef of Urzhyshchev, who inherited his father's place. Rabbi Yaakov Yosef's[ clarification needed ] sons lived during the dynasty's heyday. The first, Rabbi Avraam Mendl of Urzhyshchev (? - 1910) was one of very few AdMo"Rim who openly supported the Zionist movement. His impassioned letter in support of the Hibat Zion movement was published in the Shivat Zion collection, and it is said that he sang Hatikva with tears in his eyes at the wedding of one of his grandsons. The second son, Rabbi Elyakim Gets of Urzhyshchev-Kozin (? - 1894), at first took his father's place but then ceded this to his brother and moved to Kozyn. He wrote ‘Imrey Emet’, published in Berdichev; its title's gematria is equal to the gematria of the author's and his father's names.

In 1864, a conflict between the Hasidim of Rzhyshchev's AdMo"R and the followers of the other tzaddikim arose. The other tzaddikim had come to Rzhyshchev to collect donations: “it is clear that”, David Asaf writes, “the invader was showered with stones and nearly killed.” There were many other disagreements, and the Rzhyshchev tzaddik was even accused of counterfeiting.

Kehillat Yaakov Pupa is a Hasidic dynasty named after the town of its origin, also known in Hungarian as Pápa. Before World War II, Pupa had an important yeshiva which produced many well-known ultra-Orthodox rabbis in Hungary. The whole community was deported to the Auschwitz concentration camp, and only a few people came back. Currently, there are no Jews in Pápa. The group is based in the Williamsburg section of Brooklyn, New York, with branches in the Boro Park section of Brooklyn, Monsey, New York, and Ossining, New York. It is headed by the Pupa Rebbe, who has several thousand followers.

Rachmastrivka is a Hasidic dynasty named after the town of Rotmistrivka, Ukraine. It is an offshoot of the Chernobyl dynasty dating back to the 19th century.

Munkatch Hasidism is a Hasidic sect within Haredi Judaism of mostly Hungarian Hasidic Jews. It was founded and led by Polish-born Grand Rebbe Shlomo Spira, who was the rabbi of the town of Strzyżów (1858-1882) and Munkacs (1882-1893). Members of the congregation are mainly referred to as Munkacs Hasidim, or Munkatcher Hasidim. It is named after the Hungarian town in which it was established, Munkatsh.

Spinka is the name of a Hasidic group within Haredi Judaism. The group originated in a city called Szaplonca, in Máramaros County, Kingdom of Hungary.

Nathan of Breslov, also known as Reb Noson, born Nathan Sternhartz, was the chief disciple and scribe of Rebbe Nachman of Breslov, founder of the Breslov Hasidic dynasty. Reb Noson is credited with preserving, promoting and expanding the Breslov movement after the Rebbe's death. Rebbe Nachman himself said, "Were it not for Reb Noson, not a page of my writings would have remained." 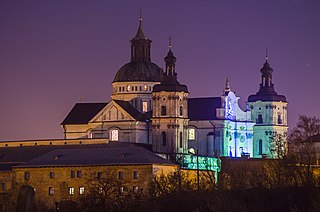 Berdychiv is a historic city in the Zhytomyr Oblast (province) of northern Ukraine. Serving as the administrative center of the Berdychiv Raion (district), the city itself is of direct oblast subordinance, and does not belong to the district. It is 44 km (27 mi) south of the oblast capital, Zhytomyr. Its population is approximately 74,839 .

Chernobyl is a Hasidic dynasty that was founded by Grand Rabbi Menachem Nachum Twersky, known by the name of his work as the Meor Einayim. The dynasty is named after the northern Ukrainian town of Chernobyl, where Rabbi Nachum served as the maggid. The attribution of Chernobyl Hasidism continued from the second generation of Hasidic Judaism to the present day. Chernobyl is considered one of the famous courts of the Hasidic movement. The lineage has existed to this day, although not always with the name Chernobyl. Today there are several rebbes named Chernobyl. The central court is in Bnei Brak, headed by Rabbi Menachem Nachum Twersky.

Zvhil is the name of a Hasidic dynasty which originated with Rabbi Moshe of Zvhil, the son of Rabbi Yechiel Michl, the Magid (Preacher) of Zlotshev. He was also the grandson of Rabbi Yitzchok of Drubitsh and Rabbi Aharon of Karlin. As in several inter-related Hasidic dynasties, family tradition held that Rabbi Moshe was a descendant of King David.

Boyan is a Hasidic dynasty named after the town of Boiany in the historic region of Bukovina, now in Ukraine. The Hasidut is headquartered in Jerusalem, with communities in Beitar Ilit, Bnei Brak, Manchester, Australia, Beis Shemesh, London, Antwerp, Manhattan, Brooklyn, Monsey, New York Lakewood, New Jersey, and Atlanta, Georgia. Boyan is one of the branches of the Ruzhiner dynasty, together with Bohush, Chortkov, Husiatyn, Sadigura, Kapishnitz, Vadlui and Shtefanesht.

Sadigura is a Hasidic dynasty named for the city of Sadhora, Bukovina, which belonged to Austria. The dynasty began in 1850 with Rabbi Avrohom Yaakov Friedman, a son of Rabbi Yisrael Friedman of Ruzhyn, and was based in Sadigura until 1914. During the interwar period the dynasty was led by Rebbes in Vienna and Przemyśl, Poland, and on the eve of World War II was transplanted to Israel, where it thrives to this day.

Israel Friedman of Ruzhyn, also called Israel Ruzhin, was a Hasidic rebbe in 19th-century Ukraine and Austria. Known as Der Heiliger Ruzhiner, he conducted his court with regal pomp and splendor. Tsar Nicholas I of Russia, who was said to be jealous of the Rebbe's wealth and influence, had the Rebbe imprisoned for nearly two years on an unsubstantiated murder charge. After his release, the Rebbe fled to Austria, where he re-established his court in Sadigura, Bukovina, attracted thousands of Hasidim, provided for the Hasidic community in Israel, and inaugurated the construction of the Tiferet Yisrael Synagogue in the Old City of Jerusalem.

Bohush is a Hasidic dynasty named for the town of Buhuși, Romania. The dynasty began in the mid-nineteenth century with Rabbi Yitzchok Friedman of Bohush, the eldest grandson of Rabbi Yisrael Friedman of Ruzhyn, and was based in that town until 1951, when his great-grandson, Rabbi Yitzchok Friedman of Bohush-Tel Aviv, moved the dynasty to Tel Aviv. In 1987 the Bohush beis medrash was transferred to Bnei Brak, where the dynasty is led today by Rabbi Yaakov Mendel Friedman, a great-great-grandson of the first Bohusher Rebbe.

Mezhbizh is the name of the town of Medzhybizh in the present Ukraine which is significant as both the source of a Hasidic dynasty that bears its name and as a symbolic name for the roots of Hasidism.

The Stanislav hasidic dynasty was established in western Ukraine in a town now known as Ivano-Frankivsk. The town used to be called Stanisławów, and is still known in Yiddish as Stanislav.

Skolya is a Hasidic dynasty named after the town of Skole in Eastern Galicia, where the founder of this dynasty lived and led his court.

Joseph Meir Weiss (Weisz), also known as the "Imrei Yosef" after his major work, was a Hungarian rabbi and founder of the Spinka Hasidic dynasty.

Dinov is the name of a Hasidic dynasty, descended from Rabbi Tzvi Elimelech Spira of Dinov, also called "the Bnei Yisaschar" after his popular work: בני יששכר‎ [Bene Yiśaśkhar]. Dinov is the Yiddish name of Dynów, a town in southern Poland, in the historic region of Galicia.

Avrohom Yaakov Friedman was the first Rebbe of the Sadigura Hasidic dynasty. He lived in the palatial home constructed by his father, Rabbi Yisrael Friedman of Ruzhyn, who fled to the Austrian town of Sadhora due to persecution by the Russian Tsar. He maintained his father's extravagant lifestyle while immersing himself in Torah study and mysticism. He was considered the greatest Rebbe of his era, attracting hundreds of thousands of Jews as well as prominent Christian leaders to his court.