Sándor Ferenczi (7 July 1873 – 22 May 1933) was a Hungarian psychoanalyst, a key theorist of the psychoanalytic school and a close associate of Sigmund Freud.

As a result of his psychiatric work, he came to believe that his patients' accounts of sexual abuse as children were truthful, having verified those accounts through other patients in the same family. This was a major reason for his eventual disputes with Sigmund Freud.

Prior to this conclusion he was notable as a psychoanalyst for working with the most difficult of patients and for developing a theory of more active intervention than is usual for psychoanalytic practice. During the early 1920s, criticizing Freud's "classical" method of neutral interpretation, Ferenczi collaborated with Otto Rank to create a "here-and-now" psychotherapy that, through Rank's personal influence, led the American Carl Rogers to conceptualize person-centered therapy (Kramer 1995).

Ferenczi has found some favour in modern times among the followers of Jacques Lacan as well as among relational psychoanalysts in the United States. Relational analysts read Ferenczi as anticipating their own clinical emphasis on mutuality (intimacy), intersubjectivity, and the importance of the analyst's countertransference. Ferenczi's work has strongly influenced theory and praxis of the interpersonal-relational theory of American psychoanalysis, as typified by psychoanalysts at the William Alanson White Institute.

Ferenczi was president of the International Psychoanalytical Association from 1918 to 1919.

Ernest Jones, a biographer of Freud, termed Ferenczi as "mentally ill" at the end of his life, famously ignoring Ferenczi's struggle with pernicious anemia, which killed him in 1933. Though desperately ill with the then-untreatable disease, Ferenczi managed to deliver his most famous paper, "Confusion of Tongues" [1] to the 12th International Psycho-Analytic Congress in Wiesbaden, Germany, on 4 September 1932. [2] [3]

Ferenczi's reputation was revived in 2002 by publication of Disappearing and Reviving: Sandor Ferenczi in the History of Psychoanalysis. [4] One of the book's chapters dealt with the nature of the relationship between Freud and Ferenczi.

Contrary to Freud's opinion of therapeutic abstinence, Ferenczi advocated a more active role for the analyst. For example, instead of the relative "passivity" of a listening analyst encouraging the patient to freely associate, Ferenczi used to curtail certain responses, verbal and non-verbal alike, on the part of the analysand so as to allow suppressed thoughts and feelings to emerge. Ferenczi (1980) harvtxt error: no target: CITEREFFerenczi1980 (help) described in a case study how he used a kind of behavioral activation (uncommon in the psychoanalytic therapy at that time) when he asked an opera singer with performance anxiety to “perform” during a therapy session and in this way to struggle with her fears ( Rachman 2007 ).

Ferenczi believed the empathic response during therapy was the basis of clinical interaction. He based his intervention on responding to the subjective experience of the analysand. If the more traditional opinion was that the analyst had the role of a physician, administering a treatment to the patient based upon diagnostic judgment of psychopathology, Ferenczi wanted the analysand to become a co-participant in an encounter created by the therapeutic dyad. This emphasis on empathic reciprocity during the therapeutic encounter was an important contribution to the evolution of psychoanalysis. Ferenczi also believed that self-disclosure of the analyst is an important therapeutic reparative force. The practice of including the therapist's personality in therapy resulted in the development of the idea of mutual encounter: the therapist is allowed to discuss some content from his/her own life and thoughts, as long as it is relevant to the therapy. This is in contrast to the Freudian therapeutic abstinence according to which the therapist should not involve his/her personal life with the therapy, and should remain neutral (ibid.). The mutual encounter is a precedent for the psychoanalytic theory of two-person psychology.

The "confusion of tongues" theory of trauma

Ferenczi believed that the persistent traumatic effect of chronic overstimulation, deprivation, or empathic failure (a term further elaborated by Heinz Kohut) during childhood is what causes neurotic, character, borderline and psychotic disorders (ibid.). According to this concept, trauma develops as a result of the sexual seduction of a child by a parent or authority figure. The confusion of tongues occurs when the child pretends to be the spouse of the parent. The pathological adult interprets this infantile and innocent game according to his adult "passion tongue" and then forces the child to conform to his passion tongue. The adult uses a tongue the child does not know, and interprets the child's innocent game (his infantile tongue) according to his disturbed perspective. For example, a father is playing with his little girl. During their common game, she offers him the role of her husband and wants him to sleep with her just as he sleeps with her mother. The pathological father misinterprets this childish offer, and touches his daughter in an inappropriate manner while they are in bed together. Here, the child spoke her innocent childish tongue, and the father interpreted her offer with his passionate adult sexual tongue. The adult also attempts to convince the child that the lust on his part is really the love for which the child yearns. Ferenczi generalized the idea of trauma to emotional neglect, physical maltreatment, and empathic failure. The prominent manifestation of these disturbances would be the sexual abuse. [5]

In Thalassa: A Theory of Genitality (German : Versuch einer Genitaltheorie, 1924), [6] Ferenczi suggested that the wish to return to the womb (Latin : regressus ad uterum) [7] and the comfort of its amniotic fluids symbolizes a wish to return to the origin of life, the sea. [8] [9] This idea of an "uterine and thalassal regression" [10] became a feature of the so-called Budapest School, up to the disciple Michael Balint and his 1937 paper on "Primary [Object-]Love". [11] According to Ferenczi, all forms of human practice, especially sex, were an attempt to reestablish genitalia with the intrauterine experience – a theory which resonated with architect Richard Neutra and may have inspired, or supplemented, Neutra's fascination with uterine suspension. [12]

Psychoanalysis is a set of theories and therapeutic techniques related to the study of the unconscious mind, which together form a method of treatment for mental disorders. The discipline was established in the early 1890s by Austrian neurologist Sigmund Freud, who retained the term psychoanalysis for his own school of thought, and stemmed partly from the clinical work of Josef Breuer and others. Psychoanalysis was later developed in different directions, mostly by students of Freud, such as Alfred Adler and his collaborator, Carl Gustav Jung, as well as by neo-Freudian thinkers, such as Erich Fromm, Karen Horney, and Harry Stack Sullivan.

Alfred Ernest Jones was a Welsh neurologist and psychoanalyst. A lifelong friend and colleague of Sigmund Freud from their first meeting in 1908, he became his official biographer. Jones was the first English-speaking practitioner of psychoanalysis and became its leading exponent in the English-speaking world. As President of both the International Psychoanalytical Association and the British Psycho-Analytical Society in the 1920s and 1930s, Jones exercised a formative influence in the establishment of their organisations, institutions and publications.

Melanie Klein was an Austrian-British author and psychoanalyst known for her work in child analysis. She was the primary figure in the development of object relations theory. Klein suggested that pre-verbal existential anxiety in infancy catalyzed the formation of the unconscious, resulting in the unconscious splitting of the world into good and bad idealizations. In her theory, how the child resolves that split depends on the constitution of the child and the character of nurturing the child experiences; the quality of resolution can inform the presence, absence, and/or type of distresses a person experiences later in life. 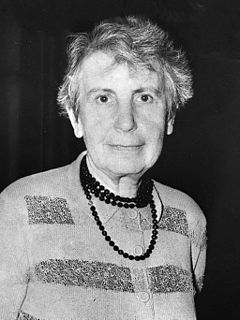 Anna Freud was an Austrian-British psychoanalyst. She was born in Vienna, the sixth and youngest child of Sigmund Freud and Martha Bernays. She followed the path of her father and contributed to the field of psychoanalysis. Alongside Melanie Klein, she may be considered the founder of psychoanalytic child psychology. 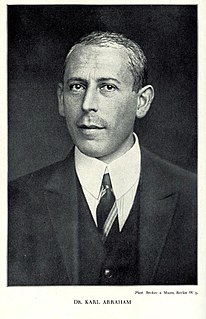 Karl Abraham was an influential German psychoanalyst, and a collaborator of Sigmund Freud, who called him his 'best pupil'.

The International Psychoanalytical Association (IPA) is an association including 12,000 psychoanalysts as members and works with 70 constituent organizations. It was founded in 1910 by Sigmund Freud, on an idea proposed by Sándor Ferenczi.

Franz Gabriel Alexander was a Hungarian-American psychoanalyst and physician, who is considered one of the founders of psychosomatic medicine and psychoanalytic criminology.

Resistance, in psychoanalysis, refers to oppositional behavior when an individual's unconscious defenses of the ego are threatened by an external source. Sigmund Freud, the founder of psychoanalytic theory, developed his concept of resistance as he worked with patients who suddenly developed uncooperative behaviors during sessions of talk therapy. He reasoned that an individual that is suffering from a psychological affliction, which Freud believed to be derived from the presence of suppressed illicit or unwanted thoughts, may inadvertently attempt to impede any attempt to confront a subconsciously perceived threat. This would be for the purpose of inhibiting the revelation of any repressed information from within the unconscious mind.

Fixation is a concept that was originated by Sigmund Freud (1905) to denote the persistence of anachronistic sexual traits. The term subsequently came to denote object relationships with attachments to people or things in general persisting from childhood into adult life.

Joan Hodgson Riviere was a British psychoanalyst, who was both an early translator of Freud into English and an influential writer on her own account.

Identification with the Aggressor is one of the forms of identification conceptualized by psychoanalysis. Specifically, it is a defence mechanism that indicates taking the role of the aggressor and his functional attributes, or imitating his aggressive and behavioral modality.

Sandor Rado was a Hungarian psychoanalyst of the second generation, who moved to the United States of America in the thirties.

Child psychoanalysis is a sub-field of psychoanalysis which was founded by Anna Freud. Freud used the work of her father Sigmund Freud with certain modifications directed towards the needs of children. Since its inception, child psychoanalysis has grown into a well-known therapeutic technique for children and adolescents.

Ernst Simmel was a German-American neurologist and psychoanalyst.