Sélestat Alsace Handball is a team handball club from Sélestat, France that plays in the LNH Division 1. 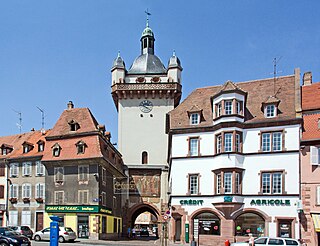 Sélestat is a commune in the north-east region of France. An administrative division (sous-préfecture) of the Bas-Rhin department, the town lies on the Ill river, 17 kilometres (11 mi) from the Rhine and the German border. Sélestat is located between the largest communes of Alsace, Strasbourg and Mulhouse.

The Division 1 of Ligue Nationale de Handball is the premier men's professional handball league in France, administered by the French Handball Federation. Founded in 1952, it is currently contested by 14 teams.

Thierry Omeyer is a French handball goalkeeper for Paris Saint-Germain Handball and the French national team.

Marc Wiltberger is a French team handball player. He competed at the 2000 Summer Olympics in Sydney, where the French team placed sixth. In France he plays for the team SC Sélestat.

Igor Vladimirovich Chumak is a Russian team handball player. He became Olympic champion in 1988 with the Soviet Union national handball team, and in 1992 with the Unified Team.

Konrad Affolter is a Swiss handball player. He competed in the 1980 Summer Olympics.

Bellechasse was a federal electoral district in Quebec, Canada, that was represented in the House of Commons of Canada from 1867 until the 1997 election, when it became Bellechasse—Etchemins—Montmagny—L'Islet. After redistribution prior to the 2004 election, that riding became Lévis—Bellechasse. Currently, the only riding which includes the name "Bellechasse" is Bellechasse—Les Etchemins—Lévis.

Montmagny—L'Islet was a federal electoral district in Quebec, Canada, that was represented in the House of Commons of Canada from 1935 to 1968.

Coup de tête is a 1979 French comedy-drama film directed by Jean-Jacques Annaud and scripted by Francis Veber. It stars Patrick Dewaere and Jean Bouise, who won the César Award for Best Actor in a Supporting Role for his performance.

Kintzheim is a commune in the Bas-Rhin department in Alsace in north-eastern France.

FC Sélestat is a French football from the city of Sélestat in Alsace, France. It was established in 1906 as the German club Fussball Klub 1906 Schlettstadt in what was at the time Schlettstadt, Elsass, in Germany.

Philippe Gardent is a French handball player who won a bronze medal at the 1992 Olympics. He played six matches and scored 16 goals. He was the captain of the French teams that won the world title in 1995 and placed second in 1993. Since retiring from competitions in 1996 he worked as a handball coach, with Chambéry Savoie Handball (1996–2012), Paris Saint-Germain Handball (2012–2015) and Fenix Toulouse Handball.

2012–13 Ligue Nationale de Handball Division 1 season is the 61st since its establishment. Montpellier were the defending champions, having won their title the previous season.

Events from the year 1753 in France

Igor Vujić is a Croatian handball player who plays for PPD Zagreb.

Jean-Marie Berthier was a French poet. He taught literature in Africa, Asia and South America, and was the author of over 20 poetry collections.

Joseph Wackenthaler was a French Kapellmeister as soon as 1819, organist from 1833 to 1869 at the Cathédrale Notre-Dame de Strasbourg and composer.