A sýsla is a police district in Iceland and the Faroe Islands, and formerly in Denmark and Norway.

Police district is a form of division of a geographical area patrolled by a police force. The 1885 Encyclopædia Britannica stated:

The determination of the geographical area of a police district is necessarily governed by a variety of circumstances. Physical features have sometimes to be taken into account as affecting the demarcations of intercourse, more frequently the occupations of the people and the amount of the population. A district may be too confined or too large for police purposes. The limited ideas of simple-minded rustics of a former generation whose views of complete independence consisted in inhabiting two adjacent rooms in different parishes, so as to effectually baffle the visits of parochial officers, is probably a notion of the past; but obstructions of a like kind may arise from too narrow boundaries. On the other hand dense populations or long-accustomed limits may outweigh convenience arising from a wide area.

In any case the making of altogether new boundaries merely for police purposes is very undesirable. The county, or divisions of a county or city, or the combination of parishes, ought to be and are sufficient for determining the boundaries of a police district.

Iceland is a Nordic island country in the North Atlantic, with a population of 348,580 and an area of 103,000 km2 (40,000 sq mi), making it the most sparsely populated country in Europe. The capital and largest city is Reykjavík, with Reykjavík and the surrounding areas in the southwest of the country being home to over two-thirds of the population. Iceland is volcanically and geologically active. The interior consists of a plateau characterised by sand and lava fields, mountains, and glaciers, and many glacial rivers flow to the sea through the lowlands. Iceland is warmed by the Gulf Stream and has a temperate climate, despite a high latitude just outside the Arctic Circle. Its high latitude and marine influence keep summers chilly, with most of the archipelago having a tundra climate.

The Faroe Islands, or the Faeroe Islands—a North Atlantic archipelago located 200 miles (320 km) north-northwest of the United Kingdom and about halfway between Norway and Iceland—are an autonomous country of the Kingdom of Denmark. Total area is about 1,400 square kilometres (540 sq mi) with a population of 50,322 in October 2017.

For the historical entity see: syssel .

Árnessýsla was a large county of south-western Iceland. It had an area of 8287 km².

Austur-Húnavatnssýsla was a county of Iceland located in the Northwestern Region of the country. The largest towns were Blönduós and Skagaströnd

Austur-Skaftafellssýsla was a county of Iceland, located in the Eastern Region of the country.

The politics of Iceland take place in the framework of a parliamentary representative democratic republic, whereby the President is the head of state, while the Prime Minister of Iceland serves as the head of government in a multi-party system. Executive power is exercised by the government. Legislative power is vested in both the government and the parliament, the Althingi. The judiciary is independent of the executive and the legislature.

Iceland was historically divided into 23 counties, sýslur and 23 independent towns, kaupstaðir. Iceland is now split up between 24 sýslumenn (magistrates) that are the highest authority over the local police and carry out administrative functions such as declaring bankruptcy and marrying people outside of the church. The jurisdictions of these magistrates often follow the lines of the historical counties but not always. When speaking of these new "administrative" counties the custom is to associate them with the county seats rather than using the names of the traditional counties, even when they cover the same area.

Egilsstaðir is a town in east Iceland on the banks of the Lagarfljót river.

Barðastrandarsýsla was a county in northwestern Iceland in the Westfjords region. It included Bjargtangar, the westernmost point in Iceland and westernmost point in Europe. It was named after Barðaströnd coast. It was often divided into east and west counties. Its villages were Króksfjarðarnes, Reykhólar, Vesturbyggð and Tálknafjörður. Known places within the area are Flatey and Látrabjarg.

Norður-Þingeyjarsýsla was a county in northeastern Iceland. It included Rifstangi, the northernmost point in mainland Iceland. 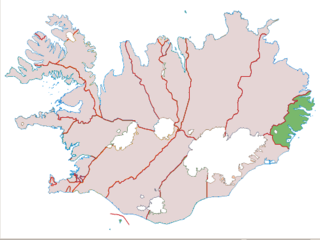 Suður-Múlasýsla was a county in eastern Iceland. It included Gerpir, the easternmost point in Iceland.

Jóhann Gunnar Jóhannsson was an Icelandic composer who wrote music for a wide array of media including theatre, dance, television and films. His work is stylised by its blending of traditional orchestration with contemporary electronic elements.

Articles related to Iceland include:

Vehicle registration plates in Iceland are issued by the Icelandic Transport Authority and are made in the state penitentiary. The plates are made of aluminium with reflective base and embossed characters.

Finnboga saga ramma is an Icelandic saga that recounts the life of Finnbogi hinn rammi. The story takes place in Flateyjardalur in Suður-Þingeyjarsýsla and in other places in Iceland, as well as in Norway. The events supposedly took place in the 10th century.

Vestur-Húnavatnssýsla was a county of Iceland, located in the Northwestern Region of the country.

Öræfasveit or Öræfi is a western region in Austur-Skaftafellssýsla, Iceland. It lies between Breiðamerkursandur and the river Skeiðará, east of the village of Kirkjubæjarklaustur and South, West and East of the Öræfajökull volcano. It has been a part of the municipality of Hornafjörður since 1998. In the Middle Ages, this region was called Hérað or Litlahérað, but was deserted in the wake of the 1362 eruption of Öræfajökull and the subsequent flooding of the region. After these events the region was simply called Öræfi ("wilderness/desolation").

Framhaldsskólinn í Austur-Skaftafellssýslu is a secondary school located in Höfn, southeast Iceland. It was founded in 1987 by the Icelandic government and municipalities in Austur-Skaftafellssýsla. The first 15 years, it was located in Nesjaskóli, in Nes, a nearby rural area, but was moved to a new building, Nýheimar, in 2002. The school has about 200 students, mostly locals, but distance education is also quite common. Current principal is Eyjólfur Guðmundsson.