Stanley Donald Stookey (May 23, 1915 – November 4, 2014) was an American inventor. He had 60 patents in his name related to glass and ceramics, some patents solely his and others shared as joint patents with other inventors. His discoveries and inventions have contributed to the development of ceramics, eyeglasses, sunglasses, cookware, defense systems, and electronics. [1] [3]

He was a research director at Corning Glass Works for 47 years doing R & D in glass and ceramic development. His inventions include Fotoform, CorningWare, Cercor, Pyroceram and Photochromic Ophthalmic glass eyewear. [3]

Stookey was born on May 23, 1915 in Hay Springs, Nebraska, the eldest of four children born to Stanley and Hermie Stookey. Both of his parents were teachers, and his father also worked at some point in time as a bank clerk. When Stookey was about 6 years old, the family moved to Cedar Rapids, Iowa. [3]

Stookey went to Coe College from 1934 to 1936, where he graduated with his first degree, a liberal arts degree in chemistry and mathematics. [1] [3] Stookey’s grandfather (Stephen Stookey) was once a professor of botany and geology at that same college. [3] After graduation from Coe College, Stookey went to Lafayette College in Easton, Pennsylvania in 1937. [1] [3] He received a $1000 fellowship to cover living expenses and as a teaching laboratory assistant in the chemistry lab. [3] In 1938, he earned his Master of Science degree in chemistry from Lafayette College. [3] Stookey then went to Massachusetts Institute of Technology in Cambridge where he received a doctorate in chemistry in 1940. [1] [3] The same year, he married his wife Ruth. [3] He received an honorary degree from Alfred University in 1984. [3]

Stookey took his career job at Corning Glass Works in 1940. He carried out research on glass and ceramics, which led to several inventions. Stookey studied and experimented with opal glass and glass ceramics. [3]

One of Stookey's earliest innovations was FotoForm glass. The scientific community recognized its value around 1948. FotoForm glass is used in computer manufacturing and communications technology. A serendipitous invention made by Stookey in 1953 was when he took a piece of FotoForm glass and mistakenly heated it to 900 °C when he meant to heat it to 600 °C. When an oven thermometer was stuck on the higher temperature, Stookey had accidentally created the first glass-ceramic, Fotoceram. [3] It was later known also as Pyroceram. This was the first glass-ceramic and eventually led to the development of CorningWare in 1957. CorningWare went to the consumer marketplace the next year in 1958 for cookware by Corning Glass Works and became just one of Stookey's multimillion-dollar inventions. It influenced the development of VisionWare, which is transparent cookware. [3] VisionWare was patented by Corning Glass Works in 1966. [3]

Pyroceramic glass has the necessary properties to be used by the military for the nose cones of supersonic radar domes in guided missiles applied in defense. [3] It has the special properties of extreme hardness, super strength, resistance to high heat and transparency to radar waves. [3] It is the basis for Gorilla Glass, used in iPhones and other LCD screens.

Stookey also developed photochromic glass. [1] Photochromic glass is a glass that is used to make ophthalmic lenses that darken in bright light. These lenses were first available to consumers in the 1960s as sunglasses made by Corning Glass Works. It was a joint discovery and development of Stookey with William Armistead. Stookey also invented photosensitive glass using gold in which permanent colored photographs can be produced. [1]

Stookey retired from Corning Glass Works in 1987 after a career of 47 years. [1]

Together he and his wife raised three children named Robert, Margaret and Donald Bruce. [3] They had six grandchildren and eight great-grandchildren. [3] He died at the age of 99 in 2014. [2]

Stookey has held membership in many professional organizations and societies, including,

Paul Soldner was an American ceramic artist, noted for his experimentation with the 16th-century Japanese technique called raku, introducing new methods of firing and post firing, which became known as American Raku.

Corning Incorporated is an American multinational technology company that specializes in specialty glass, ceramics, and related materials and technologies including advanced optics, primarily for industrial and scientific applications. The company was named Corning Glass Works until 1989. Corning divested its consumer product lines in 1998 by selling the Corning Consumer Products Company subsidiary to Borden, but still holds an interest of about 8 percent. 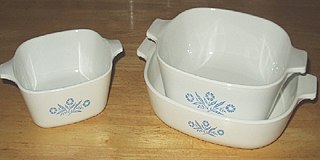 Corning Ware, also written CorningWare, was originally a brand name for a unique glass-ceramic (Pyroceram) cookware resistant to thermal shock. It was first introduced in 1958 by Corning Glass Works in the United States. The brand was later spun off with the sale of the Corning Consumer Products Company subsidiary. Glass-ceramic based Corning Ware can be taken from the refrigerator or freezer and used directly on the stovetop, in an oven or microwave, under a broiler, for table / serving use, and when ready for cleaning put directly into a dishwasher. CorningWare is sold worldwide, and it is popular in North America, Asia, and Australia.

Games Slayter was a prolific U.S. engineer and inventor. He is best known for developing Fiberglass, starting with a new method of producing glass wool in 1933.

Corelle Brands, LLC is an American kitchenware products maker and distributor based in Rosemont, Illinois.

Photochromic lenses are optical lenses that darken on exposure to specific types of light of sufficient intensity, most commonly ultraviolet (UV) radiation. In the absence of activating light the lenses return to their clear state. Photochromic lenses may be made of glass, polycarbonate, or another plastic. They are principally used in eyeglasses that are dark in bright sunlight, but clear in low ambient light conditions. They darken significantly within about a minute of exposure to bright light, and take somewhat longer to clear. A range of clear and dark transmittances is available.

John Burnette MacChesney II is a Bell Labs pioneer in optical communication, best known for his 1974 invention of the modified chemical vapor deposition (MCVD) process with colleague P.B. O'Connor, and for co-inventing high-purity "sol-gel" overcladding for optical fiber in the early 1980s. These inventions were key to the commercial manufacture of optical fiber.

Irwin Lachman age 88, is a co-inventor of the catalytic converter.

Dr. Robert D. Maurer is an American industrial physicist noted for his leadership in the invention of optical fiber.

Photosensitive glass, also known as photostructurable glass (PSG), or photomachinable glass, is a crystal-clear glass that belongs to the lithium-silicate family of glasses, in which an image of a mask can be captured by microscopic metallic particles in the glass when it is exposed to short wave radiations such as ultraviolet light. Photosensitive glass was first discovered by S. Donald Stookey in 1937.

Rodney D. Bagley is an engineer and co-inventor of the catalytic converter.

Donald B. Keck is an American research physicist and engineer most noted for his involvement in developing low-loss optical fiber. Keck grew up in Lansing, Michigan and attended Michigan State University, after which he joined Corning Incorporated’s research department. As a senior research scientist for Corning, Keck, along with Robert D. Maurer and Peter C. Schultz, designed the first optical fiber with optical losses low enough for wide use in telecommunications.

Pyroceram is the original glass-ceramic material developed and trademarked by Corning Glass in the 1950s. Pyroceram is a visually clear glass material with the appearance of window glass, commonly used in glass stove tops, wood stove doors, etc. it has high heat tolerance and low thermal expansion.

Cer-vit is a family of glass-ceramic materials that were invented by Owens Illinois in the mid-1960s. Its principle ingredients are the oxides of lithium, aluminum and silicon. It is melted to form a glass which is then heat treated to nucleate and crystallized it into a material that is more than 90% microscopic crystals. Its formulation and heat treatment can be modified to produce a variety of material properties. One form is a material that is transparent and has a near zero thermal expansion. Its transparency is because the microscopic crystals are smaller than the wave length of light and are transparent, and its low thermal expansion is because they have a spodumene structure.

Kapil Dev Sharma born in Gujaranwala was an Indian scientist and technologist who specialized as a glass technologist.

Visions is a brand of transparent stove top cookware created by Corning France and introduced to Europe during the late 1970s. In 1983, it was introduced in the United States and became the number one selling cookware set for a number of years. Visions is made of Calexium, a transparent material belonging to the Pyroceram family of glass-ceramics. It is one of the few cookware lines than can be used on the range, in the oven, and under a broiler. It will withstand heat up to 850 °C (1,560 °F) with thermal traits similar to Corning Ware plus improved resistance to staining and the detrimental effects of acids and detergents. Visions is sold worldwide by Corelle Brands, LLC.

Gurpreet Singh is an associate professor at Kansas State University in the department of Mechanical and Nuclear Engineering. He is endowed by the Harold O. and Jane C. Massey Neff Professorship in Mechanical Engineering. Singh was born in Ludhiana, India; he currently resides in the U.S.