Sunand Tryambak Joshi (born June 22, 1958) is an American writer, musician, critic and award-winning scholar whose work has largely focused on weird and fantastic fiction, especially the life and work of H. P. Lovecraft and associated writers. Joshi is a lifelong scholar and editor of H. P. Lovecraft and restored Lovecraft's texts for Arkham House. He has published a lengthy biography of H. P. Lovecraft, I Am Providence: The Life and Times of H. P. Lovecraft (2 vols). [1] [2] Additionally, Joshi has been a prolific editor of works of weird fiction by various authors and a historian of the field across a number of volumes. He has also written extensively on atheism and rationalism, as well as forms of prejudice including sexism and racism. Joshi lives with his wife, Mary Krawczak Wilson, in Seattle, Washington. Joshi's autobiography What Is Anything?: A Life in Lovecraft was published in 2019.

His literary criticism focuses upon the worldviews of authors. His The Weird Tale examines horror and fantasy writing by Arthur Machen, Algernon Blackwood, Dunsany, M. R. James, Bierce and Lovecraft. [3]

Joshi and David E. Schultz edited volumes of Lovecraft's letters with Necronomicon Press (including those to Robert Bloch, Henry Kuttner, Samuel Loveman and Vincent Starrett); for Night Shade Books (Mysteries of Time and Spirit: Letters to Donald Wandrei ) and Letters from New York; and for University of Tampa Press (O Fortunate Floridian: Letters to Robert H. Barlow ). Some of these volumes have now been published in expanded editions by Hippocampus Press.

Joshi edited the five-volume set of Lovecraft's Collected Essays issued by Hippocampus Press from 2004 to 2006. He edited two annotated volumes of Lovecraft's best work for Dell books (the second with Peter H. Cannon). He and David E. Schultz edited the collected poetry of Clark Ashton Smith, issued by Hippocampus Press (3 volumes, 2007–2008) and the collected poetry of George Sterling (3 volumes, 2013).

Joshi was general editor of Cthulhu Mythos works from Perilous Press, including works by Michael Shea and Brian Stableford. The first publication was Shea's Copping Squid and Other Mythos Tales (2009), with Stableford's volume titled The Womb of Time (two Mythos novellas).

In 1987, Joshi became the fifth Official Editor of the Esoteric Order of Dagon. He has continued to be the OE of this amateur press association for upwards of 30 years.

In 2011, Joshi became editor-in-chief of The American Rationalist magazine, which he edited for some years before changes at the magazine resulted in the discontinuation of his involvement.

Joshi, born in Pune, India, emigrated with his family to the US at the age of four. He was raised (primarily by his mother, an academic) in Illinois and Indiana, while his father (also an academic) remained in India, though his father eventually joined the family in the States.

Joshi discovered the work of Lovecraft at age 13 in a public library in Muncie, Indiana. He also read L. Sprague de Camp's biography of Lovecraft, Lovecraft: A Biography , on publication in 1975, and began thereafter to devote himself to Lovecraft. This devotion led him to decline offers from Yale and Harvard so that he could attend Brown University. [4] He received a B.A. (1980) and M.A. (1982) in classics. After graduating, he undertook additional graduate school at Princeton University, from 1982 to 1984.[ citation needed ]

He then worked in New York as a senior editor at Chelsea House Publishers under the chief editorship of Harold Bloom.

In August 2014, Joshi opposed the campaign to change the World Fantasy Award statuette from a bust of Lovecraft to one of African-American author Octavia Butler. [6] As a person of colour, Joshi has been an ardent defender of Lovecraft's reputation and of the necessity to hold a balanced perspective on Lovecraft's racist attitudes given the general tenor of social attitudes during the times in which Lovecraft lived. Joshi returned his several World Fantasy Awards in protest at the decision to no longer utilise Gahan Wilson's statuette of Lovecraft as the award. The World Fantasy Award has since been changed to one of a leafless tree in front of a moon in bronze designed by sculptor Vincent Villafranca.

Lovecraft and the Cthulhu Mythos

Works by others, reference works, etc.

He has since returned his awards from the World Fantasy Convention for their decision to discontinue use of the bust of H. P. Lovecraft as the basis for their awards. [8] 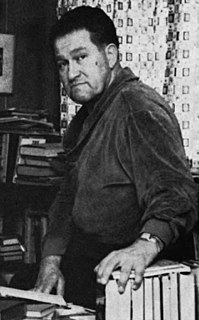 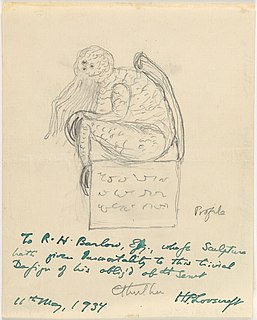 The Cthulhu Mythos is a shared fictional universe, originating in the works of American horror writer H. P. Lovecraft. The term was coined by August Derleth, a contemporary correspondent and protégé of Lovecraft, to identify the settings, tropes, and lore that were employed by Lovecraft and his literary successors. The name Cthulhu derives from the central creature in Lovecraft's seminal short story "The Call of Cthulhu", first published in the pulp magazine Weird Tales in 1928. 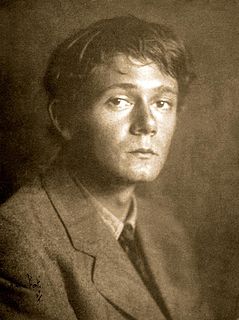 Clark Ashton Smith was an American writer and artist. He achieved early local recognition, largely through the enthusiasm of George Sterling, for traditional verse in the vein of Swinburne. As a poet, Smith is grouped with the West Coast Romantics alongside Joaquin Miller, Sterling, and Nora May French and remembered as "The Last of the Great Romantics" and "The Bard of Auburn". Smith's work was praised by his contemporaries. H. P. Lovecraft stated that "in sheer daemonic strangeness and fertility of conception, Clark Ashton Smith is perhaps unexcelled", and Ray Bradbury said that Smith "filled my mind with incredible worlds, impossibly beautiful cities, and still more fantastic creatures".

Howard Phillips Lovecraft was an American writer of weird and horror fiction, who is known for his creation of what became the Cthulhu Mythos. 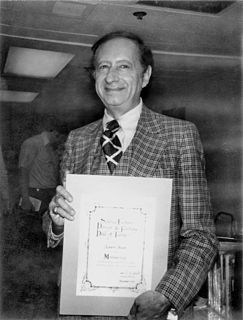 Robert Albert Bloch was an American fiction writer, primarily of crime, horror, fantasy and science fiction, from Milwaukee, Wisconsin. He is best known as the writer of Psycho (1959), the basis for the film of the same name by Alfred Hitchcock. His fondness for a pun is evident in the titles of his story collections such as Tales in a Jugular Vein, Such Stuff as Screams Are Made Of and Out of the Mouths of Graves. 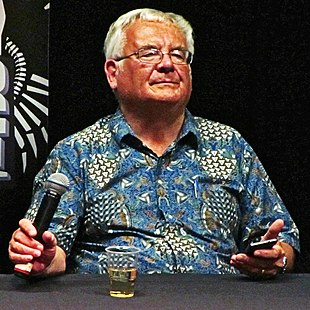 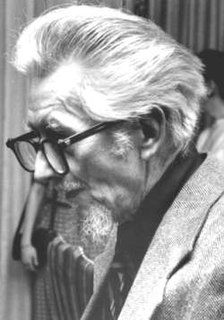 Frank Belknap Long was an American writer of horror fiction, fantasy, science fiction, poetry, gothic romance, comic books, and non-fiction. Though his writing career spanned seven decades, he is best known for his horror and science fiction short stories, including early contributions to the Cthulhu Mythos. During his life, Long received the World Fantasy Award for Life Achievement, the Bram Stoker Award for Lifetime Achievement, and the First Fandom Hall of Fame Award (1977). 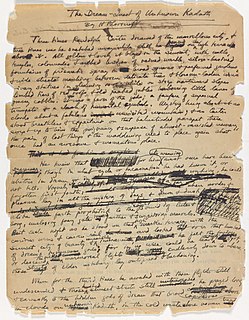 The Dream-Quest of Unknown Kadath is a novella by American writer H. P. Lovecraft. Begun probably in the autumn of 1926, the draft was completed on January 22, 1927 and it remained unrevised and unpublished in his lifetime. It is both the longest of the stories that make up his Dream Cycle and the longest Lovecraft work to feature protagonist Randolph Carter. Along with his 1927 novel The Case of Charles Dexter Ward, it can be considered one of the significant achievements of that period of Lovecraft's writing. The Dream-Quest combines elements of horror and fantasy into an epic tale that illustrates the scope and wonder of humankind's ability to dream.

"The Haunter of the Dark" is a horror short story by American author H. P. Lovecraft, written between 5–9 November 1935 and published in the December 1936 edition of Weird Tales. It was the last-written of the author's known works, and is part of the Cthulhu Mythos. The epigraph to the story is the second stanza of Lovecraft's 1917 poem "Nemesis".

Whispers was one of the new horror and fantasy fiction magazines of the 1970s. 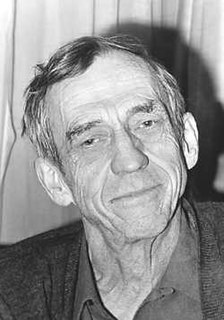 "The White Ship" is a horror short story by American writer H. P. Lovecraft. It was first published in The United Amateur #2, November 1919, and later appeared in the March 1927 issue of Weird Tales.

An H. P. Lovecraft Encyclopedia is a reference work written by S. T. Joshi and David E. Schultz. It covers the life and work of American horror fiction writer H. P. Lovecraft. First published in 2001 by Greenwood Publishing Group, it was reissued in a slightly revised paperback edition by Hippocampus Press.

Necronomicon Press is an American small press publishing house specializing in fiction, poetry and literary criticism relating to the horror and fantasy genres. It is run by Marc A. Michaud.

Wilum Hopfrog Pugmire, was a writer of weird fiction and horror fiction based in Seattle, Washington. His works typically were published as W. H. Pugmire and his fiction often paid homage to the lore of Lovecraftian horror. Lovecraft scholar, biographer, and literary executor S. T. Joshi described Pugmire in 2011 as "the prose-poet of the horror/fantasy field; he may be the best prose-poet we have," and "perhaps the leading Lovecraftian author writing today."

Joseph Vernon Shea (1912–1981) was an American author of horror, fantasy, poetry, and essays; and a correspondent of H. P. Lovecraft, Clark Ashton Smith, and August Derleth. 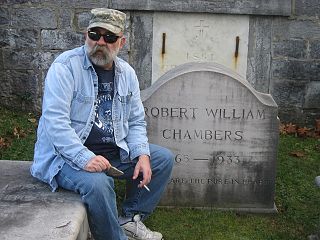 Joseph S. Pulver Sr. was an author and poet, much of whose work falls within the horror fiction, noir fiction / hardboiled, and dark fantasy genres. He lived in Germany, and died from COPD and other issues in a German hospital on April 24, 2020.