On March 15, 2020, during a video conference of the SAARC Heads of State and Government, Indian Prime Minister Narendra Modi proposed a Coronavirus Emergency Fund. This emergency fund was set up in response to the global coronavirus pandemic. [1] The initiative seeks to mitigate the risks associated with the coronavirus pandemic in the South Asian region. The other members of the SAARC expressed their support of Narendra Modi and his proposal for the coronavirus emergency fund. [2] 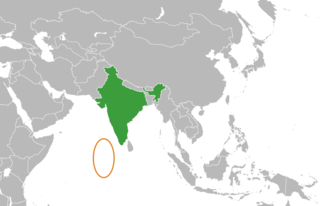 India–Maldives relations refer to the bilateral relations between India and Maldives. India and Maldives are neighbors sharing a maritime border. Relations have been friendly and close in strategic, economic and military cooperation. India continues to contribute to maintaining security on the island nation. 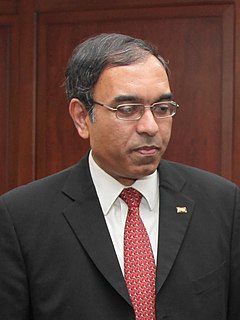 Secretary-General of the South Asian Association for Regional Cooperation, is head of a SAARC Secretariat, which is headquartered in Kathmandu, Nepal. SAARC is an economic and geopolitical union between the eight South Asian member nations, Afghanistan, Bangladesh, Bhutan, India, Maldives, Nepal, Pakistan and Sri Lanka. Secretary-General is appointed for a three-year term by election by a council of Ministers from member states. Secretary-General is assisted by eight deputies, one from each nation, who also reside in Kathmandu. SAARC Secretariat was established in Kathmandu on 16 January 1987 by Bangladeshi diplomat Abul Ahsan, who was its first Secretary-General, and was inaugurated by King Birendra Bir Bikram Shah of Nepal. Since its creation, its member nations have contributed to a total of fourteenth General Secretaries. Sri Lanka's diplomat Esala Weerakoon is the current Secretary-General, having assumed charge on 1 March 2020. 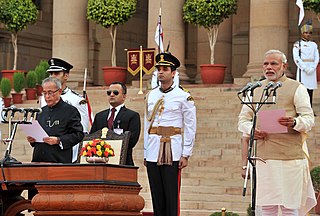 Narendra Modi, parliamentary leader of the Bharatiya Janata Party, started the first tenure of his prime ministership, after his swearing-in as the 14th Prime Minister of India on 26 May 2014. 45 other ministers were also sworn in along with Modi. The ceremony was noted by media for being the first ever swearing-in of an Indian Prime Minister to have been attended by the heads of all SAARC countries.

The foreign policy of the Modi government is associated with the policy initiatives made towards other states by the current government of India after Narendra Modi assumed the office of prime minister on May 26, 2014.

The following is a timeline of the Premiership of Narendra Modi from his inauguration as Prime Minister of India on 26 May 2014 till now. The following are the highlights of the major events that took place under his premiership.

The eighteenth summit of 'South Asian Association of Regional Cooperation' (SAARC) was held in Kathmandu, the capital of Federal Democratic Republic of Nepal during 26–27 November 2014. The theme of the summit was Deeper Integration for Peace and Prosperity, focused on enhancing connectivity between the member states for easier transit-transport across the region. Sushil Koirala, the then Nepalese Prime Minister, was the main host of the event which took place in Rastriya Sabha Griha The summit took place after an interval of three years as the previous summit was held in 2011 in Maldives.

The 19th SAARC summit was a scheduled diplomatic conference, which was originally planned to be held in Islamabad, Pakistan on 15–19 November 2016 but got cancelled after an attack on Indian army camp in Kashmir. The summit was to be attended by the leaders of the eight SAARC member states and representatives of observers and guest states. 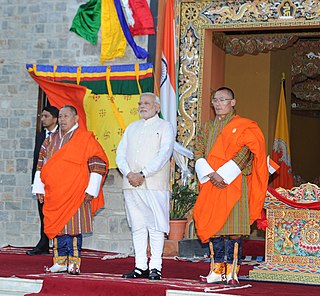 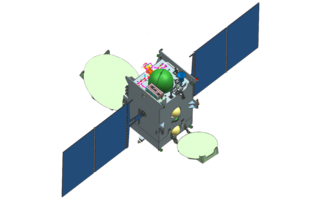 The South Asia Satellite, formerly known as SAARC Satellite, is a geostationary communications and meteorology satellite operated by the Indian Space Research Organisation for the South Asian Association for Regional Cooperation (SAARC) region. The satellite was launched on 5 May 2017. During the 18th SAARC summit held in Nepal in 2014, Indian Prime Minister Narendra Modi mooted the idea of a satellite serving the needs of SAARC member nations as a part of his neighbourhood first policy. Afghanistan, Bangladesh, Bhutan, Maldives, Nepal and Sri Lanka are the users of the multi-dimensional facilities provided by the satellite.

Indian foreign aid is the aid given by the Indian government to other governments. India's major quantum of foreign aid is given to neighbouring countries. According to India's budget in 2021-22, it's direct overseas aid stood at ₹18,154 crore (US$2.5 billion). That apart, India also extended a direct line of credit worth $30.66 billion dollars to several foreign countries for developmental projects. The way of providing a much larger share of aid in the form of concessional loans is quite similar to that of China. India has setup 'Indian Agency for Partnership in Development', as a part of Ministry of External Affairs (India) to channelize aid to recipient nations. 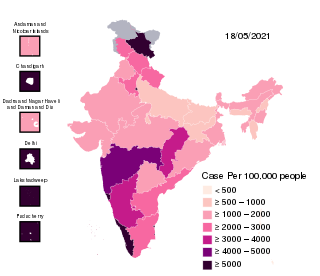 The COVID-19 pandemic in India is a part of the worldwide pandemic of coronavirus disease 2019 caused by severe acute respiratory syndrome coronavirus 2. As of 27 September 2021, according to official figures, India has the second-highest number of confirmed cases in the world with 33,678,786 reported cases of COVID-19 infection and the third-highest number of COVID-19 deaths at 448,339 deaths. However these figures exhibit severe under-reporting. 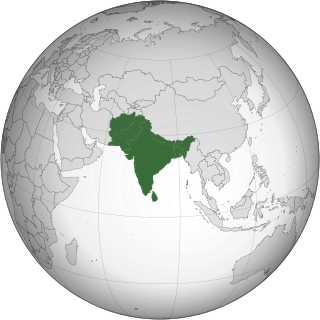 The Prime Minister's Citizen Assistance and Relief in Emergency Situations Fund was created on 27 March 2020, following the COVID-19 pandemic in India.Although the documentation for the constitution of the fund has not been made public, the Government of India has stated that the Prime Minister of India, Narendra Modi, is the chairman of the fund, and that trustees include the Minister of Defence, Rajnath Singh; Minister of Home Affairs, Amit Shah, and Minister of Finance, Nirmala Sitharaman, in the Government of India.

Due to its severity, the COVID-19 pandemic has caused countries to send aid, as part of the international responses and management regarding the pandemic. Types of materials aided includes masks, medical supplies, personal protective equipment, money, and test kits. It started with aid to China as the virus spreads primarily there, and then internationally as it spreads globally. The destination of the aid ranges from hospitals, COVID-19 healthcare workers, research on the vaccine, to societies vulnerable. People donating includes the government of said country, notable people, organizations and institutions, charities, as well as regular people.

COVID-19 Vaccines Global Access, abbreviated as COVAX, is a worldwide initiative aimed at equitable access to COVID-19 vaccines directed by Gavi, the Vaccine Alliance, the Coalition for Epidemic Preparedness Innovations (CEPI), and the World Health Organization (WHO). It is one of the three pillars of the Access to COVID-19 Tools Accelerator, an initiative begun in April 2020 by the WHO, the European Commission, and the government of France as a response to the COVID-19 pandemic. COVAX coordinates international resources to enable low-to-middle-income countries equitable access to COVID-19 tests, therapies, and vaccines. UNICEF is the key delivery partner, leveraging its experience as the largest single vaccine buyer in the world and working on the procurement of COVID-19 vaccine doses, as well logistics, country readiness and in-country delivery.

Vaccine Maitri is a humanitarian initiative undertaken by the Indian government to provide COVID-19 vaccines to countries around the world. The government started providing vaccines from 20 January 2021. As of 9 May 2021, India had delivered around 66.3 million doses of vaccines to 95 countries. Of these, 10.7 million doses were gifted to 47 countries by the Government of India. The remaining 54 million were supplied by the Serum Institute of India under its commercial and COVAX obligations. In late March 2021, the Government of India temporarily froze exports of the Covishield, citing India's own COVID crisis and the domestic need for these vaccines.

Nepal began administration of COVID-19 vaccines on 27 January 2021. 1 million Oxford-Astrazeneca vaccines were provided by India as a grant while Nepal brought 2 million doses from Serum Institute of India (SII) and was one of the first to receive COVID-19 vaccines. The delivery of the first 1 million doses arrived on 21 February. In March, India's decision to ban exports of vaccines created uncertainty over whether Nepal would be able to continue its vaccinations. By April, SII had only provided half of the 2 million doses for which Nepal had paid in full. A spokesperson for the Indian Ministry of External Affairs rejected the notion of an export ban and said “We will export vaccines taking into account the domestic demand.” By late July, there was still uncertainty in Nepal over when SII would deliver the vaccines that were purchased, although Prime Minister Narendra Modi said India would "resume the supply of vaccines soon."