Valbanera was a steamship operated by the Pinillos Line of Spain from 1905 until 1919, when she sank in a hurricane with the loss of all 488 crew and passengers aboard. Valbanera was a 400-foot-long (120 m) steamer capable of carrying close to 1,200 passengers. She sailed a regular route between Spain and Puerto Rico, Cuba, and the Gulf Coast of the United States. The ship sank with the loss of all 488 people on board during the Florida Keys Hurricane in September 1919.

In the summer of 1919 the ship left the Canary Islands after earlier calling at several ports in Spain, loaded with cargo and 1,142 passengers, mostly immigrants to Cuba, and 88 crew members. [2] Although most of the passengers were booked for Havana, 749 left the ship when it called at Santiago de Cuba on September 5. The 1919 Florida Keys Hurricane hit Havana on September 8, before Valbanera reached the port. While the storm was raging an unidentified ship was seen off the harbor entrance signalling for a pilot, but the harbor was closed and the ship was notified it could not enter. The ship acknowledged and signalled it would move away from shore to ride out the storm.

On September 13, the Cuban consul in Key West contacted the commandant of the United States Navy base in Key West concerning rumors that Valbanera had sunk. Radio operators at the base reported hearing Valbanera in contact with the Morro Castle radio station in Havana on September 12, but further investigation indicated that they had probably mistaken the call letters for Infante Isabel, ECY, which had been in contact with Morro Castle, for the call letters for Valbanera, ECV. The last confirmed radio communication with Valbanera had been on September 9. The U.S. Navy submarine chaser USS SC-320 spotted a submerged wreck with just the masts above water in the vicinity of Rebecca Shoal (about 45 miles (72 km) west of Key West) on September 12, but identified it as a two-masted schooner. [2] Two other Navy ships passing the area on September 13 did not notice anything of a wreck. Another sub chaser sent out on September 16 returned the next day with confirmation that a large ship was wrecked on Half Moon Shoal. On September 19 Coast Guard cutter Tuscarora and sub chaser 203 were able to see the name Valbanera on the wreck. The next day the officer who had reported the wrecked schooner on September 12 confirmed that he had seen Valbanera. The wreck was 6 miles (9.7 km) east of Rebecca Shoal, with just the masts and a couple of lifeboats above the water. There were 488 passengers and crew on Valbanera when she sank. No bodies were seen or recovered. [3] [4] 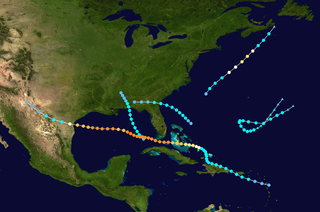 The 1919 Atlantic hurricane season was among the least active hurricane seasons in the Atlantic on record, featuring only five tropical storms. Of those five tropical cyclones, two of them intensified into a hurricane, with one strengthening into a major hurricane Two tropical depressions developed in the month of June, both of which caused negligible damage. A tropical storm in July brought minor damage to Pensacola, Florida, but devastated a fleet of ships. Another two tropical depressions formed in August, the first of which brought rainfall to the Lesser Antilles. 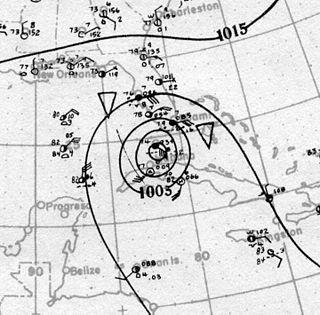 The 1919 Florida Keys hurricane was a massive and damaging tropical cyclone that swept across areas of the northern Caribbean Sea and the United States Gulf Coast in September 1919. Remaining an intense Atlantic hurricane throughout much of its existence, the storm's slow-movement and sheer size prolonged and enlarged the scope of the hurricane's effects, making it one of the deadliest hurricanes in United States history. Impacts were largely concentrated around the Florida Keys and South Texas areas, though lesser but nonetheless significant effects were felt in Cuba and other areas of the United States Gulf Coast. The hurricanes peak strength in Dry Tortugas in the lower Florida keys, also made it one of the most powerful Atlantic hurricanes to make landfall in the United States.

The Rebecca Shoal Light was located on a treacherous coral bank, Rebecca Shoal, 6.2 miles (10 km) west of the Marquesas Keys and 31 miles (50 km) east of the Dry Tortugas. The bank has at least a depth of 11 feet (3.4 m) and is subject to strong currents and rough seas.

San Pedro Underwater Archaeological Preserve State Park is a Florida State Park located in 18 feet (5.5 m) of water, approximately 1.25 nautical miles (2.32 km) south of Indian Key. It became the second Florida Underwater Archaeological Preserve when it opened to the public in 1989. The heart of the park is the San Pedro, a submerged shipwreck from a 1733 Spanish flotilla, around which visitors can dive and snorkel. The San Pedro, a 287-ton Dutch-built vessel, and 21 other Spanish ships under the command of Rodrigo de Torres left Havana, Cuba, on Friday, July 13, 1733, bound for Spain. The San Pedro carried a cargo of 16,000 silver Mexican pesos and crates of Chinese porcelain. A hurricane struck the fleet, while entering the Straits of Florida, and sank or swamped most of the fleet. The wrecksite includes an "eighteenth century anchor, replica cannons, ballast stones encrusted with coral, a dedication plaque, and a mooring buoy system." The wreck was added to the U.S. National Register of Historic Places on May 31, 2001.

City of Washington was an American merchant steamship that aided in rescuing the crew of USS Maine when it exploded in the harbor of Havana, Cuba, in 1898.

HMS Tyger, often spelled Tiger, was a 38-gun fourth rate frigate of the Royal Navy, built by Peter Pett II at Woolwich and launched in 1647. The term 'frigate' during the period of this ship referred to a method of construction, rather than a role which did not develop until the following century. Tyger was the third ship of the Royal Navy to bear the name, and by successive rebuildings she served for almost a century until she was wrecked in the Dry Tortugas in 1742. The ship's crew was stranded on Garden Key for 56 days, fighting off Spanish attempts to capture them, and then spent another 56 days sailing in small boats 700 miles to Port Royal, Jamaica. Remarkably, only five crew members died during this period: three killed by the Spanish, and two others of natural causes. Six crewmen were captured and imprisoned by the Spanish. The captain and three of his lieutenants were court-martialed over the wreck and subsequent events. 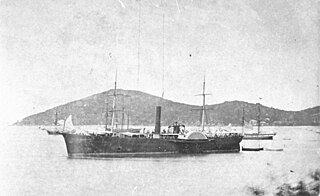 USS De Soto was a fast wooden-hulled sidewheel steamship that saw service as a U.S. Navy gunboat during the American Civil War.

The New York and Cuba Mail Steamship Company, commonly called the Ward Line, was a shipping company that operated from 1841 until liquidated in 1954. The line operated out of New York City's Piers 15, 16, and 17—land which later became the site of the South Street Seaport and also the Manhattan terminal of the IKEA-Red Hook ferry route. The company’s steamers linked New York City with Nassau, Havana, and Mexican Gulf ports. The company had a good reputation for safety until a series of disasters in the mid-1930s, including the SS Morro Castle disaster. Soon after, the company changed its name to the Cuba Mail Line. In 1947, the Ward Line name was restored when service was resumed after World War II, but rising fuel prices and competition from airlines caused the company to cease operation in 1954. 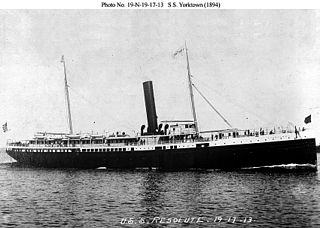 SS Yorktown was launched February 10, 1894, by Delaware River Iron Ship Building and Engine Works, Chester, Pennsylvania for the Old Dominion Steamship Company for the company's overnight New York City/Norfolk, Virginia service. The United States Navy purchased Yorktown on April 21, 1898, to be commissioned as the second USS Resolute, an auxiliary cruiser and transport that saw naval service during the Spanish–American War 1898–1899. The United States Department of War acquired the ship on January 22, 1900, for service as the United States Army Transport (USAT) Rawlings. The ship was sold to the Merchants and Miners Transportation Company of Baltimore, Maryland on July 27, 1901, and renamed Powhatan. Powhatan was wrecked in 1916 and in 1919 rebuilt as the world's first turbo-electric propelled passenger ship Cuba for luxury passenger and express freight service between Florida and Cuba with the Miami Steamship Company beginning service in 1920. Renamed Seneca, the ship burned and sank December 30, 1927, at Hoboken, New Jersey then refloated September 2, 1928, and scrapped. 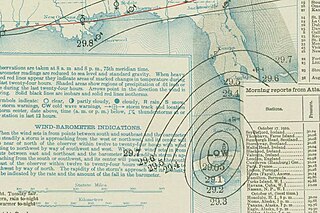 The 1910 Cuba hurricane, popularly known as the Cyclone of the Five Days, was an unusual and destructive tropical cyclone that struck Cuba and the United States in October 1910. It formed in the southern Caribbean on October 9 and strengthened as it moved northwestward, becoming a hurricane on October 12. After crossing the western tip of Cuba, it peaked in intensity on October 16, corresponding to Category 4 on the Saffir-Simpson Hurricane Scale. That same day, the hurricane moved in a counterclockwise loop and hit Cuba again. It then tracked toward Florida, landing near Cape Romano. After moving through the state, it hugged the coast of the Southeastern United States on its way out to sea.

HMS Nimble was a Royal Navy 5-gun schooner-of-war. She was employed in anti-slave trade patrol from 1826 until 1834, when she was wrecked on a reef with the loss of 70 Africans who had been rescued from a slave ship.

The 1842 Atlantic hurricane season featured several maritime catastrophes in the Gulf of Mexico and along the U.S. East Coast, and produced one of the only known tropical cyclones to directly affect the Iberian Peninsula. As the season falls outside the scope of the Atlantic hurricane database, records of most storms in 1842 are scarce, and only approximate tracks are known. The first documented storm of the season battered the coast of North Carolina in mid-July, wrecking dozens of ships and destroying homes along the Outer Banks. A little over a month later, another storm impacted the same region and caused several more shipwrecks that killed at least 12 men. This storm later doused the Mid-Atlantic states with flooding rains. In early September, a powerful storm known as "Antje's Hurricane"—named after a ship that it dismasted—tracked generally westward after first being spotted over the Leeward Islands. After yielding widespread destruction across the Bahamas, the storm traversed the Florida Straits, causing severe damage in both northern Cuba and the lower Florida Keys. Many ships and their crews were lost to the storm as it crossed the Gulf of Mexico; it finally struck northern Mexico on September 8.

The following index is provided as an overview of and topical guide to recreational dive sites:

SS Managua was a Nicaraguan Cargo ship that the German submarine U-67 torpedoed on 16 June 1942 in the Straits of Florida while she was travelling from Charleston, South Carolina, United States to Havana, Cuba with a cargo of Potash.

USRC Gresham was a cruising cutter and auxiliary gunboat built for the United States Revenue Cutter Service to patrol the Great Lakes. She was one of a series of cutters named for former U.S. Secretaries of the Treasury. Her namesake Walter Q. Gresham served as the 35th Secretary of the Treasury in 1884 and died in 1895 while serving as the 33rd U.S. Secretary of State. She became part of the newly created United States Coast Guard in 1915, and also served as a coastal convoy escort and patrol boat under United States Navy control during both World War I and World War II. After being decommissioned by the Coast Guard in 1944, she eventually came under Israeli control in 1947. She carried Jewish refugees from Italy to Palestine and later served in the fledgling Israeli Navy until 1951.