Anil Kapoor plays Saaheb, the youngest son of the family. He is focused on football, his passion. Due to this, everyone in the family constantly tells him he is no good. However, when circumstances demand, he gives up his kidney to fund his sister's marriage, at the cost of his football career.

The movie has catchy songs like - "Yaar Bina Chain Kahan Re" and "Kya Khabar Kya Pata" - which remain popular to this day.

Mr. Sharma (Utpal Dutt) lives with his four sons (Biswajeet, Vijay Arora, Dilip Dhawan) and a daughter, Geeta or Bulti. Only the youngest son, Sunil (Anil Kapoor) and Geeta are unmarried. Mr. Sharma arranges his daughter's marriage with a man who will be re-locating to London, U.K. The family requires Rs.50,000/- for the expenses, and will even go to the extent of selling their house. Sunil or Saaheb as he is referred to, is the black sheep of the family - unemployed & uneducated - only interested in playing football. None of the elder brothers have any means of coming up with money for the expenses, and two of them even scheme with their respective wives to take over the house. Mr. Sharma attempts to raise the money, in vain. Sunil then makes the ultimate sacrifice for the marriage of his sister, and brings the money to his dad. His dad believes that Sunil has stolen the money, and Sunil is forced to lie about where he got the money from. The family only finds out after the marriage ceremony is over, and do not hesitate to blame him. It is then Sujata (Raakhee) reveals the secret of how the money came to Sunil's possession.

All lyrics are written by Anjaan; all music is composed by Bappi Lahiri.

The Filmfare Award for Best Supporting Actor is given by Filmfare as part of its annual Filmfare Awards for Hindi films, to recognise a male actor who has delivered an outstanding performance in a supporting role. Although the awards started in 1954, awards for the best supporting actor category started only the following year 1955. As of 2016, Pran, Amrish Puri, Amitabh Bachchan, Abhishek Bachchan and Anil Kapoor lead the list, with three wins each. Anil Kapoor currently also holds the record of being the youngest recipient of the award, whereas Rishi Kapoor holds the record for being the eldest.

Sagar Sangam is a 1988 Hindi film. A family drama, it had a very long delayed release. The film was announced in 1985, had its records released in 1986. The film stars Mithun Chakraborty, Shatrughan Sinha, Raakhee, Padmini Kolhapure, Anita Raj and Asha Parekh. 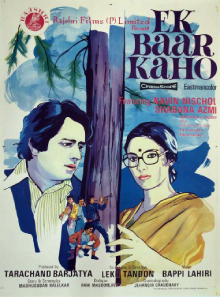 Ek Baar Kaho is a 1980 Hindi-language film produced by Tarachand Barjatya and directed by Lekh Tandon. The film stars Navin Nischol and Shabana Azmi in lead roles, with a supporting cast of Kiran Vairale, Madan Puri, Rajendra Nath, Jagdeep, Anil Kapoor, Dilip Dhawan and Suresh Oberoi. The climax of this movie was inspired by the climax of 1957 movie An Affair to Remember.