Sadhu Meher (born in Odisha) is an Indian actor, director, and producer . [1]

He has performed in both Odia and Hindi films. [2] He primarily began his career in Hindi films like Bhuvan Shome , Ankur and Mrigaya . Later on shifted his interest towards Odia films. [3] He is one of the actors who gained prominence in Parallel Cinema in the mid-1980s. He also acted in Byomkesh Bakshi in the episodes 'Aadim Shatru (Part 1 & 2)' and 'Chakrant' as Anadi Haldar and Bishupal respectively. He won a National Film Award for Best Actor for Ankur . [4] He was conferred Padma Sri by the Government of India in 2017.

Mulraj Rajda was an Indian writer, actor and director. He worked in Hindi/Gujarati Films and TV Shows. He spent much of his career working in Gujarati cinema and Theater. He is most well known for portraying Janak in Ramanand Sagar's television series Ramayan. Before this, he played various roles in Sagar's other works, including Vikram aur Betaal. He also has portrayed Vashishtha in the television series Vishwamitra. He is the father of fellow actor and Ramayan co-star Sameer Rajda. He also played the role of Kailash Chandra in the episode Bhoot for Byomkesh Bakshi, broadcast by Doordarshan in 1993. He also acted as King Shantanu's royal guru as well as a gandharva mukhiya in B.R. Chopra's Mahabharat.

Mukul Nag is an Indian actor. He is best known for playing the revered saint, Sai Baba of Shirdi, in the Hindi language historical drama series Sai Baba . The series was produced by Sagar Films and broadcast by Star Plus in 2005.

Indrani Dutta is a Bengali film actress and dancer.

Ravi Jhankal is an Indian television, stage and film actor, most known for working in Shyam Benegal's films, including Welcome to Sajjanpur (2008) and Well Done Abba (2010) and for the role of P. V. Narasimha Rao in Pradhanmantri . He is also part of Surnai, Mumbai-based theatre group.

Milind Gunaji is an Indian actor, model, television show host, and author, most known for his roles in Marathi and Hindi cinema. He made his first film appearance in 1993's Papeeha and has since performed in over 250 films and acted as the host of the Zee Marathi channel travel show Bhatkanti. Gunaji has served as the Government of Maharashtra's brand ambassador for forest and wildlife. Currently he is the brand ambassador for Hill Station Mahabaleshwar.

Shilpa Tulaskar is an Indian actress who has acted in Marathi films and Hindi television shows.

Sadiya Siddiqui Siddiqui is an Indian film and television actress who rose into fame playing the role of Priya on the Zee Tv show Banegi Apni Baat. She is also known for playing Nanda in Star Plus's Tu Sooraj Main Saanjh, Piyaji.

Anang Desai is an Indian film and television actor. Desai has appeared in more than 80 television shows and is popularly known for his portrayal of the character Babuji in the television series Khichdi and its eponymous film. He is an alumnus of the National School of Drama, New Delhi and was a part of the institute's professional repertory, performing Hindi theatre extensively before starting his career in the television and film domains.

Ashiesh Roy was an Indian television and film actor.

Film, television, radio and other adaptations that have been made of Sharadindu Bandyopadhyay's series of detective novels featuring the character Byomkesh Bakshi.

Byomkesh Bakshi is the first Hindi Television series based on the Byomkesh Bakshi character created by Sharadindu Bandyopadhyay. The series stars Rajit Kapur and K.K. Raina as Byomkesh Bakshi and Ajit Kumar Banerjee, respectively. It features music and background score from Ananda Shankar. It became critically acclaimed and most celebrated adaptation of the character keeping it fresh even after decades. It has been re-telecasted on DD National from 28 March 2020 during the lockdown of 21 days due to coronavirus.

Byomkesh is a 2014 Indian Bengali crime fiction television series based on the Bengali sleuth Byomkesh Bakshi created by Sharadindu Bandyopadhyay. The series stars Gaurav Chakrabarty, Saugata Bandyopadhyay and Ridhima Ghosh as Byomkesh Bakshi, Ajit and Satyabati respectively. The series premiered on 20 November 2014 on Colors Bangla channel and ended on 14 November 2015. The first episode was narrated by Sabyasachi Chakrabarty.

Byomkesh Pawrbo is a 2016 Indian Bengali language thriller film directed by Arindam Sil and the film is the sequel to 2015 film Har Har Byomkesh. Produced jointly under the banner of Shree Venkatesh Films and Surinder Films, the film reprises cinematography and music by Soumik Haldar and Bickram Ghosh respectively. Sayantika Banerjee as Gulab Bai (cameo) is doing a special dance number for a particular scene which is being choreographed by Saroj Khan. The film stars Abir Chatterjee, Ritwick Chakraborty and Sohini Sarkar in lead roles. The movie is based on the story Amriter Mrityu by Saradindu Bandyopadhyay. The film was released on 16 December 2016 to positive critical reception.

Shahnawaz Pradhan is an Indian television and film actor, best known for his portrayal of Sindbad the Sailor in the popular fantasy television series, Alif Laila (1993–97) and playing Hafiz Saeed in Phantom.He has also acted in the Marathi serial Kahe Diya Pardes, aired on Zee Marathi.

Ajay Wadhavkar was a Hindi and Marathi film and television actor. 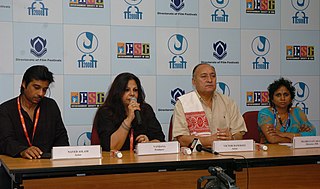 Naved Aslam is an Indian film, television and theatre actor and screenwriter. He has been an actor, director and screenwriter, respectively for TV shows, theater plays and feature films. In 2018, Aslam made his digital debut in the web-series Smoke.