Sagan is a coined word with a couple of meanings behind it. One of its homophones is sandstone (砂岩, sagan) in Japanese. This symbolises many small elements uniting to form one formidable object, for example as a metaphor for a team. Also, Sagan Tosu can be interpreted as "Tosu of Saga (Prefecture)" (佐賀ん鳥栖, Saga-n Tosu) in the area's dialect.

In February 1997, Sagan was established as a new club which virtually takes over Tosu Futures, which became insolvent in the previous month, and admitted to participate Japan Football League from 1997 to 1998, as well as J. League Cup in 1997 as a preferential measure, although J. League Associate Membership status is not awarded to Sagan. In 1999 they were admitted to the new J. League Division 2 (J2) as the original ten teams, where they remained until their promotion to J1 at the end of the 2011 season. Things have changed and started to turn positive with the new President & Chief Operating Officer Minoru Takehara, who is also part owner of the club. [1]

In their first season at the J. League Division 1 in 2012, confounding the prediction of many critics about their immediate relegation to J2, they have been maintaining their position between 5th and 11th places all the way through the season, only except after the 2nd week in which they were ranked as 13th. They were ranked third after the 33rd week, having a chance to qualify for the 2013 AFC Champions League if they would not lose to Yokohama F. Marinos in the last match of the 2012 season. However, they have lost to Yokohama 0–1 then ended up in 5th, while Urawa Red Diamonds defeated Nagoya Grampus and ranked in 3rd. They also became the first club in Asia to sign a partnership with Warrior Sports [2] who also sponsors English side Liverpool FC and others.

In 2014, the club have been in the most successful season in J. League Division 1, as being ranked on the top of 2014 J. League Division 1 after the 1st, 2nd, 13th, and 18th week. However, the club made an announcement on 8 August, several days after the 18th week match when Sagan moved back to the top of the league, to terminate the contract with the head coach Yoon Jung-Hwan as of 7 August all by sudden. [4] In 2014, they continued on its international expansion and initiated a relationship with Italian side Juventus FC for its Juventus Under-16 Japan Tour 2014. [5] On July 10th, 2018, the club reached an agreement with former World Cup, UCL and Europa League winner, Fernando Torres. The aging star would play 35 games for the side netting 5 goals before finally hanging up his boots on his star studded career.

Tosu Station is a railway station in Tosu, Saga Prefecture, Japan. It is the junction between the Kagoshima Main Line and the Nagasaki Main Line.

Ekimae Real Estate Stadium is a football stadium in Tosu, Saga, Japan. It serves as a home ground of J1 League club Sagan Tosu. The stadium holds 24,130 people and was built in 1996.

Tosu Futures was a Japanese football club that played in the former Japan Football League between 1994 and 1996. 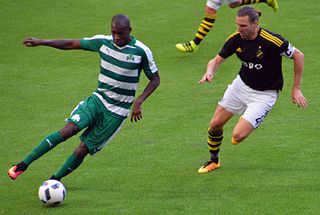 Segundo Víctor Ibarbo Guerrero is a Colombian footballer who plays as a winger or forward for Japanese side V-Varen Nagasaki.

Megumu Yoshida is a former Japanese football player and manager. 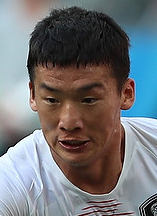 Kim Min-woo is a South Korean football player who is currently playing for Suwon Samsung Bluewings.

Yuji Takahashi is a Japanese footballer who plays as a centre back for Kashiwa Reysol.

Karlo Bručić is a Croatian professional footballer who plays as a left back for Greek club Apollon Smyrnis.

An Yong-woo is a South Korean footballer who last played as a forward for Sagan Tosu.

Jung Seung-hyun is a South Korean footballer who plays as defender for Gimcheon Sangmu (army). He won two the AFC Champions League with Kashima Antlers and Ulsan Hyundai.

Daichi Kamada is a Japanese professional footballer who plays as a midfielder for Bundesliga club Eintracht Frankfurt and the Japan national team.

Akito Fukuta is a Japanese football player for Albirex Niigata.

Kyosuke Tagawa is a Japanese professional footballer who plays as a midfielder for FC Tokyo in the J1 League.

Shuhei Sasahara is a Japanese former footballer who played as a defender.

Ryo Wada is a Japanese football player who plays for Sagan Tosu.