Panja Sai Dharam Tej (born 15 October 1986) is an Indian film actor who works in Telugu films. He made his debut as a lead in the film Pilla Nuvvu Leni Jeevitham (2014) for which he received SIIMA Award for Best Male Debut.

Sai Dharam Tej was born to Vijaya Durga, sister of notable Telugu film actor-politician Chiranjeevi. [4] Tej did his schooling at Nalanda School, Hyderabad and completed his graduation from St. Mary's College, Hyderabad. [5] Actors Ram Charan, Varun Tej and Niharika Konidela are Tej's cousins. He has a younger brother Vaisshnav Tej who is also an actor. [6]

Tej made his debut with the film Pilla Nuvvu Leni Jeevitham (2014), though he shot for YVS Chowdary's Rey earlier, which was completed in 2013 but delayed until 2015. [7] In the same year, he was featured in Subramanyam for Sale , which was a commercial success. Tej's Supreme which released the following year, was also financially successful.

Following Supreme, Tej went onto star in six other films which were a string of failures, including Thikka (2016), Winner, Nakshatram, Jawaan (in 2017), Inttelligent and Tej I Love You (in 2018). [8] [9] His 2019 film Chitralahari was a box office success. [10] One critic from The Times of India had called the character Vijay in the film the best in Tej's career so far. [11] His next film in the same year, Prati Roju Pandage was also successful. [12]

Yalamanchili Venkata Satyanarayana Chowdary is an Indian Telugu cinema writer, director, producer, distributor, exhibitor and a music company owner. He made his debut as a director in 1998 with the film Sri Sita Ramula Kalyanam Chootamu Raarandi produced by Akkineni Nagarjuna under the banner "Great India Entertainments". He then directed Seetharama Raju starring Nagarjuna and Nandamuri Harikrishna, and Yuvaraju starring Mahesh Babu. He then established his own production house "Bommarillu Vari" and started producing his own directorial efforts with Lahiri Lahiri Lahirilo. Later, he directed Seetayya, Devadasu, Okka Magaadu, Saleem, Rey. Among these, Saleem is the only film which is not from his production house. He has directed nine films till date. In 2012, he produced Nippu starring Ravi Teja and Deeksha Seth under the direction of Gunasekhar.

Konidela Nagendra Babu, better known as Naga Babu, is an Indian actor and producer associated with the Telugu film industry.

Regina Cassandra is an Indian actress who primarily appears in Tamil and Telugu films. She won the SIIMA Award for Best Female Debut – Telugu for her role in Siva Manasulo Sruthi (2012).

Raashi Khanna is an Indian actress and singer who predominantly works in Telugu and Tamil language film industries. She made her acting debut in a supporting role with the Hindi film Madras Cafe (2013) and subsequently made her debut as a female lead in Telugu with Oohalu Gusagusalade (2014), in Tamil with Imaikkaa Nodigal (2018) and in Malayalam with Villain (2017). 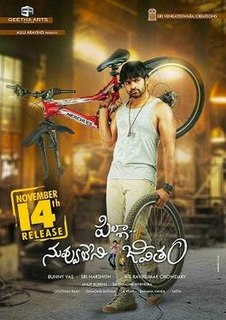 Pilla Nuvvu Leni Jeevitam is a 2014 Telugu romantic action comedy film directed by A.S. Ravi Kumar Chowdary, jointly produced by Bunny Vas and Harishith on Geetha Arts and Sri Venkateswara Creations banner. Starring Sai Dharam Tej, Regina Cassandra, Jagapathi Babu and music was composed by Anoop Rubens. The film is the first release of Sai Dharam Tej as the hero. The title was taken from one song of a Gabbar Singh film. The movie opened to positive to mixed reviews from critics and was a hit at the box office.

Duvvasi Mohan is a Telugu comedian. He is from Jagityal. He entered Tollywood as a producer and financier, but later turned to acting with comedy roles in over 350 films. 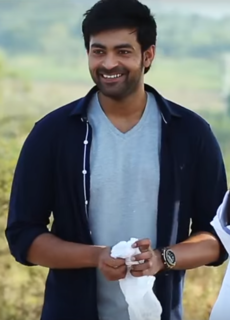 Varun Tej is an Indian actor who works in Telugu films. He made his debut as a lead in the film Mukunda (2014). He later starred in the critically acclaimed war film Kanche (2015), directed by Krish. He then went on to appear in commercially successful films such as Fidaa (2017), Tholi Prema (2018), F2: Fun and Frustration (2019) and Gaddalakonda Ganesh (2019).

Niharika Konidela is an Indian actress and television presenter who predominantly works in Telugu films. She made her debut with the film Oka Manasu (2016). She also produces under her banner "Pink Elephant Pictures".

Oka Manasu is a 2016 Telugu film written and directed by Rama Raju V Gottimukkala. It features Naga Shourya and Niharika Konidela in the lead roles, which marks Niharika's debut in Telugu cinema. The film was released worldwide on 24 June 2016.

Anupama Parameswaran is an Indian actress who predominantly appears in Telugu and Malayalam language films. She is best known for her debut role as Mary George in the Malayalam film Premam (2015). She played lead roles in Telugu films such as Sathamanam Bhavati (2017) and Vunnadhi Okate Zindagi (2017) and in Tamil film Kodi (2016)and in Kannada movie natasarvabovma(2019).

Chitralahari is a 2019 Indian Telugu-language comedy-drama film written and directed by Kishore Tirumala and produced by Mythri Movie Makers. The film stars Sai Dharam Tej, Kalyani Priyadarshan, and Nivetha Pethuraj, while Sunil, Vennela Kishore, Posani Krishna Murali, and Brahmaji, among others, play supporting roles. The music was composed by Devi Sri Prasad with cinematography by Karthik Ghattamaneni and editing by A. Sreekar Prasad. The film released on 12 April 2019.

Uppena is a 2021 Indian Telugu-language romantic drama film written and directed by debutant Buchi Babu Sana. The film is produced by Sukumar in collaboration with Naveen Yerneni and Y. Ravi Shankar, under their respective banners Sukumar Writings and Mythri Movie Makers. The film features debutants Panja Vaisshnav Tej and Krithi Shetty in the lead roles, with Vijay Sethupathi playing a prominent role. Set near Kakinada of 2002, the plot follows Aasi (Tej), a fisherman who falls in love with Bebamma (Shetty). Her father Raayanam (Sethupathi) is an influential zamindar, who fiercely protects his daughter to safeguard his family's honour.

Prati Roju Pandage is a 2019 Indian Telugu-language comedy-drama film written and directed by Maruthi Dasari. The film was produced by Bunny Vas under UV Creations and GA2 Pictures with Sai Dharam Tej, Rashi Khanna, Sathyaraj and Rao Ramesh in lead roles. The technical crew includes Jaikumar behind the camera, S. Thaman composing music and Kotagiri Venkateswara Rao handling editing duties. The movie depicts the relationship between a grandson and his grandfather and on how the society treats old people.

Allu–Konidela family, colloquially Mega family, is an Indian film family known for their work in Telugu cinema. Prominent heads of the family are comic actor Allu Ramalingaiah and his son-in-law, notable actor-politician Chiranjeevi.

SIIMA Award for Best Male Debut - Telugu is presented by Vibri media group as part of its annual South Indian International Movie Awards, for the best acting done by an actor in a leading role in his debut Telugu film. The award was first given in 2012 for films released in 2011.

Panja Vaisshnav Tej is an Indian actor who works in Telugu films. He made his debut as a lead in the film Uppena (2021).