In February 2020, Saigon announced a cooperation agreement with Japanese club FC Tokyo, which includes plans for a joint football academy being started in Vietnam. [2]

Saigon has played at Thong Nhat Stadium in District 10, Ho Chi Minh City since the club was founded in 2016.

In 2020, the club purchased the Thanh Long Sports Center in District 8, Ho Chi Minh City. The proposed Saigon Football Academy that they will jointly operate with FC Tokyo will be based out of this location. [5]

Ho Chi Minh City, formerly known as Saigon, is the largest city in Vietnam. Located in Southern Vietnam, the city surrounds the Saigon River and covers about 2,061 km2 (796 sq mi).

Thống Nhất Stadium is a multi-purpose stadium in Ho Chi Minh City, Vietnam. It is located at 138 Đào Duy Từ Street, Ward 6, District 10. It is currently used mostly for football matches and is the home stadium for both Sài Gòn F.C. and Thành phố Hồ Chí Minh of the V.League 1. The stadium has a capacity to seat 15,000.

Long Thanh International Airport is an international airport currently under construction in Long Thanh, Dong Nai, Vietnam. Located approximately 40 km (25 mi) east of Ho Chi Minh City, it has been approved to start construction by the Vietnamese government on January 4, 2021, and the Vietnamese government has decided to begin construction on January 5, 2021 and it will be finished by 2025. It will serve over 100 million passengers annually when built to the maximum designed capacity. The project is the most expensive infrastructure project in Vietnam's history. It will replace Tan Son Nhat International Airport as the city’s main airport. 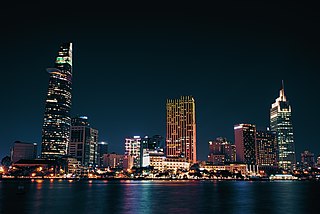 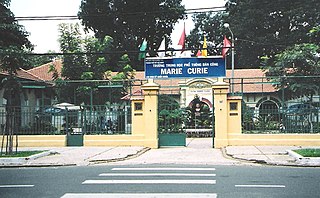 Navibank Sài Gòn Football Club was a Vietnam professional football club based in Ho Chi Minh City, active from 2009 to 2012.

Quân khu 7 Stadium is a stadium in Tan Binh District, near Tan Son Nhat International Airport, Ho Chi Minh City. It has a capacity of around 25,000 people.

Xuan Thanh Saigon Cement was a Vietnam professional football club based in Ho Chi Minh City, active from 2010 to 2013.

The 2021 V.League 1 was the 65th professional season of the top-flight football league in Vietnam.

The 2021 Vietnamese National Cup was the 29th edition of the Vietnamese Cup, the football knockout competition of Vietnam organized by the Vietnam Football Federation.

The 2022 V.League 1 is the 66th professional season of the top-flight football league in Vietnam. The season started on 25 February 2022.