Saint-Pardoux-la-Rivière (Occitan: Sent Pardol la Ribiera) is a commune in the Dordogne department in Nouvelle-Aquitaine in southwestern France. It forms part of the Parc naturel régional Périgord Limousin.

Saint-Pardoux-la-Rivière is surrounded by the following communes:

Besides the village center the commune of Saint-Pardoux-la-Rivière comprises the following hamlets:

The commune's territory is traversed roughly centrally by the River Dronne. The northern boundary to Champs-Romain is formed by the river, which is occupying a narrow canyon. After initially following a southwesterly direction it then swings to the south. Before reaching the village the valley widens. Alongside a ford over the river Saint-Pardoux was founded.

A right tributary of the Dronne, the Ruisseau de Lachenaud, forms the western continuation of the northern boundary to Champs-Romain. Its course is directed to the southeast. Near the center of Saint-Pardoux the Dronne receives a left tributary, the Ruisseau de Chantres.

The commune's territory is divided into two contrasting domains by two crossing fault lines (N 065 and N 160). To the north and east of these faults one encounters the Variscan basement rocks of the northwestern Massif Central, which also stand out topographically. The southern lowlands around the village center are occupied by sediments of the northern Aquitaine Basin. Along the border faults the basement rocks were raised relative to the sedimentary cover.

The oldest unit of the basement rocks are Neoproterozoic micaschist of the Parautochthonous Micaschist Unit (PMU). They can be seen in the east near Chantres and Le Châtenet. They were intruded during the Pennsylvanian by the Saint-Mathieu Leucogranite. The leucogranite crops out in the upper reaches of the Dronne valley. To the north of the N 065-striking fault the basement rocks consist of Plagioclase-bearing paragneisses. In some places these are intruded by small granodiorite bodies belonging to the Piégut-Pluviers Granodiorite or by leptynites of Ordovician age.

The flatlying sediments surrounding the village center are mainly of Jurassic age and comprise Lias as well as Dogger limestones. The Lias is composed of Hettangian (sandstones, coarse sandstones and conglomerates), Sinemurian (oolithic limestones, sometimes dolomitic) and Toarcian (claystones and grey marls). Near the border faults the Lias can be silicified. The Toarcian clays were once quarried by a (now redundant) tile factory. The Dogger consists of cryptocrystalline limestones, bioclastic limestones and oolithic limestones spanning the period Upper Bajocian and Bathonian. Close to the border faults crop out the so-called sidérolithique (iron-rich, reddish, clayey sands) and solidified, conglomeratic alluvial deposits. Both formations are most likely of Eocene age. All the aforementioned sedimentary units can be covered by colluvial gravels of Pleistocene age. In the Dronne valley gravelly terrasses belonging to the Mindel stage and the Würm stage can be observed. Limestone debris mantelling certain hillslopes is due to gelifraction processes during the last ice age.

Worth mentioning are certain mineral occurrences like silver-bearing galena in the paragneisses or baryte mainly within the Lias. Occasional tourmaline can also be found in the paragneisses. Manganese (manganese dioxide) associated with nontronite was once mined near Le Mandereau. The Neuil mine, situated in the paragneisses, contains apart from galena and baryte the minerals chalcopyrite, gypsum, marcasite, pyrite, pyromorphite and sphalerite.

Between the 13th century and the French Revolution there was once a monastery in Saint-Pardoux-la-Rivière. Hardly anything is left of it now, because most of its building stones were used in the construction of the village. The church goes back to the 17th and 18th centuries. It underwent extensive renovation during the 19th century with the steeple being completely rebuilt. The Château de Vaugoubert at the Dronne also goes back to the 17th century. From an even older castle only the round tower is left.

The population of Saint-Pardoux-la-Rivière has decreased continuously till 1999 (25% decrease), but seems to recover somewhat since then.

Mayor of Saint-Pardoux-la-Rivière is since 2001 Maurice Combeau, a pensioner who is not affiliated with any political party.

Saint-Martin-le-Pin is a commune in the Dordogne department in Nouvelle-Aquitaine in southwestern France. It is part of the Regional Natural Park Périgord Limousin. 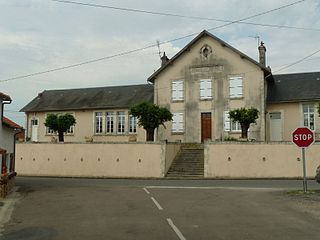 Ambernac is a commune in the Charente department in the Nouvelle-Aquitaine region of south-western France. 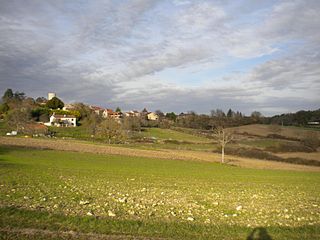 La Gonterie-Boulouneix is a former commune in the Dordogne department in Nouvelle-Aquitaine in southwestern France. On 1 January 2019, it was merged into the commune Brantôme en Périgord.

Saint-Front-la-Rivière is a commune in the Dordogne department in Nouvelle-Aquitaine in southwestern France.

Saint-Paul-la-Roche, is a commune in the northeast of the Dordogne department in the Nouvelle-Aquitaine region in southwestern France. The commune is integrated into the Regional Natural Parc Périgord Limousin.

The Côle is a 51.5 km (32.0 mi) long river in the Dordogne département, south-central France. It rises near le Châtenet, a hamlet in Firbeix. It flows generally southwest. It is a left tributary of the Dronne into which it flows between Condat-sur-Trincou and Brantôme.

The Parc naturel régional Périgord Limousin was created March 9, 1998. It consists of 78 communes situated in the Dordogne and Haute Vienne départements. The park has a surface area of 1,800 square kilometers and is inhabited by 49,661 people.

The Piégut-Pluviers Granodiorite is situated at the northwestern edge of the Variscan Massif Central in France. Its cooling age has been determined as 325 ± 14 million years BP. 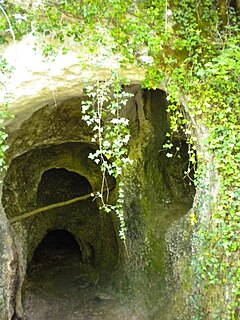 Rochereil is a prehistoric cave near Lisle in the French département Dordogne. Besides around 4000 stone and bone artifacts it contained the tomb of an adult human, the perforated skull of a two-year-old child and fossilized bones of two adolescent individuals.

The Neuil Mine, in French Mine de Neuil, is a mine emplaced in paragneisses of the northwestern Massif Central. The mine is part of the commune of Saint-Pardoux-la-Rivière in the Dordogne. Extracted from the mine was galena, slightly enriched in silver.

The le Puy Mine is an ancient lead mine in the northwestern Massif Central, France. The mine produced mainly silver-bearing galena.

The Merlis Serpentinites are an aligned group of small serpentinite outcrops in the northwestern French Massif Central. Their parent rocks were peridotites from the upper mantle.

The Saint-Mathieu dome is a dome-like upwarp in the metamorphic basement of the northwestern French Massif Central. It exposes a very deep and normally hidden parautochthonous unit at the surface.

The canton of Périgord Vert Nontronnais is an administrative division of the Dordogne department, southwestern France. It was created at the French canton reorganisation which came into effect in March 2015. Its seat is in Nontron.

Guyana belongs to the Guiana Shield, a massif extending north of the Amazon, between the Andes Mountains and the Atlantic, made up of Precambrian rocks dated to between 2.7 and 3.5 billion years ago. The shield consists of several geological units: the southern peneplain, the Inini synclinorium, the central granite massifs and the northern synclinorium. The southern peneplain consists of a set of granito-gneiss consisting of metagabbros, metagranodiorites and metagranites dating from 2075 ± 7 Ma from a magma of metamorphosed mantle origin. To the north, the southern peneplain straddles the Inini synclinorium, mainly composed of the Paramaca series, which corresponds to a series of micaschists, aluminous paragneisses and black quartzites whose total thickness is about 1 km. The central granite massifs consist of granite plutons, granodiorites and quartz diorites dating from 2.05 to 2.15 billion years ago. The north of French Guiana corresponds to a synclinorium composed of the Paramaca series on which sandstone and fluviatile conglomerates lie unconformably. Shield rocks in Guyana are all dated between 1.6 and 2.5 billion years ago.