Saint Dominic in Soriano (Italian : San Domenico in Soriano; Spanish : Santo Domingo en Soriano) was a portrait of Saint Dominic (1170–1221) painted in 1530. It is an important artefact in the Dominican friary at Soriano Calabro in southern Italy. It was believed to be of miraculous origin, and to inspire miracles. It was the subject of a Roman Catholic feast day celebrated on 15 September from 1644 to 1913. Its miraculous origin was the subject of several 17th-century paintings. Several ecclesiastical buildings have been named after it.[ which? ][ citation needed ]

In the early 17th century, Silvestro Frangipane, a Dominican, investigated the painting and wrote a book about it. Several senior members of his Order gave it their imprimaturs , and it was published in 1634. [1] : Title page and four unnumbered pages

It happened that, during the night before the octave of the Nativity of the Madonna, [Note 1] in the Year of Our Lord 1530, the sacristan of Soriano had risen, as was his custom, at 3 o'clock in the morning to light the church lamps. Three ladies of wonderful appearance, the first of whom seemed much afflicted by grief, finding the door unlocked, entered. Their leader, her grief turning into joy, asked, “What church might this be?” The sacristan replied, “This church is dedicated to Saint Dominic. We have no paintings on the walls, except for that crude depiction of him behind the altar.” The venerable matron said, “So that your church may have another icon, take this and give it to your superior. Then, tell him to place it above the altar.” With great reverence, the sacristan accepted the gift and brought it to his superior. When the superior and two other brothers came to the church, the ladies were nowhere to be seen. One of them later said, “While I knelt in prayer, Saint Catherine the Virgin appeared to me and said: I, together with the Virgin Mother of God and the Magdalene, have conferred this favour upon you.” [1] : 58–60

That narrative is largely the one accepted by the Dominican Order today. [2]

The portrait soon acquired a reputation for having marvellous properties. According to Fra Frangipane, if it was ever hung in a place other than the one specified by the Virgin Mary, the following morning it would be back in its proper place. [1] : 63–65  He described numerous other miracles attributed to its presence. [1] : 65–235  No fewer than 1,600 miracles were reliably attributed to its presence within a space of 78 years.[ citation needed ] In 1644, Pope Innocent XII ordained a feast day on 15 September to commemorate its origin and properties. [2] [Note 2] The feast may have been suppressed in 1913, when Pope Pius X moved what had until then been the movable feast of Our Lady of Sorrows to the fixed date of 15 September. [3] [Note 3]

The more recent history of the portrait seems to be unknown.[ citation needed ] Soriano Friary was badly damaged by an earthquake in 1659  [ it ] of 6.6 magnitude. [4] It was rebuilt; but in 1783, Calabria was struck by a series of five earthquakes within two months. The first, on 5 February, was of 7.0 magnitude, and levelled Soriano to the ground. [5] The third, on 7 February, was of 6.6 magnitude, and its epicentre was 3 km from Soriano. [6] [7] In Soriano itself, 171 people had died, and damage estimated at 80,000 ducats had been caused. [8] The friary was rebuilt for a second time, but seems never to have regained its earlier reputation; it seems to disappear from the records.[ citation needed ] The portrait may have failed to survive one of those events. [Note 4] [ original research? ]

A description of the painting

And the figure in that Picture, which is five palms high and four broad, [Note 5] in his right hand holds a book, and in his left a lily, is of medium stature, of handsome aspect, but venerable, and mortified, with somewhat sharply defined features; his nose is aquiline; his hair is mostly white; and the rest, like that of his beard, reddish; his face is very white, as if he was at one with pallidity: his eyes are most serene, and follow you everywhere you go, inducing a mild feeling of terror: his garments and habit do not extend down to his heels, thus displaying his feet clad in black shoes: and, in conclusion, the whole Picture exhibits nothing but celestial, and divine, workmanship.

The miraculous origin of the portrait seems to have been a significant topic for religious art in 17th-century Italy and Spain, as evidenced by the number of paintings described later in this section. It is uncertain which, if any, of the painters had seen the original. Those paintings are consistent in showing Dominic slightly less than life-size, full length, wearing his habit, with book and lily, thus generally conforming to Fra Frangipane's 1634 description; [1] but differ in detail. They are also consistent in another way: all show the three saints exhibiting the open painting to one or more friars.

Examples (with provenance, where known) include (arranged approximately by date):

Ecclesiastical buildings named after, and so perhaps dedicated to,[ original research? ]Saint Dominic in Soriano include (arranged by date): 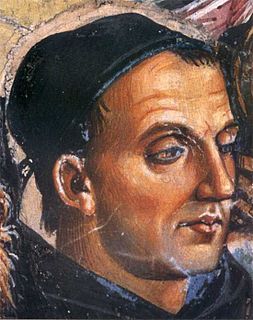 Fra Angelico was an Italian painter of the Early Renaissance, described by Vasari in his Lives of the Artists as having "a rare and perfect talent". He earned his reputation primarily for the series of frescoes he made for his own friary, San Marco, in Florence. 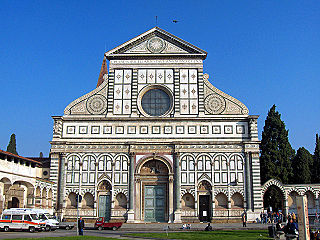 Villa Soriano is a town in the Soriano Department of Uruguay. Historically, it was also known as Santo Domingo de Soriano. It had acquired the status of "Villa" (town) before the Independence of Uruguay.

Soriano Calabro is a comune (municipality) in the Province of Vibo Valentia in the Italian region Calabria, located about 45 kilometres (28 mi) southwest of Catanzaro and about 15 kilometres (9 mi) southeast of Vibo Valentia. As of 31 December 2004, it had a population of 2,975 and an area of 15.2 square kilometres (5.9 sq mi).

The Church of Santi Domenico e Sisto is one of the titular churches in Rome, Italy in the care of the Roman Catholic Order of Preachers, better known as the Dominicans. It is located at no. 1 Largo Angelicum on the Quirinal Hill on the campus of the Pontifical University of St. Thomas Aquinas (Angelicum), of which it is the University Church.

Museo Nazionale di San Marco is an art museum housed in the monumental section of the medieval Dominican friary dedicated to St Mark, situated on the present-day Piazza San Marco, in Florence, a region of Tuscany, Italy. 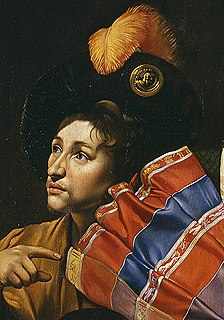 Saint Dominic or Dominic de Guzmán was the Roman Catholic founder of the order of Dominicans.

The Lamezia Terme Town Library is located in the historic centre of the former village of Nicastro and more precisely in the Nicotera-Severisio historical building located in the Tommaso Campanella square.

The Santuario del Santo Cristo, also known as the Church of San Juan del Monte is a church and convento in San Juan, Metro Manila, Philippines. The shrine was built in 1602–1604 by the Dominicans on land that was donated to the order. Both the church and convento were burnt and destroyed during the Chinese insurrection of 1639, and later rebuilt in 1641. It was again destroyed in July 1763 as Britain briefly occupied Manila during the Seven Years' War. The current church and convento were built in 1774, and used as a shelter by Katipuneros during the 1898 Philippine Revolution against the Spanish Empire. It has since been renovated many times until the 1990s.

Santa Maria del Rosario is a Catholic church in Alcamo, in the province of Trapani. 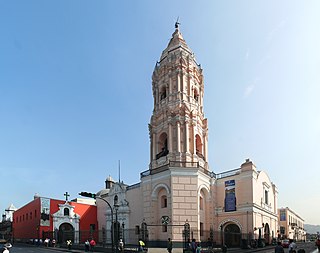