Saint Erentrude (or Erentraud; Latin : Erendruda; ? - 710 AD) is a virgin saint of the Eastern Orthodox and Roman Catholic Churches and was the niece of Saint Rupert of Salzburg. She was installed as the first abbess of Nonnberg Abbey at Salzburg, Austria.

Her date and place of birth are unknown, but it may be presumed that she was born in present-day Germany or Austria, in the latter part of the 7th century. She followed her uncle from Worms to Salzburg, where she was installed by him as the first abbess of Nonnberg Abbey. She died on 30 June 710, the same year as Saint Rupert. [1]

Her relics are in the crypt of St Mary's church, not far from her convent. Her feast is kept on June 30, and September 4 commemorates the translation of her relics. [1]

Saint Erentrude was selected as the main motif for the Austrian Nonnberg Abbey commemorative coin minted on April 5, 2006. This was the first coin of the series "Great Abbeys of Austria". The reverse side shows the crypt dedicated to Erentrude in Nonnberg Abbey, with a statue of the saint. [1]

Hedwig of Silesia, also Hedwig of Andechs, a member of the Bavarian comital House of Andechs, was Duchess of Silesia from 1201 and of Greater Poland from 1231 as well as High Duchess consort of Poland from 1232 until 1238. She was reported in the two-volume historical atlas of Herman Kinder and another author to have been great in war and defended from the Teutonic Knights. She was canonized by the Catholic Church in 1267 by Pope Clement IV. 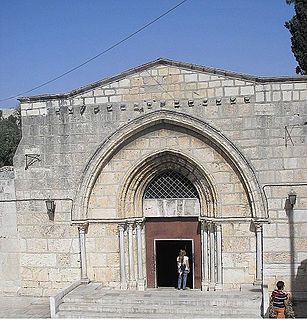 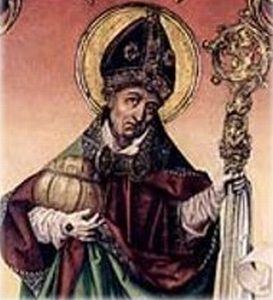 Rupert of Salzburg was Bishop of Worms as well as the first Bishop of Salzburg and abbot of St. Peter's in Salzburg. He was a contemporary of the Frankish king Childebert III. As bishop at Worms, Rupert was at first accepted as a wise and devout dignitary, however, the mostly pagan community eventually came to reject him and forced him out of the city. By the end of the 7th century, the Agilolfing duke Theodo of Bavaria requested that he come to his residence at Regensburg (Ratisbon) to help spread the Christian faith among the Bavarian tribes. Rupert is venerated as a saint in the Roman Catholic and Eastern Orthodox Churches. Rupert is also patron saint of the Austrian state of Salzburg.

Salzburg Cathedral is the seventeenth-century Baroque cathedral of the Roman Catholic Archdiocese of Salzburg in the city of Salzburg, Austria, dedicated to Saint Rupert and Saint Vergilius. Saint Rupert founded the church in 774 on the remnants of a Roman town, the cathedral was rebuilt in 1181 after a fire. In the seventeenth century, the cathedral was completely rebuilt in the Baroque style under Prince-Bishop Wolf Dietrich von Raitenau to its present appearance. Salzburg Cathedral still contains the baptismal font in which composer Wolfgang Amadeus Mozart was baptized. 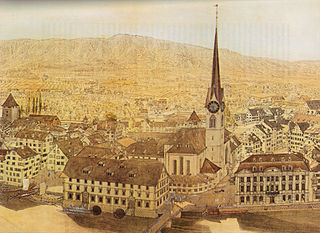 The Fraumünster is a church in Zürich which was built on the remains of a former abbey for aristocratic women which was founded in 853 by Louis the German for his daughter Hildegard. He endowed the Benedictine convent with the lands of Zürich, Uri, and the Albis forest, and granted the convent immunity, placing it under his direct authority. Today, it belongs to the Evangelical Reformed Church of the canton of Zürich and is one of the four main churches of Zürich, the others being the Grossmünster, Prediger and St. Peter's churches. 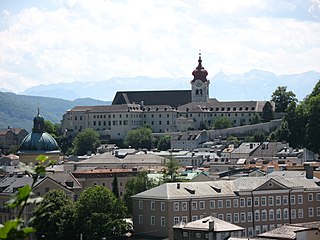 Nonnberg Abbey is a Benedictine monastery in Salzburg, Austria. Founded c. 712/715 by Saint Rupert of Salzburg, it is the oldest continuously existing nunnery in the German-speaking world. The monastery complex is today a protected monument and part of the Historic Centre of the City of Salzburg, a UNESCO World Heritage Site since 1996.

Hemma of Gurk, also called Emma of Gurk, was a noblewoman and founder of several churches and monasteries in the Duchy of Carinthia. Buried at Gurk Cathedral since 1174, she was beatified on 21 November 1287 and canonised on 5 January 1938 by Pope Pius XI. Her feast day is 27 June. Hemma is venerated as a saint by both the Catholic Church and the Eastern Orthodox Church, and as patroness of the current Austrian state of Carinthia.

Ælfthryth, also known as Alfreda,Alfritha, Aelfnryth, or Etheldritha, is a saint, virgin, and recluse, venerated in both the Roman Catholic Church and Antiochian Orthodox Church. She was a daughter of King Offa of Mercia and his consort, Cynethryth. 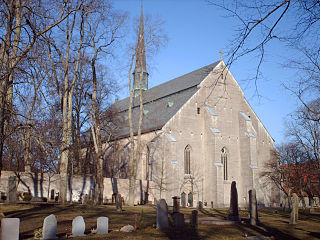 The Abbey of Our Lady and of St. Bridget, more commonly referred to as Vadstena Abbey, situated on Lake Vättern in the Diocese of Linköping, Sweden, was the motherhouse of the Bridgettine Order. The abbey started on one of the farms donated to it by the king, but the town of Vadstena grew up around it. It was active from 1346 until 1595.

Saints Victor and Corona are two Christian martyrs. Victor was a Roman soldier who was tortured and killed; Corona was killed for comforting him. Corona is venerated in connection with treasure-hunting and, since 2020, with the 2020 coronavirus pandemic.

Saint Altfrid was a leading figure in Germany in the ninth century. A Benedictine monk, he became Bishop of Hildesheim, and founded Essen Abbey. He was also a close royal adviser to the East Frankish King Louis the German.

St. George's Abbey is a monastic complex in the village of Sankt Georgen am Längsee, Carinthia, Austria. It celebrated its 1,000th anniversary in 2003.

Virgilia Lütz was a German Catholic nun who is known for being the reigning Abbess of Nonnberg Abbey from 1921 until her death in 1949. She is known for her association with Maria von Trapp during the latter's time as a postulant at Nonnberg.

St. Agilberta, also known as Aguilberta of Jouarre and Gilberta of Jouarre, is a Benedictine French saint, venerated in both the Roman Catholic Church and Antiochian Orthodox Church. She was a nun and the second abbess of the Jouarre Abbey, in the département of Seine-et-Marne. Agilberta was a relative of Saints Ebrigisil and Ado, who founded Jouarre in 660. Her brother, St. Agilbert, was bishop of Paris. Agilberta's sister, St. Balda, was Jouarre's third abbess.