Matthias (Koine Greek: Μαθθίας, Maththías [maθˈθi.as] , from Hebrew מַתִּתְיָהוּ Mattiṯyā́hū; Coptic : ⲙⲁⲑⲓⲁⲥ; died c. AD 80) was, according to the Acts of the Apostles (written c. AD 80–90), chosen by the apostles to replace Judas Iscariot following the latter's betrayal of Jesus and his subsequent death. [1] His calling as an apostle is unique, in that his appointment was not made personally by Jesus, who had already ascended into heaven, and it was also made before the descent of the Holy Spirit upon the early Church.

There is no mention of a Matthias among the lists of disciples or followers of Jesus in the three synoptic gospels, but according to Acts, he had been with Jesus from his baptism by John until his Ascension. In the days following, Peter proposed that the assembled disciples, who numbered about 120, nominate two men to replace Judas. They chose Joseph called Barsabas (whose surname was Justus) and Matthias. Then they prayed, "Thou, Lord, which knowest the hearts of all [men], shew whether of these two thou hast chosen, That he may take part of this ministry and apostleship, from which Judas by transgression fell, that he might go to his own place." [Acts 1:24–25] Then they cast lots, and the lot fell to Matthias; so he was numbered with the eleven apostles. [2]

No further information about Matthias is to be found in the canonical New Testament. Even his name is variable: the Syriac version of Eusebius calls him throughout not Matthias but "Tolmai", not to be confused with Bartholomew (which means Son of Tolmai), who was one of the twelve original Apostles; Clement of Alexandria refers once to Zacchaeus in a way which could be read as suggesting that some identified him with Matthias; [3] the Clementine Recognitions identify him with Barnabas; Hilgenfeld thinks he is the same as Nathanael in the Gospel of John.

The tradition of the Greeks says that St. Matthias planted the faith about Cappadocia and on the coasts of the Caspian Sea, residing chiefly near the port Issus. [4]

According to Nicephorus (Historia eccl., 2, 40), Matthias first preached the Gospel in Judaea, then in Aethiopia (by the region of Colchis, now in modern-day Georgia) and was there stoned to death. [2] An extant Coptic Acts of Andrew and Matthias, places his activity similarly in "the city of the cannibals" in Aethiopia. [lower-alpha 1] [5] A marker placed in the ruins of the Roman fortress at Gonio (Apsaros) in the modern Georgian region of Adjara claims that Matthias is buried at that site.

The Synopsis of Dorotheus contains this tradition: "Matthias preached the Gospel to barbarians and meat-eaters in the interior of Ethiopia, where the sea harbor of Hyssus is, at the mouth of the river Phasis. He died at Sebastopolis, and was buried there, near the Temple of the Sun." [2]

Alternatively, another tradition maintains that Matthias was stoned at Jerusalem by the local populace, and then beheaded (cf. Tillemont, Mémoires pour servir à l'histoire ecclesiastique des six premiers siècles, I, 406–7). According to Hippolytus of Rome, Matthias died of old age in Jerusalem.

Not that they became apostles through being chosen for some distinguished peculiarity of nature, since also Judas was chosen along with them. But they were capable of becoming apostles on being chosen by Him who foresees even ultimate issues. Matthias, accordingly, who was not chosen along with them, on showing himself worthy of becoming an apostle, is substituted for Judas.

Surviving fragments of the lost Gospels of Matthias [6] attribute it to Matthias, but Early Church Fathers attributed it to heretical writings in the 2nd century.

The feast of Saint Matthias was included in the Roman Calendar in the 11th century and celebrated on the sixth day to the Calends of March (24 February usually, but 25 February in leap years). In the revision of the General Roman Calendar in 1969, his feast was transferred to 14 May, so as not to celebrate it in Lent but instead in Eastertide close to the Solemnity of the Ascension, [7] the event after which the Acts of the Apostles recounts that Matthias was selected to be ranked with the Twelve Apostles.

It is claimed that St Matthias the Apostle's remains were brought to Italy through Empress Helena, mother of Emperor Constantine I (the Great); part of these relics would be interred in the Abbey of Santa Giustina, Padua, and the remaining in the Abbey of St. Matthias, Trier, Germany. According to Greek sources, the remains of the apostle are buried in the castle of Gonio-Apsaros, Georgia.[ citation needed ] [13] 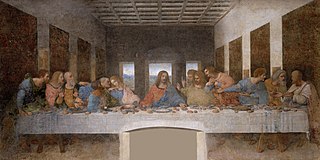 The Last Supper is the final meal that, in the Gospel accounts, Jesus shared with his apostles in Jerusalem before his crucifixion. The Last Supper is commemorated by Christians especially on Maundy Thursday. The Last Supper provides the scriptural basis for the Eucharist, also known as "Holy Communion" or "The Lord's Supper". 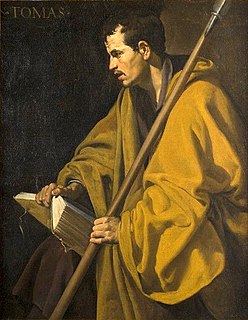 Thomas the Apostle, also called Didymus ("twin") was one of the Twelve Apostles of Jesus according to the New Testament. Thomas is commonly known as "Doubting Thomas" because he doubted Jesus' resurrection when first told of it ; later, he confessed his faith on seeing Jesus' crucifixion wounds. 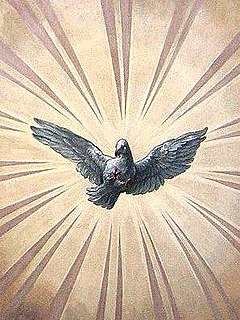 The Christian holiday of Pentecost is a moveable feast, which is celebrated on the 50th day from Easter Sunday. It commemorates the descent of the Holy Spirit upon the Apostles and other followers of Jesus Christ while they were in Jerusalem celebrating the Feast of Weeks, as described in the Acts of the Apostles.

Good Friday is a Christian holiday commemorating the crucifixion of Jesus and his death at Calvary. It is observed during Holy Week as part of the Paschal Triduum. It is also known as Holy Friday, Great Friday, Great and Holy Friday, and Black Friday. 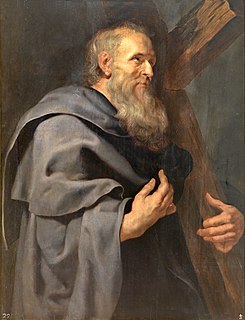 Philip the Apostle was one of the Twelve Apostles of Jesus according to the New Testament. Later Christian traditions describe Philip as the apostle who preached in Greece, Syria, and Phrygia.

Silas or Silvanus was a leading member of the Early Christian community, who first accompanied Paul the Apostle on his second missionary journey.

Maundy Thursday or Holy Thursday is the day during Holy Week that commemorates the Washing of the Feet (Maundy) and Last Supper of Jesus Christ with the Apostles, as described in the canonical gospels. 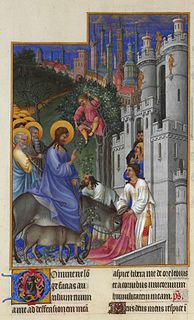 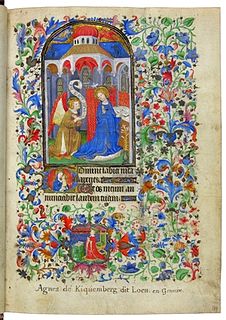 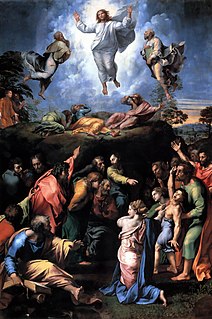 In the New Testament, the Transfiguration of Jesus is an event where Jesus is transfigured and becomes radiant in glory upon a mountain. The Synoptic Gospels describe it, and the Second Epistle of Peter also refers to it. It has also been hypothesized that the first chapter of the Gospel of John alludes to it. 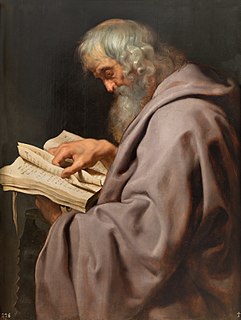 Simon the Zealot or Simon the Canaanite or Simon the Canaanean was one of the most obscure among the apostles of Jesus. A few pseudepigraphical writings were connected to him, but Saint Jerome does not include him in De viris illustribus written between 392 and 393 AD.

The Byzantine Rite, also known as the Greek Rite or the Rite of Constantinople, identifies the wide range of cultural, liturgical, and canonical practices that developed in the Eastern Orthodox Church of Constantinople. 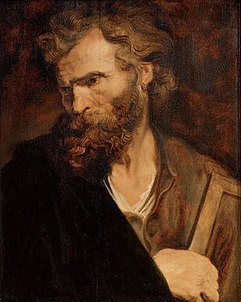 Jude was one of the Twelve Apostles of Jesus according to the New Testament. He is generally identified with Thaddeus, and is also variously called Jude of James, Jude Thaddaeus, Judas Thaddaeus or Lebbaeus. He is sometimes identified with Jude, the brother of Jesus, but is clearly distinguished from Judas Iscariot, the apostle who betrayed Jesus prior to his crucifixion. Catholic writer Michal Hunt suggests that Judas Thaddaeus became known as Jude after early translators of the New Testament from Greek into English sought to distinguish him from Judas Iscariot and subsequently abbreviated his forename. Most versions of the New Testament in languages other than English and French refer to Judas and Jude by the same name. 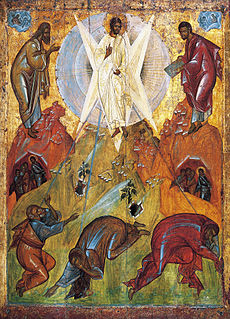 The Feast of the Transfiguration is celebrated by various Christian communities in honor of the transfiguration of Jesus. The origins of the feast are less than certain and may have derived from the dedication of three basilicas on Mount Tabor. The feast was present in various forms by the 9th century, and in the Western Church was made a universal feast on 6 August by Pope Callixtus III to commemorate the raising of the siege of Belgrade (1456).

Cornelius was a Roman centurion who is considered by Christians to be the first Gentile to convert to the faith, as related in Acts of the Apostles. The baptism of Cornelius is an important event in the history of the early Christian church. 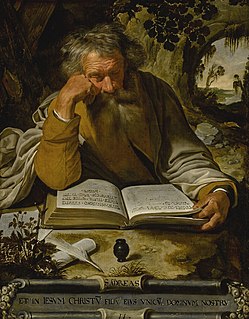 Andrew the Apostle, also called Saint Andrew, was an apostle of Jesus according to the New Testament. He is the brother of Saint Peter. He is referred to in the Orthodox tradition as the First-Called.