Salahuddin Quader Chowdhury (13 March 1949 – 22 November 2015) was a Bangladeshi politician, minister and six-term member of Jatiya Sangsad and member of the Bangladesh Nationalist Party (BNP) Standing Committee, who served as the adviser of parliamentary affairs to Prime Minister Khaleda Zia in from 2001 to 2006 [2] . On 1 October 2013 he was convicted of 9 of 23 charges and sentenced to death by the International Crimes Tribunal of Bangladesh for crimes during the 1971 Bangladesh War of Independence. [3] [4] [5] He was put to death by hanging in Dhaka on 22 November 2015. [3]

Chowdhury was born on 13 March 1949 in Gahira village. [6] He was from a political family of Raozan Upazila in erstwhile East Pakistan. His father, Fazlul Quader Chowdhury, was a Speaker of Pakistan National Assembly and Acting President of Pakistan from time to time before the independence of Bangladesh. [7] He was the eldest among the six siblings. [8] He received his education from the boarding school, Sadiq Public School at Bahawalpur, Pakistan. [7]

Chowdhury was arrested 2011 from his house to a "safe house" in Dhanmondi and questioned by the special branch of police, [13] where he was reportedly tortured. [14] The trial for his involvements in the 1971 Bangladesh genocide were due to begin in August 2011. [7]

Among the charges submitted against Chowdhury in the International Crimes Tribunal were: [15] [16]

During Chowdhury's trial the prosecution summoned 41 witnesses to testify while four were called in his defense. [3] Commenting on the trial, the former United States Ambassador-at-Large for War Crimes Issues, Stephen Rapp, said that it was "disturbing" that limitations were placed on defense testimony. [21] Affidavits stating that Chowdhury was in Pakistan and studying law at the University of Punjab at the time of the crimes were not considered. [3] [4] Defense testimony from a former prime minister of Pakistan and a former American ambassador was not allowed by the court. [22]

On 1 October 2013, the International Crimes Tribunal of Bangladesh sentenced Chowdhury to death by hanging for nine out of the 23 charges brought against him. [4] His party BNP argued that the trial is politically motivated. [23] On 18 November 2015, Bangladesh Supreme Court dismissed the appeal of Chowdhury, upholding the death sentence. [24] [25] According to jail officials, Chowdhury asked for mercy in a petition to the President of Bangladesh, but his appeal was rejected. [26] [27]

On 22 November 2015, at 12:45 in the morning, Chowdhury was executed by hanging at Dhaka Central Jail. Another convict, Ali Ahsan Mohammad Mojaheed, was also executed around the same time. [28] [29] [30] [31] Law Minister Anisul Huq claimed that Chowdhury and Mojaheed submitted a plea for mercy, which Chowdhury's family denied. [28] Chowdhury was buried at his village home in Raozan Upazila, Chittagong on 22 November 2015. [32]

Chowdhury was married to Farhat Quader Chowdhury. [33] Their children include Farzin, Hummam (b. 1983) and Fazlul. [8] [33] [34] In August 2016, Human Rights Watch and Amnesty International alleged that Hummam was arrested on 4 August 2016, and disappeared. Amnesty says multiple credible sources place him at Rapid Action Battalion (RAB) headquarters in Dhaka on 12 August, but authorities have denied having him in custody. [35] Hummam returned home in March 2017.

Chowdhury's brother, Giasuddin Quader Chowdhury, was a member of parliament from Bangladesh Nationalist Party. [36] Other two brothers were Saifuddin and Jamaluddin. [8] Industrialist brothers Salman F Rahman and Sohel Rahman were their cousins. [8] 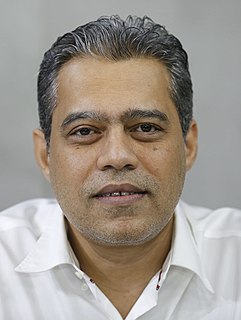 The Al-Shams was an anti-Bangladesh paramilitary wing of several Islamist parties in East Pakistan composed of local Bengalis and Muhajirs that along with the Pakistan Army and the Al-Badr, is accused of conducting a mass killing campaign against Bengali nationalists, civilians, religious and ethnic minorities during 1971. The group was banned by the independent government of Bangladesh, but most of its members had fled the country during and after the Indo-Pakistani War of 1971, which led to Bangladesh's independence.

Jail Killing Day is observed by the Awami League (AL) of Bangladesh and many other political organisations on 3 November every year. It commemorates the killing of four Awami League and national leaders: former Vice-President Syed Nazrul Islam, former Prime Minister of Bangladesh Tajuddin Ahmed and Captain (Rtd.) Mansur Ali, and former Home Minister A H M Quamruzzaman on this date in 1975.

Ali Ahsan Mohammad Mojaheed was a former Bangladeshi politician who served as a Member of Parliament and as the Minister of Social Welfare from 2001 to 2007 of Bangladesh and was convicted of war crimes during the 1971 Liberation war of Bangladesh. He received death penalty by the International Crimes Tribunal of Bangladesh on 22 November 2015, becoming one of the world's first Ministers to be hanged. He was second in command of the infamous paramilitary force, Al-Badr in 1971, which committed war crimes at that time. Until his death, he was the Secretary General of Bangladesh Jamaat-e-Islami. On 17 July 2013, Ali Ahsan Mohammad Mujaheed was found guilty of war crimes such as genocide, conspiracy in helping to kill intellectuals and abduction during the 1971 Liberation war of Bangladesh by the International Crimes Tribunal-2 and sentenced him to death for 2 of the 7 charges brought against him. High Court rejected his review petition on 18 November 2015. 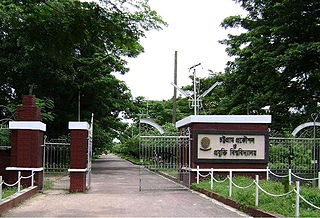 Raozan is an Upazila of Chittagong District in the Division of Chittagong, Bangladesh. It was established in 1947.

Fazlul Quader Chaudhury (1919–1973) was a Bengali politician who served as the 5th speaker of the National Assembly of Pakistan from East Pakistan. He belonged to Ayub Khan's Convention Muslim League. He was also the Acting President of Pakistan from time to time when Ayub Khan left the country. His elder brother Fazlul Kabir Chaudhury was the leader of the opposition in East Pakistan assembly. Quader was preceded by Maulvi Tamizuddin Khan of Awami League.

Chowdhury Tanbir Ahmed Siddiky is a Bangladeshi politician. He is one of the founding members of the Bangladesh Nationalist Party (BNP). He served as the State Minister for Commerce in the cabinet of President Ziaur Rahman and President Abdus Sattar. He served as the senior-most member of the Bangladesh Nationalist Party's (BNP) highest decision making body, the National Standing Committee, until he was expelled from the party in March 2009, which was withdrawn in November 2018 and he was reinstated in his previous party position. He had previously served as the president of FBCCI, the body that regulates businessmen in Bangladesh, in 1979 and DCCI in '76–'78. 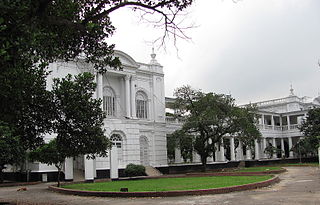 The International Crimes Tribunal (Bangladesh) is a domestic war crimes tribunal in Bangladesh set up in 2009 to investigate and prosecute suspects for the genocide committed in 1971 by the Pakistan Army and their local collaborators, Razakars, Al-Badr and Al-Shams during the Bangladesh Liberation War. During the 2008 general election, the Awami League (AL) pledged to try war criminals. The government set up the tribunal after the Awami League won the general election in December 2008 with a more than two-thirds majority in parliament.

On 5 February 2013, protests began in Shahbag, Bangladesh following demands for capital punishment for Abdul Quader Mollah, who had been sentenced to life imprisonment, and convicted on five of six counts of war crimes by the International Crimes Tribunal of Bangladesh. Later demands included banning the Bangladesh Jamaat-e-Islami party from politics including election and a boycott of institutions supporting the party.

Mir Quasem Ali was a Bangladeshi businessman, philanthropist and politician. He was a former director of Islami Bank, and chairman of the Diganta Media Corporation, which owns Diganta TV. He founded the Ibn Sina Trust and was a key figure in the establishment of the NGO Rabita al-Alam al-Islami. He was considered to be the wealthiest member of the Bangladeshi political party Jamaat-e-Islami. He was sentenced to death on 2 November 2014 for crimes against humanity committed during the Liberation War of Bangladesh in 1971 by International Crimes Tribunal of Bangladesh. The charges were denied by his relatives, stating they were politically motivated. Rights groups also raised concerns about these cases, with Amnesty International criticising the use of the death penalty and saying Mir Quasem Ali's trial had been unfair. He was hanged at Gazipur on 3 September 2016 after his final appeal was rejected by the Supreme Court of Bangladesh.

Syed Wahidul Alam is a Bangladesh Nationalist Party politician & a former Member of Parliament from Chittagong-5.

Swadesh Roy is a Bangladeshi journalist. He was awarded Ekushey Padak in 2017 by the Government of Bangladesh in the journalism category. He has over 22 books published, some of which include Muniar Chok, Chibuk Paharer Shada Murti, Mousumi Bou, and Meghnar Buke Lata. His most recent book is Ma Shukhtara Dhekten. He is also a political analyst.

Giasuddin Quader Chowdhury is a Bangladesh Nationalist Party politician and a former Jatiya Sangsad member from Chittagong-6 and Chittagong-7 constituencies.

AKM Fazlul Kabir Chowdhury was a Bangladeshi politician and former Member of the East Pakistan Assembly.

Nutan Chandra Sinha was a Bangladeshi businessman who was killed in the Bangladesh Liberation war and is considered a martyr in Bangladesh.

Abdullahil Amaan Azmi is a former Bangladeshi Army officer and the son of Ghulam Azam, the former Amir of Bangladesh Jamaat-e-Islami. He was a victim of Forced disappearance in Bangladesh.