Salhusfjorden is a 4-kilometer (2.5 mi) long fjord and sound between Bergen Municipality and Alver Municipality in Vestland county, Norway. To the west, it starts between the villages of Salhus and Frekhaug, where the Byfjorden meets the Herdlefjorden. To the east, the fjord ends between the village of Knarvik and the Hordvikneset peninsula, where the Osterfjorden runs northeast, the Sørfjorden runs southeast, and the Radfjorden runs north. The fjord is up to 500 meters (1,600 ft) deep. It acts as one of the borders between the districts of Midhordland to the south and Nordhordland to the north. The islands of Holsnøy and Flatøy lie along the northern side of the fjord.

Salhusfjorden is crossed by the Nordhordland Bridge, a 1,614-meter (5,295 ft) combined pontoon and cable stayed bridge. Because of the depth, the bridge lacks lateral anchorage. The bridge, which carries European Route E39, was opened on 22 September 1994. It is the second-longest bridge in Norway. [1]

The fjord takes its name from the village area of Salhus, which during the Viking Age in the early 12th century there was an inn (known at the time as a sáluhus), which would give name to the place. It acted as a transport hub for Nordhordland, and was a small market town. It was one of the first industrialized places when a hosiery manufacturer was established here in 1859. [2]

Previously, there were two ferry crossings of the Salhusfjorden. Starting on 7 July 1936, a ferry service ran between the villages of Isdalstø and Steinestø. In 1956, the ferry on the Nordhordland side moved to Knarvik, and it was the most trafficked ferry service in the country before the bridge opened in 1994. At first operated by Fergetrafikk, from 1967 it was run by Bergen Nordhordland Rutelag. [3] Until 1984, there was also a ferry crossing between Salhus and Frekhaug, operated by the same company. [4] 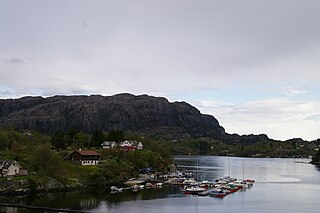 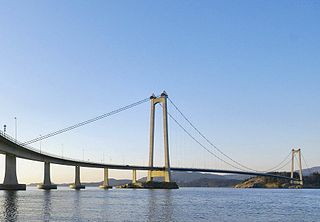 The Triangle Link is a fixed link with three branches that connects the islands of Stord and Bømlo to each other and to the mainland at Sveio, Norway. It consists of the underwater Bømlafjord Tunnel from Sveio to the island of Føyno, the Stord Bridge from there to Stord, and a road including the Bømla Bridge and the Spissøy Bridge to Bømlo. The section from Sveio to Stord is part of European Route E39, while the branch to Bømlo is part of County Road 542. 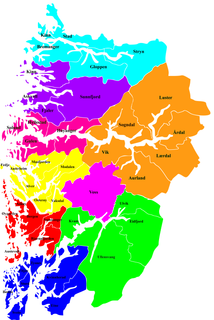 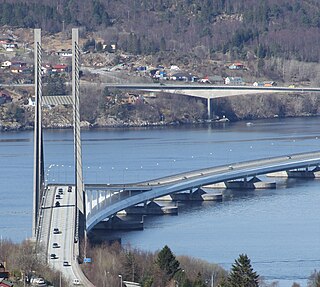 The Stord Bridge is a suspension bridge which crosses Digernessundet between the islands of Stord and Føyno in Stord Municipality in Vestland county, Norway. The bridge is 1,077 meters (3,533 ft) long, has a main span of 677 meters (2,221 ft) and a clearance below of 18 meters (59 ft). It carries two lanes of European Route E39 and a combined pedestrian and bicycle pathway. It is part of the Triangle Link, a fixed link which connects Stord to Bømlo, and both to the mainland. In 2010, the bridge had an average 5,021 vehicles per day. The bridge and the link was a toll road from the opening until 30 May 2013. 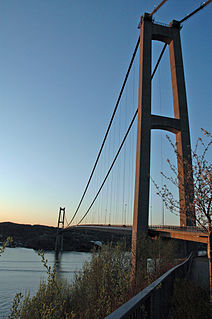 The Askøy Bridge is a suspension bridge that crosses the Byfjorden between the municipalities of Bergen and Askøy in Vestland county, Norway. It is 1,057 meters (3,468 ft) long and has a main span of 850 meters (2,789 ft). Its span was the longest for any suspension bridge in Norway, until the Hardanger Bridge was opened in August 2013. It carries two lanes of County Road 562 and a combined pedestrian and bicycle path. The bridge's two concrete pylons are 152 meters (499 ft) tall and are located at Brøstadneset in Bergen municipality and Storeklubben in Askøy municipality. The bridge has seven spans in total, although all but the main span are concrete viaducts. The bridge has a clearance below of 62 meters (203 ft). 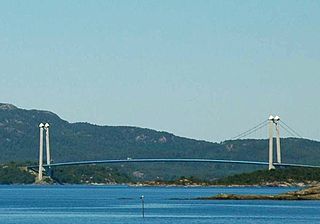 The Bømla Bridge is a suspension bridge which crosses Spissøysundet between the islands of Nautøy in Stord Municipality and Spissøy in Bømlo Municipality, Norway. The bridge is 998 meters (3,274 ft) long, has a main span of 577 meters (1,893 ft) and a clearance below of 36 meters (118 ft). It carries two lanes of County Road 542 and a combined pedestrian and bicycle pathway. It is part of the Triangle Link, a fixed link which connects Stord to Bømlo, and both to the mainland at Sveio. Plans for a crossing arose in the 1960s, and was until the 1990s planned as a pontoon bridge further north. The Bømla Bridge entered the plans after the decision to combine the crossing with the Bømlafjord Tunnel. Construction started in 1999; the bridge cost 342 million Norwegian krone (NOK) and was opened for use on 30 April 2001. The bridge is a toll road. 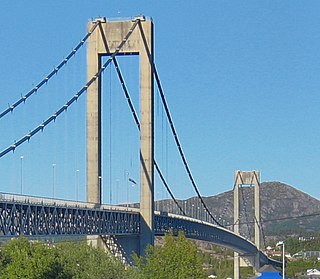 The Sotra Bridge is a suspension bridge which crosses Knarreviksundet between Knarrevik in Øygarden Municipality and Drotningsvik on the mainland of Bergen Municipality in Vestland county, Norway. It carries two road lanes and two narrow pedestrian paths of National Road 555, providing a fixed link for the archipelago of Sotra. The bridge is 1,236 metres (4,055 ft) long, has a main span of 468 metres (1,535 ft) and a clearance of 50 metres (160 ft). In 2007, it had an average 25,494 vehicles per day.

European route E39 is the designation of a 1,330-kilometre-long (830 mi) north–south road in Norway and Denmark, running from Klett just south of Trondheim to Aalborg, via Bergen, Stavanger and Kristiansand. In total there are nine ferries, the highest number of ferries for a single road in Europe.

Knarvik is the administrative centre of the municipality of Alver in Vestland county, Norway. The village is located on the mainland, about 20 km (12 mi) straight north of Bergen at the confluence of four fjords: Osterfjorden, Sørfjorden, Salhusfjorden, and the Radfjorden. The village of Isdalstø lies immediately north of Knarvik. 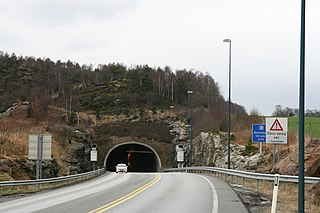 The Bømlafjord Tunnel is a subsea road tunnel under Bømlafjorden which connects the island of Føyno in Stord Municipality to the mainland at Dalshovda in Sveio Municipality in Vestland county, Norway. The tunnel is 7.82 kilometers (4.86 mi) long and reaches 260.4 m (854 ft) below mean sea level. It carries three lanes of European Road E39 and is part of the Triangle Link, a fixed link which connects Sunnhordland to Haugaland. Plans for the tunnel arose in the 1980s; construction started in 1997 and the tunnel opened on 27 December 2000. The tunnel was built using the drilling and blasting method, with two teams building from each end. The tunnel runs through an area composed mostly of gneiss, phyllite and greenstone. The tunnel was the longest subsea tunnel in Norway until the opening of Karmøytunnelen. It is still (2013) the deepest point on the E-road network. The tunnel was a toll road from the opening until 30 April 2013. In 2012 the tunnel had an average 4,084 vehicles per day.

The Oslofjord Tunnel is a subsea road tunnel which traverses the Oslofjord, connecting Hurum and Frogn in Norway. Carrying three lanes, the 7,306-meter (23,970 ft) long tunnel reaches a depth of 134 meters (440 ft) below mean sea level. The tunnel has a maximum gradient of seven percent. It acts as the main link connecting eastern and western Viken county, supplementing the Moss–Horten Ferry which runs further south. The tunnel is since 2018 a part of European route E134, until 2018 it was part of National Road 23.

Salhus is an urban settlement in the borough of Åsane in Bergen municipality, Vestland county, Norway. Salhus is located approximately 15 kilometres (9.3 mi) north of the city centre of Bergen. Salhus sits along the shore of the Salhusfjorden on the northern part of the Bergen Peninsula. The village area is located along Norwegian County Road 564, just east of the European route E39 highway and the southern end of the Nordhordland Bridge.

Krossneset is a village in Alver municipality, in Vestland county, Norway. The village sits on the island of Flatøy, about half-way between the villages of Frekhaug and Knarvik. 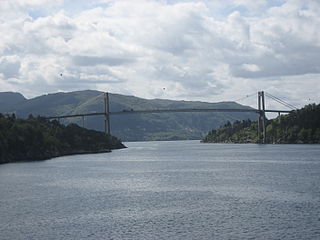 The Hagelsund Bridge is a suspension bridge in Alver Municipality in Vestland county, Norway. The bridge connects the island of Flatøy with the village of Knarvik on the mainland. The length of the bridge is 623 metres (2,044 ft). The length of the main span, i.e. the suspended roadway between the bridge's towers, is 250 metres (820 ft).

Flatøy is an island in Alver Municipality in Vestland county, Norway. The 2.2-square-kilometre (0.85 sq mi) island lies in the district of Nordhordland, just north of the city of Bergen. The main village on the island is Krossneset on the southern part of the island. The northern part of the island, on the southwest shore of Kvernafjord, is very sparsely inhabited. Historically, the island was one of the two main islands of the old Meland Municipality.

Osterfjorden is a fjord in Vestland county, Norway. The fjord is one of three fjords surrounding the island of Osterøy. The fjord runs along the municipal border of Alver and Osterøy municipalities. The fjord begins at the Romarheimsfjorden and flows to the west for 27 kilometres (17 mi) before ending near the village of Knarvik at the confluence of four fjords: Osterfjorden, Radfjorden, Sørfjorden, and Salhusfjorden. The Osterfjorden is generally about 1 to 3 kilometres wide and the deepest point in the fjord reaches a depth of 639 metres (2,096 ft) below sea level.

The Krossnessundet Bridge is a cantilever bridge in Alver Municipality in Vestland county, Norway. The bridge connects the islands of Holsnøy and Flatøy on the north side of the Salhusfjorden. The village of Krossneset is located at the eastern end of the bridge. Opened in 1978, it is part of County Road 564. It is 391 metres (1,283 ft) long and has a main span of 175 metres (574 ft).

Norwegian National Road 7 is a national road in Norway which runs from the town of Hønefoss in Viken county to the village of Granvin in Vestland county. The route is 387.6 kilometres (240.8 mi) long and runs east–west through Viken and Vestland counties over the vast Hardangervidda plateau.