Salingathu (Burmese : စလင်္ကာသူ [səlìɴɡəθù] , also known as Abdullah Shah 1455–1502), was King of Arakan from 1494 to 1502. The King, who came to power by overthrowing his eight-year-old nephew, Ran Aung, was extremely cautious about his personal security. He strictly regulated the schedule by which the gates of the palace and the city could be kept open. He employed many Household Guards in the Palace and around the capital, and always traveled with an extensive security detail. His chief Queen was Saw Mi Saw, daughter of King Ba Saw Phyu. He died of natural causes in 1502 at age 46. He was succeeded by his son Raza. [2]

Min Ran Aung was king of Arakan for six months in 1494. The eldest son of King Dawlya was only 8 when he was put on the throne by the ministers after his uncle King Ba Saw Nyo's death. The ministers also married the young boy to Saw Shin Saw, daughter of Ba Saw Nyo and his cousin. Still a child, the king had no interest in governing and spent much of the time playing. However, the ministers' belief that they could control the boy king was greatly shaken when the young king on a whim had one of the ministers drowned in a well. Concerned by the erratic behavior and for their own safety, the remaining ministers beheaded the king and handed the throne to his maternal uncle Salingathu. 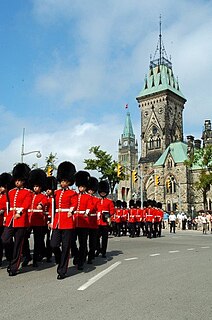 Household Division is a term used principally in the Commonwealth of Nations to describe a country’s most elite or historically senior military units, or those military units that provide ceremonial or protective functions associated directly with the head of state.

Min Bin was king of Arakan from 1531 to 1554, "whose reign witnessed the country's emergence as a major power". Aided by Portuguese mercenaries and their firearms, his powerful navy and army pushed the boundaries of the kingdom deep into Bengal, where coins bearing his name and styling him sultan were struck, and even interfered in the affairs of mainland Burma.

Narameikhla Min Saw Mon was the last king of Launggyet Dynasty and the founder of Mrauk-U Dynasty of Arakan.

Ba Saw Phyu was king of Arakan from 1459 to 1482. He acquired Chittagong in 1459, and put down a rebellion there in 1481. He established religious contacts with Ceylon and built the Mahabodhi Shwe-Gu Temple. Though he was beloved by his subjects for his enlightened rule, the king was assassinated by a servant of his eldest son Dawlya.

Ba Saw Nyo was king of Arakan from 1492 to 1494. He came to power in 1492 after his nephew King Dawlya had died after a failed military expedition. He made Dawlya's mother and his sister-in-law Saw Nandi his chief queen. He faced a serious mutiny by an officer, which was put down. He died of natural causes soon after.

Gazapati was king of Arakan from 1513 to 1515. The eldest son of King Raza by a concubine was placed on the throne by the ministers after he had successfully put down a rebellion, which his father had been unable to take on. However, the young king quickly proved to be a tyrant. He had his father killed soon after his accession, and mistreated everyone at the court. With his confidants running amok, the kingdom is said to have suffered a great economic crisis due to their mismanagement. The young king is also said to be a womanizer, sleeping with wives of generals whom he had sent to the front at the Bengal border. The ministers had him beheaded in January 1515, and placed Saw O, a granduncle of his, on the throne.

Min Saw O was king of Arakan for six months in 1515. He was a brother of King Salingathu. He was put on the throne by the ministers of the court who had beheaded his grandnephew King Gazapati. Saw O died only after six months of reign in July 1515. 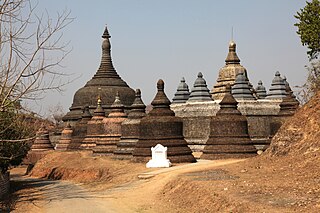 Thazata was king of Arakan from 1515 to 1521. He was a son of King Dawlya, and governor of Ramree when he was selected by the ministers to succeed King Saw O. He moved the palace from Mrauk-U to a place called Daingkyi. He died in 1521.

Min Saw Hla was king of Arakan from 1556 to 1564. At accession, he made his first wife Saw Bon-Htut the chief queen but also married his father's chief queen Saw Thanda. He ordered a massive building program which built and repaired dams, irrigation canals as well as improved the defenses of Mrauk-U and other key towns around the kingdom. In 1561, he commissioned the building of Htukkanthein Temple.

Min Sekkya was king of Arakan from 1564 to 1572. He succeeded his elder half-brother King Min Saw Hla, who had chosen him to be the heir apparent. The northern vassal of Tripura, which had submitted to Min Saw Hla, revolted and for a time, he lost control of Chittagong. He regained the city but his attempt to reassert control over Tripura was not successful. He continued the construction projects of his brother. He was married to his half-sister Dhamma Dewi but after she died, he married Saw Thanda, who had been queen of both his brother Min Saw Hla and his father Min Dikkha. He died of natural causes in 1572, and was succeeded by his paternal uncle Min Phalaung.

Min Phalaung was king of Arakan from 1572 to 1593. He presided over the continued rise of Arakan, begun under his father King Min Bin. He extended his realm to Tripura (1575) and northern Bengal (1586–1587), and withstood a major invasion by Toungoo Burma (1580–1581). He completely stayed out of the chaos in Toungoo Burma in the following years. Phalaung left a prosperous and confident kingdom to his son Raza II, who succeeded him in 1593. 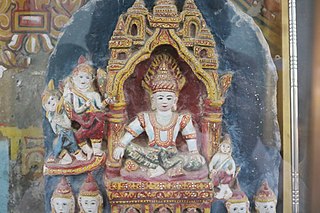 Min Razagyi was king of Arakan from 1593 to 1612. His early reign marked the continued ascent of the coastal kingdom, which reached full flight in 1599 by defeating its nemesis Toungoo Dynasty, and temporarily controlling the Bay of Bengal coastline from the Sundarbans to the Gulf of Martaban until 1603. But the second half of his reign saw the limits of his power: he lost the Lower Burmese coastline in 1603 and a large part of Bengal coastline in 1609 due to insurrections by Portuguese mercenaries. He died in 1612 while struggling to deal with Portuguese raids on the Arakan coast itself.

Min Dawlya was king of Arakan from 1482 to 1492. He came to power by having his father King Ba Saw Phyu assassinated after his father had chosen another son as his heir apparent. Dawlya proved an able king, however. Known as Hsinbyushin for possessing a white elephant, the king "extended Mrauk-U control to the east and west". He died on the war elephant after having returned from a failed expedition to the Chittagong Hill Tracts.

Minkhaung of Mrauk-U was king of Arakan from 1521 to 1531. He was a son of King Dawlya, and succeeded his elder brother King Thazata. He ascended the throne and married his brother's chief queen, Saw Nan-Hset. He was overthrown and killed by Min Bin, then governor of Sandoway (Thandwe) in 1531.

Min Dikkha was ruler of the Kingdom of Mrauk U from 1554 to 1556. He was the heir-apparent of the kingdom for 22 years during the reign of his father, King Min Bin. Dikkha was an able military commander who led the Arakanese navy in Min Bin's conquest of Bengal in 1532–1533. He led the Royal Arakanese Navy in the Taungoo–Ava War (1538–45), and in the Taungoo–Mrauk-U War (1545–47). He built the Koe-thaung Temple, the largest of all temples in Mrauk U during his short reign.

Saw Thanda Dewi was queen consort to four consecutive of kings of Arakan. She was the chief queen of King Dikkha. She later became queen to King Saw Hla and King Sekkya (1564–72), both of whom were her step-sons, and later to King Phalaung.

The Taungoo–Mrauk-U War (1545–1547) was a military conflict that took place in Arakan from 1545 to 1547 between the Taungoo Dynasty and the Kingdom of Mrauk U. The western kingdom successfully fended off the Taungoo invasions, and kept its independence. The war had a deterrence effect: Mrauk U would not see another Taungoo invasion until 1580. 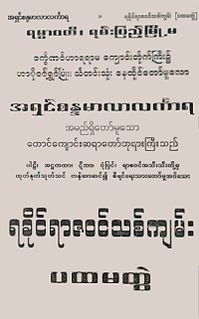 Rakhine Razawin Thit is a Burmese chronicle covering the history of Arakan from time immemorial to the First Anglo-Burmese War (1824–1826). The author was Ven. Sandamala Linkara, the Sayadaw of Dakhina Vihara Rama Buddhist Monastery in Ranbye Kyun in then British Burma. Published in 1931, it is a compilation of all extant prior Arakanese chronicles in a single narrative. The original 1931 publication consisted of seven volumes. The first four volumes were published in a single enlarged volume in 1997 and the remaining three were published in another enlarged volume in 1999.