Salvador Novo López (30 July 1904 – 13 January 1974) was a Mexican writer, poet, playwright, translator, television presenter, entrepreneur, and the official chronicler of Mexico City. As a noted intellectual, he influenced popular perceptions of politics, media, the arts, and Mexican society in general. He was a member of Los Contemporáneos, a group of Mexican writers, as well as of the Mexican Academy of the Language.

Novo defied the machismo and conservative Catholicism prevalent in 20th century Mexican culture by making almost no efforts to conceal his sexuality. [1]

He was, however, accepted by the Mexican government. He held official posts related to culture, was elected to the Mexican Language Academy, and had a television program on Mexico City's history. Towards the end of his life, he dyed his hair a bright carrot color and wore many ostentatious rings and colored suits. He has been compared to Oscar Wilde, but unlike Wilde, Novo never suffered the setback of scandal or persecution and remained an accepted and respected member of society and governmental circles until his death. In fact, some sectors resented the fact that a gay writer would align himself so closely with the government and media after the repression of social movements in the 1960s and 1970s.

He was well known for his wit. When a party, where young soldiers had been invited by gay scholar friends of his, had degenerated into a fight and a scandal, Salvador Novo brushed off the whole matter with a factual: "This is what happens when members of the intellectual elite try to enter military circles".[ citation needed ]

In accordance with tradition, the street on which he lived was renamed after him when he assumed the role of Mexico City's official chronicler, a post held for life.[ citation needed ]

Within a 1,000-sq.m.-land purchased in 1950, Salvador Novo decided to build, with the aid of architect Alejandro Prieto, the cultural project "La Capilla", for which purpose he adapted an old chapel as a theatre, which was inaugurated on 22 January 1953. Currently, this set also includes a small restaurant, "El Refectorio", as well as a theatre-bar "El Hábito". [3] 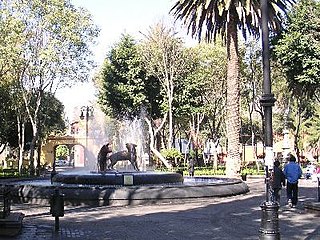 Coyoacán is a borough (alcaldía) of Mexico City and the former village that is now the borough's "historic center". The name comes from Nahuatl and most likely means "place of coyotes", when the Aztecs named a pre-Hispanic village on the southern shore of Lake Texcoco that was dominated by the Tepanec people. Against Aztec domination, these people welcomed Hernán Cortés and the Spanish, who used the area as a headquarters during the Spanish conquest of the Aztec Empire and made it the first capital of New Spain between 1521 and 1523.

Alejandro Carrión Aguirre was a poet, novelist and journalist. He wrote the novel La espina (1959), the short story book La manzana dañada (1983), and numerous poetry books. As a journalist he published many of his articles under the pseudonym "Juan Sin Cielo." In 1956 he founded, along with Pedro Jorge Vera, the political magazine La Calle. He directed the literary magazine Letras del Ecuador. He received the Maria Moors Cabot prize (1961) from the Columbia University Graduate School of Journalism as well as the Ecuadorian National Prize Premio Eugenio Espejo (1981) for his body of work. He was the nephew of Benjamín Carrión and Clodoveo Carrión.

José Emilio Pacheco Bernyaudio (help·info) was a Mexican poet, essayist, novelist and short story writer. He is regarded as one of the major Mexican poets of the second half of the 20th century. The Berlin International Literature Festival has praised him as "one of the most significant contemporary Latin American poets". In 2009 he was awarded the Cervantes Prize for his literary oeuvre. 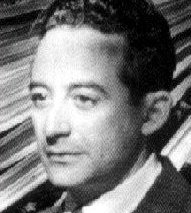 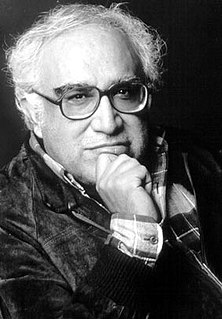 Carlos Monsiváis Aceves was a Mexican writer, critic, political activist, and journalist. He also wrote political opinion columns in leading newspapers within the country's progressive sectors. His generation of writers includes Elena Poniatowska, José Emilio Pacheco, and Carlos Fuentes. Monsiváis won more than 33 awards, including the 1986 Jorge Cuesta Prize, the 1989 Mazatlán Prize, and the 1996 Xavier Villaurrutia Award. Considered a leading intellectual of his time, Monsiváis documented contemporary Mexican themes, values, class struggles, and societal change in his essays, books and opinion pieces. He was a staunch critic of the long-ruling Partido Revolucionario Institucional (PRI), leaned towards the left-wing, and was ubiquitous in disseminating his views on radio and television. As a founding member of "Gatos Olvidados", Monsiváis wanted his and other "forgotten cats" to be provided for beyond his lifetime.

Estrella del Valle is a Mexican poet. She was born in Córdoba, Veracruz, in 1971 and studied creative writing at the Writer's General Society of Mexico.

Antonio Castro Leal was a Mexican diplomat and intellectual.

Efraín Huerta was a Mexican poet and journalist. Born and raised in the state of Guanajuato, he moved to Mexico City initially to start a career in art. Unable to enter the Academy of San Carlos, he attended the Escuela Preparatoria Nacional, where he met writers such as Rafael Solana, Carmen Toscano and Octavio Paz. He had been writing poetry since he was young, but initially opted to attend law school; however, when he published his first book of poems, he left it to pursue writing full-time. As a poet, he published regularly from the 1930s to the 1980s, and as a journalist collaborated with over twenty newspapers and journals, under his own name and using pseudonyms. He was also active politically, a communist and Stalin supporter through his life with his social and political ideas finding their way into his writing. Poetically, he is part of the Taller generation of Mexican poets, although his development was a bit different from others in this group. Near the end of his career, his work had developed a colloquial style, including work focusing on Mexico City and creating a new form called a “poemínimo.”

José Gorostiza Alcalá was a Mexican poet, educator, and diplomat. For his achievements in the poetic arts, he was made a member of the Academia Mexicana de la Lengua.

Alfonso Quijada Urías, is a Salvadoran poet and an author. Urías has published various poems such as the anthology "De aquí en adelante", in conjunction with the poets José Roberto Cea, Manlio Argueta, Tirso Canales and Roberto Armijo. Many of his works deal with the effects of war and the realities of urban life in Central America.

Alejandro Aura was a Mexican writer, essayist, poet, playwright and actor, as well as a culture promoter and television host.

Columba Domínguez Alarid was a Mexican actress, singer, and painter. She is remembered particularly for her performance in the film Pueblerina (1949). Domínguez was romantically linked for several years with the film director Emilio Fernández.

Gilberto Owen Estrada was a Mexican poet and diplomat.

Julio Barrenechea (1910–1979) was a Chilean writer, politician, and diplomat. He won the Chilean National Prize for Literature in 1960. 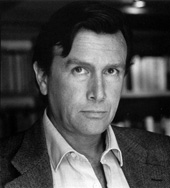 Francisco Serrano is a Mexican poet and writer whose multiple works also include opera librettos and publications in collaboration with painters. For over a decade, Serrano contributed actively to a variety of cultural affairs initiatives undertaken by the Mexican government.

Luis García Montero is a Spanish poet and literary critic, as well as a professor of Spanish Literature at the University of Granada.

Efraín Jara Idrovo was an Ecuadorian writer and poet.

Rebeca Mondragón Uribe (1912–1949) was a Mexican poet of the postmodernist movement. She gave recitations of her poems at the Teatro Degollado de Guadalajara (1913–1942). She also worked as the social secretary of actress María Félix from 1945 to 1949.