Samahni (Urdu : سماہنی‎) is a small town and tehsil in Bhimber District of Azad Kashmir, Pakistan, 17.9 miles (28.8 km) by road northeast of Bhimber. It lies in the Samahni Valley, an area noted for its production of medicinal plants. [1] In 2017 it had a population of 4,367 people. [2]

Samahni contains the Decree College library, [3] and a cricket ground. [4]

Baghsar is a lake situated at 975 m above sea-level in the Samahni Valley of Bhimber District in Pakistan's Azad Kashmir. The lake is roughly half a kilometre long and overlooks the Bandala Valley. The lake is a popular tourist destination.

Bhimber is the capital of Bhimber District, in the Pakistan-administered territory of Azad Kashmir. The town is on the border between Kashmir and Pakistan, about 29 mi (47 km) by road southeast of Mirpur.

Samahni valley is a valley situated on the LOC that separates Azad Kashmir from Jammu and Kashmir. It is 35 km long and about 8 km in width and covers an area of 1270 km2. By covered area, it is the largest valley in Kashmir.

Jandi Chontra is a town in Bhimber District, Azad Kashmir. It is a local tourist spot and is located 17 km from Bhimber city and 67 km from Mirpur. The area is known for its panoramic views. The Shrine of the Sufi saint Sheikh Baba Shadi Shaheed is also located here.

Jandala is a village in the Samahni Valley in the Bhimber District of Azad Kashmir, in Pakistan, about 6–7 km from Bindi. It has a roadside bazaar among the cultivated fields. Apart from retail, the bazaar provides medical, banking and postal facilities. Jandala has High, Intermediate and Graduation level private and state high schools and Colleges for boys and girls.It is central hub of all neighbouring villages.It is beautiful and scenetical view trapped by beautiful mountains. Nearby villages include Darhal, Barjun and Garhoon on the mountain, and Chadroon on the valley floor between Bindi and Jandala. The village is growing, and is becoming an employment hub for the area. The Most Famous thing of this area is a quality school and Colleges education in this category there are seven total schools and Colleges in Jandala Two State School one School and Three Colleges are private. Here the central educational competition.

Jandala may refer to one of several places and polity in modern Pakistan : 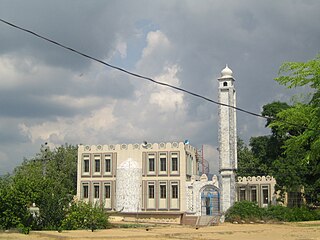 Location.Kalri is a village in District Bhimber, of Azad Kashmir. It is located equidistant between Bhimber and Mirpur – approximately 25 km on either side. At an altitude of 357 meters above sea level, it is situated at a latitude of 33.06 and a longitude of 73.9.

Baghsar Fort is an ancient fort built in Samahni Valley near Bhimber, Pakistan, close to a place known as Baghsar. The fort was constructed by Mughal rulers. It is currently closed to visitors, due to it being right beside the line of control between Pakistan and India.

Kot Jattan, is a village in U-C Dhandar Kashmir Pakistan, located within foothills of Himalayas, the village is situated in district and tehsil Bhimber. It has almost 400 houses with the population of approximately 4000. The Nearest facilities and conveniences can be found in the nearby towns of Dhandar and Kadhala.

Mirpur Division is an administrative division of Azad Kashmir, Pakistan. It comprises the portion of the former Mirpur district of the princely state of Jammu and Kashmir that came under Pakistani control at the end of te Indo-Pakistani War of 1947.

Barnala is a small city in the state of Azad Kashmir,Pakistan. The Barnala word means a city located on the edge of river. It serves as a tehsil (sub-division) of district Bhimber AJK.

LA-6 is a constituency of Azad Kashmir Legislative Assembly which is currently represented by the Chaudhary Ali Shan Sohni of Pakistan People's Party. It covers the area of Samahni Tehsil in Bhimber District of Azad Kashmir, Pakistan.